Remember when This Is Us‘ Randall told Déja she couldn’t visit Malik in Boston, and she told him that they were going to have a problem? That problem arrives this week.

In Tuesday’s episode, Beth and Randall learn that one of their teenage daughters is planning to graduate early and move to Massachusetts so she can live with her college-student boyfriend. And while their reaction — particularly on Randall’s part — is an instantaneous and vehement NO, that doesn’t change either of the lovebirds’ minds by the end of the hour.

Meanwhile, in another part of Pennsylvania, Nicky’s got game and Kevin strikes out. And in a flashback, Rebecca goes on her first post-Jack date, and Miguel notices. Read on for the highlights of “Heart and Soul.”

THE SLAP | Around the time that Kate is the only Big Three member left living at home, she mocks Rebecca for spending so much time hanging out and watching Who Wants to Be a Millionaire? With Miguel. So when Miguel gently points out that it’s time for Rebecca to get back out there, she agrees to attend a speed-dating event with him.

It goes very badly (and props to both Mandy Moore’s line readings and the editing here) because Rebecca can’t stop talking about Jack’s death. (“I wasn’t even in the room. I was eating a candy bar,” she tells one prospective suitor. Ha!) When she and Miguel are paired, they agree to bail if their next dates are duds. But when the bell dings, she finds herself sitting across from Matt, the PTA dad who asked her out for coffee soon-ish after Jack died. He’s kind, and the conversation flows freely; he asks her to grab a cup of joe with him after the event, and she agrees. (Miguel, in case you were wondering, is keeping an eye on all of this from the next table over.)

The date goes well, and Matt hugs Rebecca and gives her a peck on the cheek as he drops her off at home. Kate sees her mom get out of a strange car and gives her the third degree the moment she comes in the door. Kate gently informs her daughter that it’s time for her to start dating again, and that she knows Jack would want her to be happy. Kate disagrees, and she calls her mom a slut. Incensed, Rebecca slaps her, then cries as Kate stomps off to her room. Later, Rebecca cries as she calls Miguel to tell him what happened; Kate cries as she hears her mom talk about what a failure she feels like.

A SOUR NOTE | In the present day, Rebecca is helping Kate out with the kids when Toby calls and says he won’t make it home as planned because his boss invited him out on his yacht. Ugh I’m so done with you, dude. Anyway, the ladies make a plan for Rebecca and Kate to bring the kids to Kate’s school — because this is apparently a thing that is totally normal? — and it turns out to be a lovely day in which Rebecca plays piano for Kate’s choir as they sing Lorde’s “Royals.”

But Kate has something tough to tell her mom, and she does so when they get back to the house: Given Rebecca’s recent brain scans, Kate and Toby think it’s not a good idea for Rebecca to care for Hailey and Jack by herself anymore. Rebecca gets very angry and leaves. Later that day, though, Kate shows up at her mom’s house with an apology — and Rebecca apologizes in turn — and a plan for Rebecca to spend quality time with her grandkids by teaching Jack to play the piano. The episode ends with a montage of Rebecca and little Kate, Rebecca and sulky late teens Kate and Rebecca and adult Kate (with little Jack) playing “Heart and Soul” together. 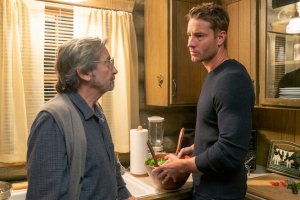 ‘WAIT, IS THIS A SEX THING?’ | Kevin heads to Pennsylvania to see how construction is coming along on the cabin he’s building for Rebecca. He calls Cassidy to see if she wants to meet him, Nicky and Nicky’s new girlfriend there; Cassidy is sad because her divorce has been finalized and her kid is with his dad for a few days, so she says why not? But then, “Wait, is this a sex thing?” she asks. They hash out that it might be a sex thing; after all, they’re both single and lonely. “Am I open to it? Yes,” Kevin says. “Am I expecting it? No.” She agrees to come. In a later call with Randall, Kevin explains everything that’s going on. “Try not to propose, OK?” his brother teases him. “You know how you get.”

At the cabin, Edie and Nicky are very cute and cuddly together. We learn that she’s been married three times and has two children; Nicky takes Kevin aside to worry that he might not be enough for such a worldly woman as herself. “Have you guys consummated yet?” Kevin asks, and I CALL HOOEY here. First, “consummated”? Second, KEVIN saying “consummated”? Nope. Nope, nope, nope. Anyway, the answer is that Edie hasn’t let Nicky fly her friendly skies yet, but she brought an overnight bag, so he’s hopeful. 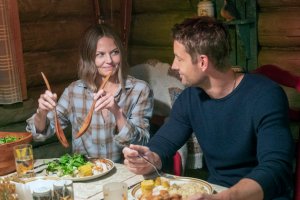 While his uncle and Edie are canoodling on the couch, Kevin takes Cassidy for ice cream. It’s all chill until he tries to hold her hand, and she balks. “There’s no reality to a relationship working with us,” she tells him. “Your inner darkness is not the same as mine.” She adds that he’s “chasing the wrong blonde in the wrong city,” and I think she means Sophie, but even Kevin admits that he’s unclear to whom she refers. Cassidy is very kind throughout all of this, but it still makes me sad when she says, “I’m too messed up already. Leave me in peace.”

STAR-CROSSED | Malik is back in Philadelphia for the weekend, and he wants to make dinner for Déja and her family; Beth and Randall are instantly suspicious. During a game of Worst Case Scenario, they envision pregnancy, elopement and other parental horrors. But what unfolds — hilariously, thanks in large part to Susan Kelechi Watson’s timing — is Déja and Malik’s announcing that she’s got enough credits to finish school, and that she’s moving to the greater Boston area.

Randall instantly rails against the idea, saying that Déja is too young to be making such a life-altering decision. But she’s ready for him. “I’ve lived a lot more live in my 17 years than a lot of people twice my age,” she says softly, “and you, out of anyone in this world, knows that best.” But Randall won’t be moved, and he gets up from the table in an angry huff.

He retreats to the front stoop, where Malik finds him as he makes his exit. Randall appeals to Malik’s love for Déja and asks him to end the relationship for her sake, so she can “find her own path.” Malik only says that he won’t tell Déja about their conversation, out of respect for her relationship with Randall, because “I can promise you she would not feel good about this.” (Side note: He’s right!)

Inside, Randall finds Beth eating blueberry pie out of the tin. He thinks they need to take a firm, no-moving stance. But she cautions him that they’re in dangerous territory. “Imagine that you were that age and somebody told you that you could not date me,” she reasons, her face grave. “You’re making a mistake, Randall, and we’ll lose our daughter.”