This Is Us‘ dads have a rough go in this week’s episode… and a flash-forward confirms what we already knew: that at least one of ’em has even tougher times ahead.

“Four Fathers” focuses on Jack, Kevin, Toby and Randall’s experiences as dads under duress. But while most of the stories in the episode are typical how-to-succeed-in-the-ever-shifting-sands-of-parenting affairs, Toby’s is a sadder look at how stressors start to pull a marriage apart.

On a lighter note: A Female Friend of Kevin returns. Could she be the unseen woman sharing his hotel room around the time of Kate’s second wedding? Read on for the highlights of the Jon Huertas-directed episode.

ROCKSTAR JACK IS BACK! | The episode opens with a flashforward to Rockstar Jack standing at a grill in his very schmancy backyard of his very schmancy home. Given the visuals, and the lack of kiddo, I’d place this after he already hit it big but before his wife, Lucy, is visibly pregnant. Jack makes a joke about letting the blind guy grill, but he seems to know what he’s doing, and Lucy doesn’t look worried. 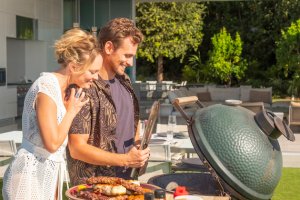 As he places some meat on the fire, Jack pauses and says, “I know it sounds crazy, but every once in a while, that smell hits me, and it takes me back to that day.” Lucy is supportive. “You know, you don’t need to keep using that thing. It’s the literal symbol of the day your mom and dad’s marriage blew up,” she says, pulling back his hair to reveal a scar. We also get a blurry memory — ostensibly from little Jack’s perspective — of Toby saying, “Don’t get too close, buddy” and then Kate yelling Jack’s name in panic. More on this later!

JACK GETS TERRIBLE NEWS | In a flashback to the ’80s, Jack Pearson arrives home late and is crestfallen to realize that he won’t see his kids awake that evening. “How did I become that dad, the guy who leaves before breakfast and gets home after dinner?” he moans to Rebecca. So he comes up with a plan to take The Big Three to the movies that weekend for some quality dad-kid time. 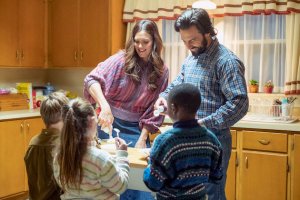 So they go to see An American Tail at the mall cineplex where Jack gets emotionally skewered, not by Fivel’s touching story but by little Kate wondering, “Are you gonna live at work forever?” Then he falls asleep during the movie, so a bored Kevin gets up and leaves. (Side note: I don’t have a Big Three As Kids favorite, but I definitely have a least favorite.) When Jack wakes up and freaks out because one-third of his children is missing, he grabs Randall and Kate and runs around looking for Kevin. He eventually finds him, and Rebecca, at the mall’s security office; when Kev was crying in the food court, a guard called home — thanks to the phone number Rebecca had written on the inside of her son’s sneaker.

Later, at home, Jack can’t stop beating himself up for literally falling asleep on the job. Rebecca tells him to forgive himself, reminding him that he has until the kids fall asleep that night to give them a better memory of the day. So he organizes a movie night at home, complete with make-your-own sundaes, and all is well.

Everything is great, that is, until right before bed. Jack gets a brief phone call, then hangs up. He looks at Rebecca with tears in his eyes. “My mom died,” he says. Oh no!

RANDALL ISN’T READY | In Philadelphia, an eager Randall takes Déja out for a driving lesson. She makes a point of pairing her phone with the car’s audio system, so they can listen to her music. But that backfires IN A BIG WAY when the phone starts reading aloud her incoming texts from Malik. She quickly moves to stop it, but an incensed Randall reminds her to keep her hands on the wheel as we hear the phone blow up her spot by talking about how she was in Cambridge the weekend before and how “the bed feels too big without you.” 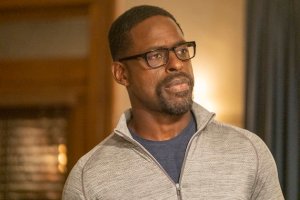 When they return home, Déja goes to her room while Randall and Beth angrily process her deceit — not to mention the fact that she left the state and had sex for the first time, and neither of them had any idea about any of it. They’re both hot, which leads Beth to very smartly suggest, “I feel like we need to pick which one of us is going to unravel and which one of us is going to stay cool.” Since Randall is so ramped up, he says he’s going for a rage run, which leaves Beth to talk with her daughter.

When Randall returns, Beth says of course they’ll take away her phone and dish out other punitive measures, but they’re on whole new ground now. “That girl is completely in love,” she says, comparing Déja and Malik to her and Randall back in the day and adding that she’s taking Déja to get birth control. So Randall calms himself and goes upstairs to talk to Déja. He’s very understanding as he asks her to be patient as he wraps his head around “this new, beautiful, grown-up you.” But he also forbids her from visiting Malik, to which she replies, “Well, that’s going to be a problem.” [Insert live studio audience noise: Ooooooooooh!] 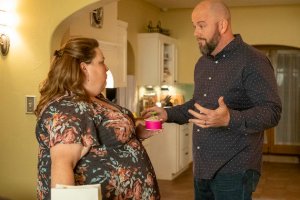 DADDY’S HOME! | As the season premiere hinted at, the long-distance thing is wearing on Kate and Toby’s marriage more than they expected it to. A montage shows them struggling with the set-up, though they both put on happy faces when Toby arrives home. And they’ve got a date planned, to see Kate’s students sing at a school concert, then to get frozen yogurt. But when Toby ignores Kate’s warnings and keeps Jack up past his naptime during the day, making the toddler a meltdown-y mess when the babysitter gets there, things get tense quickly. Toby volunteers to stay, letting the (honestly? WORTHLESS) baby-sitter off the hook. But he does it in a way that is weirdly passive-aggressive, and Kate is over it, so she goes to the concert by herself.

After the show, she kvetches a little to Phillip. He says she’s lucky that she feels the need to complain about the annoying little things about Toby; when he was married, he realized that he stopped doing so when he realized that the relationship was too far gone to fix.

‘LET’S BE SMOKERS!’ | Let’s put a pin in the Damons to see what Kevin is up to. Oh! Missing major moments in his twins’ lives! I kid, but it’s no laughing matter when Kevin misses out on Franny’s first steps because he’s at a social gathering with the members of The Manny reboot. He swings by Madison’s, but it’s late and the kiddos are already asleep, so he’s a little salty about how she gets to witness all the great stuff because she’s got the babies more often. She counters that she got puked on earlier in the day, and that neither one of them are going to have an idea parenting experience because “we’re not together. And that means that sometimes, one of us is going to feel left out.” Kevin seems appropriately chagrinned and, looking like he’s about to cry, asks Madison to tell Franny he’s proud of her. 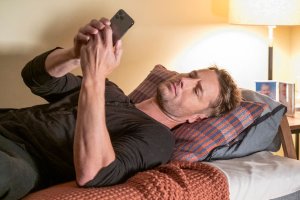 He returns home to Kate and Toby’s, where Toby has just gotten the kids down for the evening. They bemoan the fact that they never see their children. “I think kids would much rather have parents that are happy than parents that are together,” Toby says. “Yeah, but I’m not happy,” Kev responds.

When Kate comes home, Toby admits that he should be following her lead with the kids. And he says he’s going to buy them a smoker — which is the contraption Jack Damon was using in the flash-forward, it turns out — because “I don’t want all of our memories of this time to be of us being apart.” She likes the plan, unaware that they are teetering on the precipice of badness. “Let’s be smokers!” she cheers.

Meanwhile, Kevin texts Cassidy (!) to see if she’s awake. When they speak on the phone, he confesses that he was about to booty call his 20-something female Manny co-star who propositioned him earlier that evening, but Cassidy is a much safer call. This gets a laugh out of her. Could Cass be the woman in Kate’s wedding flash-forward?!