If you feel like you just got hit by a Mack truck driven by a 9-year-old, then you probably just got done bingeing Netflix’s The Woman in the House Across the Street from the Girl in the Window, a sendup of psychological thrillers — and like us, you probably have a few questions.

Among them: Was forensic psychiatrist Douglas (played by Michael Ealy) really stupid enough to take Elizabeth to work while profiling serial killer “Massacre Mike,” who had murdered and (gulp!) eaten at least 30 people? And how would Anna ever bring herself to forgive him?

“He means well,” series co-creator Rachel Ramras says with a laugh. “At the end of the day, [he and Anna] come to the conclusion that there really is only one bad guy here… and it’s the cannibal who ate their daughter. It’s no one else.” 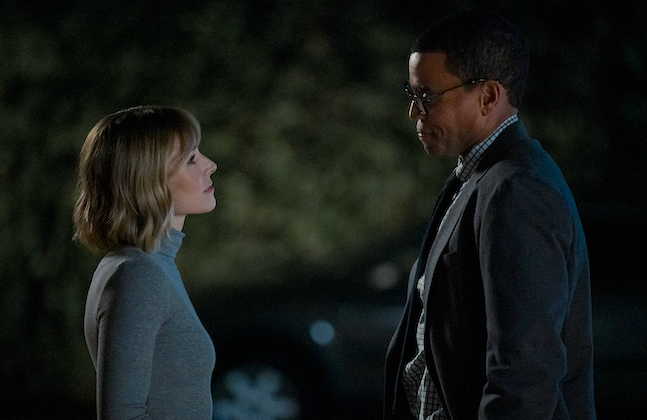 Those familiar with Ealy’s voice (from his previous roles on such series as Stumptown, Secrets and Lies and The Following) were probably quick to figure out that Douglas not only was Anna’s ex, but also her therapist, who — finale spoiler alert! — had accidentally prescribed her a class-four psychotropic. And it was only after she’d nearly died at the hands of Neil’s daughter Emma and felt, ‘ya know, like she’d just gotten hit by a Mack truck driven by a 9-year-old, that Douglas confronted his ex-wife about overmedicating her.

“Douglas is, um… he’s not a great therapist,” fellow co-creator Larry Dorf admits to TVLine. “I mean, he has Anna on the wrong prescription. But… he means well!”

As Ealy tells it, knowing Douglas’ intentions were always pure — and that he never gave up on Anna, even when everyone else thought she was off her rocker — was part of what helped him tap into the role.

“One of the things that was really helpful in terms of playing this character was that he was always very supportive of [her],” the actor previously told TVLine. “When most people think she’s crazy, he doesn’t. He believes in her. And I think it’s all about his true understanding of who she is and their mutual trauma. They will always have each other’s back, and that’s what makes [their] relationship special.”

Did you walk away from The Woman in the House thinking Douglas was the dumbest character on television? And if you were Anna, would you have given him a second chance?