Almost as soon as The Woman in the House‘s central mystery is resolved, a second mystery reveals itself involving The Woman in Seat 2A.

The limited series’ finale begins with Anna convinced that Buell is the killer. But upon entering Neil’s home, she finds the simple-minded handyman bleeding out on the floor (don’t worry, he lives) and a slain Neil past the point of resuscitation (R.I.P.). That leaves just one possible culprit: Neil’s 9-year-old daughter Emma (played by Samsara Yett), who confesses to Anna that she killed her pregnant mother, her unassuming teacher and her father’s girlfriend Lisa. What follows is a fight to the death between Anna and Emma, which culminates in Anna stabbing the murderous youngster in the chest with a shard from her broken casserole dish.

One year later, Anna and Douglas have remarried and had another baby. Anna leaves her husband and newborn daughter for a girls’ weekend with Sloane and boards a flight to New York, where she is seated next to a well-dressed businesswoman played by none other than the “grand dame of the psychological thriller,” eight-time Oscar nominee Glenn Close (Fatal Attraction, Jagged Edge). 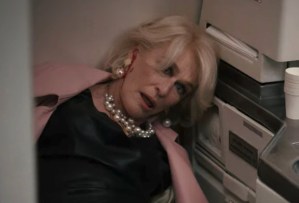 Midway through the flight, Anna gets up to use the bathroom and finds the aforementioned Woman in Seat 2A dead! Anna rushes to inform the flight attendant (hello, Community‘s Jim Rash!), but when he goes to check for himself, he finds an empty lavatory. And because one twist just isn’t enough, the flight attendant informs Anna that no one was ever seated next to her. (I’m sorry, what?!?)

Anna sits down and attempts to compose herself. Perhaps combining vodka and anxiety meds caused her to hallucinate The Woman in Seat 2A. But moments later, Anna looks over and finds a compact mirror that must have fallen out of The Woman in Seat 2A’s purse, setting the stage for a new whodunnit and a hypothetical Season 2.

TVLINE | Talk to me about the decision to make Emma the killer, and the fatal fight that follows…
RAMRAS | We knew it was going to be Emma from the beginning. It’s literally the most absurd person to [make] the killer, and in a series where we’re building the absurdity as each episode goes on, it felt very correct. We were lucky enough to find an actress like Samsara [Yett], who could pull it off, because you need to have [someone who can] play sinister as well as be adorable. And watching Kristen Bell fight a child is the funniest thing in the entire world. 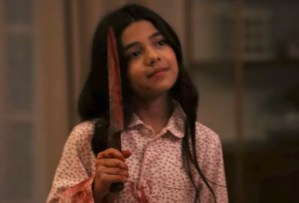 BELL | Samsara was very game — and a hell of a scene partner. We had to learn a choreographed fight sequence, and when you’re doing it with a 9-year-old, it’s essentially a dance. You have to really know where your body is in relationship to her. We did have a stunt double, but Samsara did quite a bit of it.
RAMRAS | We had an excellent stunt team and incredible choreographers. But Samsara and Kristen did a lot of their own stuff.
DORF | Our director Michael Lehmann was amazing… and it was done piece by piece. There was a lot of rehearsal that went into that. And we wanted a long, brutal, graphic fight. We didn’t want it to be a cartoony fight.
BELL | The thing I remember most about it is my hair and makeup [consisted of] dumping a can of mushroom soup on my head. That’s “Glamorous Hollywood” for you, I guess, covered in sticky soup for a week while shooting that scene! But the absurdity of that fight scene, of fighting a 9-year-old, I hope really makes people smile. It feels almost like a “gotcha!” moment from us to the audience. 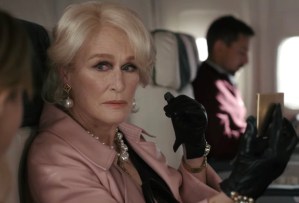 TVLINE | How did Glenn Close get involved?
RAMRAS | First of all, it’s just a miracle that it happened. She’s the grand dame of the psychological thriller, so it was the most incredible thing that it happened. She was the most game person. It was an elevator pitch, basically. I was on with her and her manager, and she listened and said, “I want to do it.” I was scared, obviously, meeting such a legend, but she couldn’t have been more fun or more game.
BELL | Having Glenn Close’s blessing on this, because she really is the queen of all queens of the psychological thriller, was incredible. I don’t really know how to describe the fact that she said yes, and then I was in a scene with her, and that this was the subject matter and she allowed us to poke fun [at it]. She kind of made the whole thing worth it.
DORF | She was at the top of our [wish] list. We always wanted to end with a great cameo of some type, but I don’t think we ever thought we would get her. 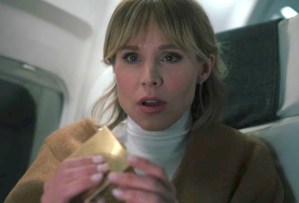 TVLINE | Anna returns to her seat and finds the compact mirror. Is this a legitimate cliffhanger, or is it only meant in jest?
DAVIDSON | We meant that just to excite the viewer. It was inspired, mostly, by novels like “The Woman in Cabin 10,” [where there is] an excerpt from the author’s next book at the end… Movies don’t generally do that, [so] we thought it was funny to do that in a show — to literally start us off on the next one in this one. So that was by design from the beginning, [but] there was a moment where Rachel, Larry and I spent, like, two days trying to figure out the plot to that ending. So we’ve got some pages somewhere…
DORF | It’s a juicy story!
RAMRAS | It really was just meant to be funny. Having it end with Kristen saying “Bingo!” also seemed like a nice end to it, because it really is Anna’s catchphrase, don’t you think? We’re going to start seeing it on t-shirts! [Laughs]

What did you think of The Woman in the House‘s twisty/turny finale — and the limited series as a whole? Would you like to see the show return for Season 2? Weigh in via the following polls, then drop your full review in the Comments.