Netflix’s The Woman in the House Across the Street From the Girl in the Window is as much a parody as it is an homage to psychological thrillers like The Girl on the Train (starring Emily Blunt) and the streamer’s very own The Woman in the Window (starring Amy Adams). It’s a tricky balancing act, tonally speaking, that falls largely on the shoulders of leading lady Kristen Bell.

“I definitely leaned more into the authenticity [than the satire],” Bell explains to TVLine. “I was confused about how to accomplish this tone, because the first couple of episodes are much more sincere, and then once we hook the viewer with the suspense, the absurdity starts to kick in.”

Premiering Friday, this “darkly comedic, wine-soaked” satire casts the Good Place and Veronica Mars alum as Anna Whitaker, an artist whose grief over the death of her daughter and the subsequent demise of her marriage to forensic psychiatrist Douglas (Stumptown‘s Michael Ealy) has left her a shell of her former self. When we first meet her, she is neither ready to take up painting again (despite the insistence of her best friend/art dealer Sloane), nor is she ready to reenter the dating pool (despite being set up by neighbor/resident town gossip Carol). Instead, Anna spends her days in her bathrobe, slurping comically large glasses of cabernet and downing a cocktail of prescription medications — an ill-advised combination that masks her pain just long enough to get through such page turners as “The Woman Across the Lake.”

One day, Anna looks up from her wine-stained accent chair and notices a family moving in across the street — a handsome widower named Neil (played by The Nevers‘ Tom Riley) and his 9-year-old daughter Emma (The Flight Attendant‘s Samsara Yett), the latter of whom reminds her of her own daughter. Before long, Anna makes their acquaintance and has a reason to leave the house again. 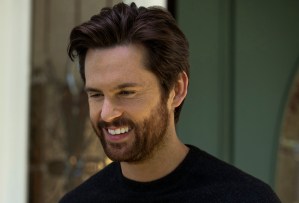 Neil represents Anna’s “way out from everything that she is feeling — her grief and her pain,” Riley says. “He fills that very specific role, the kind of ‘next-door neighbor who might be the future that she’s been waiting for all this time.'”

But just when it seems like Anna has finally turned over a new leaf, she bears witness to a truly gruesome murder. Or at least she thinks that’s what she saw. And it’s only after she starts “digging into Neil’s past,” Riley says, that Anna discovers that there is “more to him than she thought there was.” 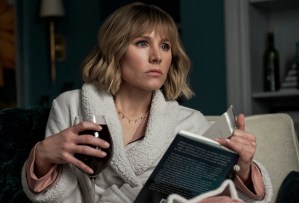 It’s at this point that Bell is forced to modulate her performance depending on the scene, as The Woman in the House tries to provide its audience with a genuine mystery and still generate sizable laughs.

“We’re definitely taking this genre, which is so fun but very cliché, and poking fun at it, so I was looking to the director and the writers and [asking] ‘Am I on track?,'” Bell recalls. “As an actor I want everything to feel real and authentic, and I want the scene to feel real and authentic, but you really just had to be at the mercy of the genre and go, ‘You’re not in charge as an actor, the genre is in charge. Just say these words that are on the page. There are people behind the monitors that are making sure what you’re doing is good.’ Sometimes I just felt like I was doing bad acting, and then I realized that is what this needed. It needed some good, bad acting.” 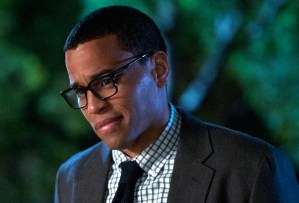 As Anna attempts to get to the bottom of this presumed murder, everyone around her begins to suspect she’s spiraling out of control — everyone except for ex-husband Douglas.

“One of the things that was really helpful in terms of playing this character was that he was always very supportive of Anna,” Ealy says. “When most people think she’s crazy, he doesn’t. He believes in her. And I think it’s all about his true understanding of who she is and their mutual trauma. They will always have each other’s back, and that’s what makes [their] relationship special.”

Watch a trailer for The Woman in the House below, then hit the comments and tell us if you’ll be adding Bell’s psychological sendup to your Netflix watchlist this weekend.