Not since Beauty and the Beast has a hand mirror been such a meaningful, romantic gift.

In Sunday’s 1883, Thomas purchased an ornate silver looking glass at a trading post, then shyly gave it to Noemi, the widow and mother he’s been helping since her husband died on the trail. “If I looked like you, I figure I’d stare at myself every chance I got,” he said.

As the show’s viewers know, Thomas is sweet on Noemi, though he turned down her pragmatic and mutually beneficial offer to be his wife several episodes ago. But life moves quickly when you’re on a wagon train, and now a romance has blossomed — as Noemi made official later in the episode by pointing out that his desire for her to feel safe and happy, “that’s love.” (Read a full recap.)

Gratiela Brancusi, who plays Noemi, tells TVLine that her and LaMonica Garrett’s characters come from very different backgrounds but share similar experiences, and that’s a big part of the attraction. “She can feel that he’s an outsider and that he’s someone who hasn’t been welcome in his own land, and she knows what that feels like,” Brancusi says. “I think she senses that, whether she knows what it is or not.”

Read on for more of her thoughts about Noemi and Thomas’ fledgling love story and how life in the wilderness is going to be an unrelenting ride (“no break!”) for the travelers for the rest of the season.

TVLINE | I have so many other, more important questions, but: How does Noemi never seem touched by the dust and muck that is all over the other characters? What is her secret?
[Laughs] You’d be surprised. I would wash my hair every night, and I had knots in my hair because of all the dust. It took me 30 minutes just to comb it. The hair department was just wonderful. Hair and makeup were just absolutely wonderful, so that helped a lot.

TVLINE | Noemi has lost her husband and is trying to care for her children in this very dangerous situation, but she seems rather self-assured, especially for a woman in her position at that time. Talk to me about how she is able to be that way in that very terrible situation.
I think it has to do a lot with her background. The thing that her and Thomas share is that they were born into slavery. She’s of Roma background. Roma people were enslaved, especially on the Romanian territory back in Europe, for about 500 years… They were hunting Roma people. They were considered sport. So I think there’s some sort of resilience that she’s built, that she has in her DNA. I would always think of this when there was a difficult scene, it’s like sort of evoking the ancestors. And also, I think she has to stay strong for her kids.

TVLINE | We don’t have a great sense of how her relationship was with her husband. Was it a loving relationship? What can you tell me about that?
I do think there was [love]. But I think it was a different kind of love than the love she’s nurturing with Thomas. And the culture back in the day, and even now in the more traditional tribes, a family sort of chooses the husband.

And at the time, it was definitely not her choice. She probably got married very young. I think she was probably still coming into her womanhood… And what I think is really wonderful about Thomas is that, in the culture…it’s a very patriarchal culture, and the woman serves to raise the kids and care for the husband and for the family but [is] not very independent. And I think what’s really beautiful about Thomas is that he helps build her up and teaches her all these skills, and it’s the kind of love that she hasn’t known before that. I don’t think she had that with her husband. I know she didn’t. 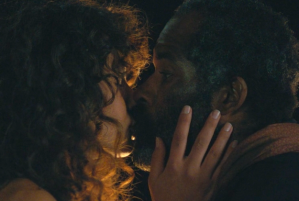 TVLINE | I love that Noemi is taking the lead in the relationship with Thomas. It seems he might have admired her from afar forever had she not stepped it up.
She’s very wise, and that has to do with trauma; a lot of times wisdom comes at the cost of trauma. And the idea of freedom, too… To her, freedom means the choice to be able to make choices, and then, whatever happens after that, happens, but just to be able to make choices — which is something I don’t think she was able to do home.

This is her step to freedom, to full freedom. She’s making a choice. It’s so bold, and I was so worried about it. Just because in the culture, widows remained widows for the rest of their lives. It’s considered a shame for a woman in the culture [to] do what she’s doing.

TVLINE | Thomas seems given to reticence — gestures, like giving her the mirror, play a big part — where Noemi seems more likely to say what’s on her mind. As they grow closer, what can you tease about how their different styles might compliment or clash with each other?
The mirror tells her that she’s on his mind and in his heart even when she’s not around him. We always joked, LaMonica and I, that it’s like an engagement ring. [Laughs] He wants her to see herself the way he sees her, because she struggles with feeling like a bad mother and a bad Roma woman and a bad widow, and I think he just sees a beautiful, bold woman, and he wants her to see that.

And that’s also something that I don’t think she’s experienced before. Also, she senses his loss, whatever loss he carries with him.

TVLINE | Coming up, what episode is going to blow people’s minds?
I mean, obviously, Episode 10….but the stakes are high from now on, definitely. No break!