I have a new, non-romantic supercouple to root for, and that couple is 1883‘s Elsa Dutton and Capt. Shea Brennan.

The way Brennan tends to Elsa and her gnawing, gutting, all-consuming grief in this week’s hour is one of the best things I’ve seen on TV recently. It’s a subtle and lovely exchange between two characters who at first don’t seem to have much — if anything — in common. And it made me hope for more interactions between Sam Elliott’s and Isabel May’s characters.

Read on for the highlights of “Boring the Devil.”

KINDRED SPIRITS | As the hour opens, Elsa is in a bad way, sobbing over the loss of Ennis while she lies in the back of her family’s wagon. They’re on their way to Doan’s Crossing, at the border between the Texas and Oklahoma territories, but Elsa doesn’t care much about that — or anything — right at the moment. At one point, likely prompted by a familiar twinge in her abdomen, she reaches into her pants and her hand comes away bloody. So anyone who was hoping that maybe Ennis put a little cowboy in her… my condolences.

Telling Margaret she got her period and wants to be alone (and yes, I doubted that the word “period” was used in this way in 1883, but apparently it was?), Elsa wanders off when the wagon train makes camp. Brennan finds the teen and knows that she’s drowning in her grief, so he tells her that he understands how she feels. He confides in her that he doesn’t much see the point of living anymore, partly because he doesn’t have anyone left who loves him. “But you do,” he says. He’s unashamedly crying a little as he relates all of this to her, and it makes me love him all the more. He wraps by saying that when you love someone, a part of them lives on in you, even as a part of you dies with them. So he’s going to stay alive at least until they make it to the coast. “So I’ll take my wife to the ocean, and I’m going to sit on a beach and let her see it.”

Buoyed by the thought of Ennis living on in her, Elsa hops on her horse and tells her mother she’s going “back to work.”

MAKING FRIENDS AT THE TRADING POST | But of course Elsa’s recovery is not that quick, nor that complete. The next day, when she accompanies her mother, father and brother to the trading post, a lecherous man won’t stop staring at her. She challenges him, he pushes back, citing her trousers as evidence that she must like the attention. So our girl pulls her gun on him, which is a very stupid move but which I really, really enjoyed. The guy pulls his gun in turn, and Margaret calls for James.

Papa Dutton puts the tip of his barrel to the man’s temple and tells him to skedaddle; the man does. James then angrily takes the weapon from his daughter, admonishing her not to take it out unless she plans to use it. “I was going to use it,” she grits out, right before James sends her back to camp. 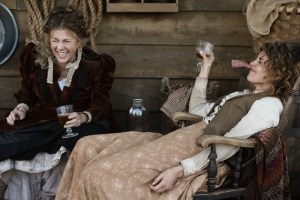 With that drama done, Margaret goes into the general store to stock up on some supplies but winds up getting three sheets to the wind with the proprietor (played by Rita Wilson). When James comes to collect his drunk wife later, she lashes out at him like she has in the past, only louder. “Wherever we’re going it better be paradise, because it’s costing us a daughter,” she says, pointing out that Elsa has killed one man and was ready to off another just for looking at her funny. Margaret says she’ll never forgive James for getting them into this predicament. “You don’t forgive me?” he asks. “I don’t forgive me!”

When he’s calmed a bit, he finds Elsa with the cows and tells her about his experience with killing in the war, but he tries to draw a distinction between what she did to the man who murdered Ennis. Because he was either going to die of his wounds or be hung by Brennan & Co., the guy was a goner — “You did not kill him, you understand?” James says, adding that “the meanest thing you can do to yourself is hate somebody else.” Before he rides off, he advises her to feel her grief in its totality but “leave the hating to me.”

The next day, Elsa seems much lighter. She’s back to herself so much, in fact, that she even starts flirting with Colton, the new cowboy who’s joined the wagon train. Brennan is pleased to see the girl smiling again and says as much. “You’re the only person that talked to me about him. Thank you,” she says, taking his hand and then kissing him on the cheek. 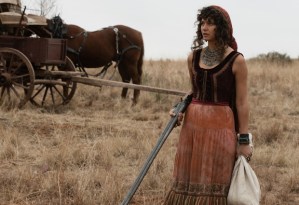 MAKING IT OFFICIAL| Remember how Brennan and Thomas talked about needing to hire a cook? They find one at Doan’s Crossing. And with that task accomplished, Thomas does as Noemi asks and takes some of her dead husband’s belongings to see how much cash he can get for them. The trader offers $35 for the lot, and Thomas takes the deal, but then notices a beautiful silver hand mirror among the man’s wares. He purchases it for her, then gives it to her that night at dinner, saying, “If I looked like you, I figure I’d stare at myself every chance I got.”

The look on her face is hard to read as she points out that “You won’t marry me, you won’t love me, but you’ll buy me gifts.” Thomas quietly says that she’s sad and scared, and “If I can give you something that makes you happy and protected, I don’t see the crime in it.” Wanting someone to feel happy and safe, she corrects him? “That’s love.” Gently but firmly, she makes him aware that her letting him take care of her isn’t fear. “It’s loving you back,” she says, taking off her shawl and pushing her dress off her shoulders so it can pool at her feel.

“Do I look scared to you?” she asks, and the answer to that is no, but Thomas looks absolutely terrified. (It’s so sweet!) She kneels in front of him, kissing him, and I awwwww a little in my heart while pushing away the 95 percent certainty that, now that I am on record caring about this couple, one of them is going to die a hideous death on the trail.

ONE AT A TIME | As the episode comes to a close, the wagon train starts another dangerous river crossing, one that’s going to take more time and manpower than they’ve got. The whole situation irks Brennan, who doesn’t want to have to hold the newcomers’ hands so much. “If they can’t cross a f–king river, how are they going to cross the mountains?” he roars. But ultimately he concedes that James’ plan — in which they eat up a lot of time by driving the settlers’ wagons across one by one — is the right one. But that doesn’t mean Brennan is happy about it.