Even when measuring against the many other emotional hits This Is Us‘ Jack Pearson has taken during the NBC drama’s run, Tuesday’s episode was a humdinger.

The hour unfolded completely within a flashback to the 1980s, to the week when Jack had to bury his mother, Marilyn. The subject matter put the heavy lifting on Milo Ventimiglia‘s shoulders, as Jack experienced intense regret over not getting to know his mother better after she successfully left his abusive father — and, of course, the crushing grief of losing a parent, which culminated in Jack’s painful sobbing in Rebecca’s arms at the end of the episode. (Read a full recap.)

TVLine spoke with Ventimiglia about his standout episode in the show’s final season and how a Season 3 episode figured into the request he made of co-star Mandy Moore right before shooting.

TVLINE | How far ahead did you know that Jack was going to lose his mom?
I guess toward the end of [Season 3], Dan [Fogelman, series creator] said that [Episode 4] was going to be a pretty big episode for me, and he just gave me the framework… I didn’t know much more about it until the script got published and we could all read it for production, and it was just heartbreaking. For me, the experience of losing a parent, I don’t know. I’m truly not looking forward to it. But I also understand there’s just so much yet to unpack as a person knowing that well, it’s done. Things are done.

The whole episode, where Jack is not only living in memory and remembering things from his younger years with his mom, but also having to confront just the logistics and everything before he gets to the point of realization that comes at the end of the episode when he says, “Rebecca, I don’t have a mom anymore.” It’s all just very heavy and overwhelming, and even though Jack has been the stoic lion rock that he is in making sure that nobody else suffers or deals any discomfort or anything, you know, he’s not impervious to it. He’s going to experience things the same as any other person.

So, going back in a very childlike way and saying to his wife, “I don’t have a mom anymore, it’s pretty heartbreaking.” 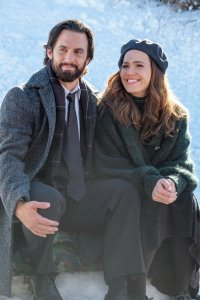 TVLINE | Talk to me about shooting that bit with Mandy Moore. What was the prep like? It’s such a big moment, I’d imagine you wouldn’t want to do it too many times.
We shot it chronologically from walking in the door. I think we had, you know, a few things before that whole sequence when they’re all getting back from the funeral the day in Ohio and to the food preparation and then the kids were sitting and eating and all of that. I remember just looking at the kids — and it’s all scripted, you know. Jack is feeding his kids this meal that his mom cooked for him when he was a little boy as well and I remember looking at Kaz [Womack, who plays Young Kevin]. Kaz looked up and smiled at me while he was eating, and it just crushed me — as it was intended to.

And I remember when we moved to the next sequence where Jack actually has to excuse himself and he’s in the other room, I remember Mandy just saying like, “Milo, what can I do for you, what do you need?” And I was like, “Just let me know that you’re there, you know?” But I think the man that Jack is, the product of the ’40s that he is, the man who went to war in the early ’70s, you know, he’s never going to show his emotion. So, knowing that his kids are in the other room and his wife is in there and all of that, he’d still keep his back to them, because he’d never want them to see it.

It’s like Season 3, I think, when they’re in the car and Rebecca’s singing a song and he has to turn away because he doesn’t want her to see how emotional that makes him. That’s just 100 percent Jack… So I was like, “Hey, just let me know that you’re there,” and cameras rolled and we stepped in, and I think I was on edge to begin with because of what we’d already filmed for the episode and working myself up for it. And Mandy walked in and put her hand on my shoulder and I turned around, and that was the scene.

TVLINE | I know everyone says this type of thing to actors, but as someone who does not have to do that in my line of work, I cannot imagine pulling that out of myself on command.
[Laughs] I mean, here’s the thing: I’ve been fortunate because Jack does not get emotional. He’s just not an emotional character, but it doesn’t mean that as an actor I can’t get myself there. It’s part of the job, it’s part of the resume, you got to be able to do those things in the special skills section… So, for me I think it was just really making sure that it was honest and it was real. And I absolutely was sweating with stress having to live through that realization and believe it the way that Jack believes it on camera.