Warning: The following contains spoilers about a new twist in Episode 3 of Hulu’s How I Met Your Father.

Tuesday’s How I Met Your Father introduces a fifth potential baby daddy: Jefferson Elementary vice principal Drew (Drake & Josh‘s Josh Peck), who strikes up a connection with Sophie upon their second time meeting. The first time, as we’d soon discover, was at Sid and Hannah’s engagement party, when Sophie tapped Drew on the shoulder and asked if he had a phone charger handy.

“In our pilot, [Sophie] makes clear that she met the father that night, which leaves a little bit of wiggle room as to who our father is,” series co-creator Elizabeth Berger previously told TVLine. “We’re going to have our core guys [Jesse, Sid, Charlie and Ian] which we hope and imagine people will be very invested in, but there will also be the larger world out there that we can draw from in terms of what happened all throughout that night.”

Episode 3 also delves further into Sophie’s backstory. After failing to correct Jesse in the pilot when he suggested that her parents must have been college sweethearts — in reality, Sophie’s mom was a “party girl” and her dad wasn’t even in the picture — Sophie opens up to the part-time music teacher about her messed up childhood. 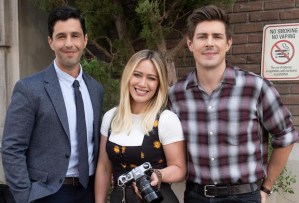 “It was just my mom and I, bouncing around from one boyfriend’s house to the next,” she tells him. “We were more like sisters than mother and daughter — and I was the big sister, always picking up the pieces after every breakup, and I got really good at fixing her.”

Berger confirms that Sophie’s backstory is significant to the story of HIMYF. “It plays a huge role,” the EP says. “There’s a certain coming to terms with her identity and where she came from… before she is ultimately ready to find her person.”

Adds Hilary Duff: “She’s never had a serious relationship — she blows it up before it ever gets there — and I think that’s because she has to sort out some childhood stuff, and boy is that relatable.”

What did you think of How I Met Your Father Season 1, Episode 3: “The Fixer”? Were you surprised to see another potential father introduced so soon? And have you given any thought to who Sophie’s mom and dad might be — that is, assuming we’ve already met one or both of them on How I Met Your Mother? Drop your thoughts in a comment below.