How I Met Your Father threw viewers for a loop at the tail end of Tuesday’s premiere, when the How I Met Your Mother sequel series revealed that Hilary Duff’s Sophie had already met the father – and he’s likely one of four men: Uber driver Jesse (Chris Lowell), Pemberton’s Pub owner Sid (Suraj Sharma), Tinder date Ian (Daniel Augustin) or British expat Charlie (Tom Ainsley). And that twist came after it was revealed that Sid and Jesse are the current occupants of the apartment that last belonged to Marshall and Lily.

“For me, [the bigger surprise] was this idea that we’ve actually met the father in the pilot,” Lowell tells TVLine. “That was something that was a departure from the original that I think is so exciting, and also unexpected for fans of the original. I love that it’s a completely different way to experience this (hopefully) multi-season mystery.”

From the onset, Lowell decided to throw out any expectations about who the father could be. “I almost have to forego all of the Future Sophie [scenes] talking about the past,” Lowell explains. “I’m just looking at the circumstances of this specific episode and what’s going on with our characters, because those are the only things that my character should know anyway.”

As for whether Sophie and Jesse might get together at some point, Lowell will only say this: “The will they/won’t they dynamic is as much about their love for each other as it is about their love for themselves, and learning what they’re actually looking for in a partner. A big part of their arc in this first season, separately, is learning who they are and what they need for themselves.”

Interestingly, Duff recently teased a “very meaningful moment” not with Jesse, but with the recently engaged Sid, who is trying to make things work with Los Angeles-based surgical resident Hannah. But just like Lowell, Sharma has learned it’s best to focus only on his character’s current set of circumstances. 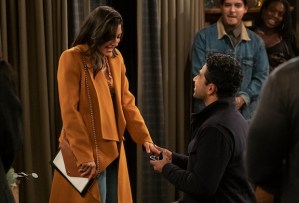 “For me, it’s about living in the moment, and for Sid to be true to what he is doing at the time,” Sharma says. “He is deeply, deeply in love with Hannah and is having a hard time with the long-distance relationship. He wants to make it work so bad. At the same time, his world is changing: He’s bought this bar and he’s trying to figure that out, and he’s made all these friends who are such weirdos, so I’m like, ‘OK, that’s his world. That’s the only world.'”

Ainsley, too, has tried to shut off the part of his brain that tells him that Charlie could be Sophie’s baby daddy, adding: “I don’t think you can look too far ahead, and I don’t think it would do justice to the relationship with Valentina.”

Who do you think will turn out to be the father of Sophie’s son? Log your early predictions in the comments.