When Apple TV+’s Servant returns for Season 3 this Friday, debilitating paranoia will take center stage — but that won’t be the only horror haunting the Turners. And if we’ve learned anything from watching the psychological fright fest for two seasons, we know things are undoubtedly about to get weird(er).

When we last left the family and its supernaturally inclined nanny, Leanne resisted and killed her former Church of the Lesser Saints leader Aunt Josephine, ultimately deciding to stay and protect the Turners at all costs. But with two more seasons to go before we reach the story’s end, the cult isn’t likely to fade into the darkness any time soon.

So how will the family move forward now that baby Jericho is back, and will Leanne ever be able to fully conquer her fears and her past? Ahead of its premiere this Friday on Apple TV+, executive producer/showrunner/director M. Night Shyamalan and his writer/director daughter Ishana Shyamalan talked to TVLine about Leanne’s fragile mental state, the series’ cinematic look and feel and why Season 4 is the right time to wrap up the Turners’ terrifying tale.

TVLINE | At the start of Season 3, Leanne is filled with all sorts of dread. What can you tease about her story arc for this season?
M. NIGHT SHYAMALAN | She is living under this paranoia for a long time that she’s inevitably going to get ramifications for what she did in Season 2. You can’t leave the cult that she left, and so they’re going to come and get her. This kind of paranoia is delicious — that every single person who comes in the house, every neighbor that visits, every person that drops off a package is potentially the cult. I think Season 3 is very muscular because of that, and very scary. It almost feels like a lot of Season 3 is the classic genre thing of being in a house when things are trying to get in. Like Night of the Living Dead, but a long-form version.

TVLINE | After the events of Season 2, what is the relationship between Dorothy and Leanne like?
ISHANA SHYAMALAN | Where they start out in Season 3 is actually a really beautiful place. They are all coexisting in this family unit and seeing if it can work as this family of four brought together by these crazy circumstances. It’s very fraught and beautiful in many ways, and we’ll see if it can work out.

TVLINE | Night, you directed the premiere, and Ishana, Episode 2. What was your favorite scene to helm from those episodes?
M. NIGHT SHYAMALAN | There’s a scene on the phone where Leanne’s drunk and kind of making a booty call to Tobe. I had so much fun! It tickled me getting [actress Nell Tiger Free] to be funny and drunk, and [playing] with a bathing suit [that Dorothy gives her]. One of the reasons I did that episode was to be there for Nell, to direct her and get a complicated, deep performance out of her because it was essentially her alone in the house. There’s also a scene where she’s free-writing in her journal, and the performance she gave was super powerful. I was so proud of her and really felt her growing and becoming this very complicated actor. That was a very rewarding moment.
ISHANA SHYAMALAN | For Episode 2, I reflect on it as being, thus far, the most fun episode that I shot because I was just surrounded by chaos. The mommy and me scenes [which can be seen in the trailer] were so fun because we had all these different characters and eight babies. It was just insane! That kind of craziness allowed us to all play together in a way that I think is hard to do in more restrained circumstances. Everyone just let themselves go. I was laughing the whole time. Those scenes for me were amazing.

TVLINE | As a storyteller, what are some of the benefits of having such a confined setting like the Turners’ brownstone?
ISHANA SHYAMALAN | The limitations are always helpful as a filmmaker, particularly a young filmmaker. They allow you to put all your energy and effort into specific elements, like cultivating frames we’re proud of and performances we’re proud of because there’s not so much else pressing on our shoulders. It allows you to get excellence in certain aspects of the world, which then make you feel the emotions of fear and sadness or whatever we want to feel in those scenes even more. 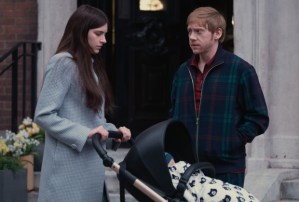 M. NIGHT SHYAMALAN | I will say that the misnomer is that limitations are how you begin your career. If you gave a ton of resources to someone beginning in their career, would that be better? And if you gave someone a ton of resources where they’re at in my career, would that be better? And I would say the answer is no in both circumstances. That’s what I’m trying to do myself, is say, “Alright, you’re at this place in your career, and I’m going to hyper limit the amount of tools and the place and how you do it. Now tell the story.” You’re going to activate me the way Ishana’s activated at the beginning of her career, really trying to solve things and figure it out, and thereby finding a really disciplined, minimalist language to the piece.

I love that it’s all in one home. I never think of it as a bad thing at all. And on a practical front, the house is there, and it’s one place, so it’s not like when we’re thinking about how to shoot a scene, we have to go, “Alright, let’s location scout and find the house, and then we’ll decide how to shoot it.” Ishana can just go right onto the set and start imagining. “Okay, I’m going to start here and come down here,” and that’s what you’ll see if you come to the Servant stages. I’ll be on one set directing, Ishana will be on the other set, [director] Kitty [Green] will be on another set looking and seeing, “Okay, I’m going to come onto the bed and come over here,” and then they’ll talk to the crew and say, “Hey, if I wanted to come through the wall, is there any way I could do that?” and they’ll figure it out because they’re thinking about it in advance. So, what you first think of as a limitation, “We’re never leaving this house, this same house!?” becomes this incredible asset because it’s the same house, and you get to really think it through very deeply.

TVLINE | Servant feels very cinematic to me. What kinds of elements help you give it that grandiose feel and vibe?
ISHANA SHYAMALAN | One element that comes to mind off the top of my head is that we all storyboard before we go into the episode. Every director is taking the time to plan out their shots and think about what framing would best accomplish the storytelling. I think that’s what gives it that distinct cinematic edge.
M. NIGHT SHYAMALAN | They all spend an enormous amount of time prepping and getting ready. The scripts are locked, the sets are there, they’re given latitude. The only thing I say to them is you can’t do something conventionally. Now I’m not saying be rebellious for rebelliousness’ sake. I’m saying, conventionality is a kind of approach to systemize storytelling so we can repeat it, and we can withstand, let’s say, the vicissitudes of talent that you might get. But I’m assuming everyone I’m hiring is excellent, so don’t do the safe thing. Don’t do wide shot, two mid-shots, two closeups, insert. Don’t think of it like that. Do the wide shot when you want to convey sense of space and blocking and movement, and really defend your approach to me when we watch dailies together. If I smell that it’s generic, if you’ve abdicated your responsibility in the storytelling, that’s the only way to fail on the Servant set. Go for something. If it misses, we’re going to reshoot it. We have that ability. I tell them that all the time. Risk.

TVLINE | The show was renewed for a fourth and final season. Why is Season 4 the right time to wrap things up?
M. NIGHT SHYAMALAN | It’s tricky because if you’re doing an episodic show, it’s not as problematic. But on a serialized show, you’re kind of going, “Did the audience like it? OK, we’ve got another season! What are we doing?” And then we go, “Wow, they really love it. Oh, the story… we’ve got to keep it going again!” And “Oh, Season 9, let’s keep on going!” And you feel that we’re just adding on additions to the house rather than [focusing on] its natural design.

It’s a tricky balancing act because the information that’s driving you is coming in yearly. Even though our audience has been growing so wonderfully and exponentially, it’s OK if on Episode 40 we have our biggest viewership of all time. Part of the reason I wanted to get to a finish line: I don’t want to be telling a story in relation to the decay or rise of the audience. Hopefully the audience will feel that integrity and it’ll resonate with them as they move forward.