Tuesday’s How I Met Your Father premiere tips its hat to Kim Cattrall’s predecessor.

The first episode of the How I Met Your Mother sequel series concludes with a title card in honor of the late Bob Saget, who died on Jan. 9 at the age of 65.

Saget for HIMYM‘s entire nine-season run provided the voice of Future Ted Mosby, who famously framed the CBS sitcom by telling his kids, from off-camera, about how he met their late mother, Tracey. Josh Radnor, who starred as present-day Ted, previously paid tribute to Saget, referring to the comedian as “the kindest, loveliest, funniest, most supportive man. The easiest person to be around. A mensch among mensches. 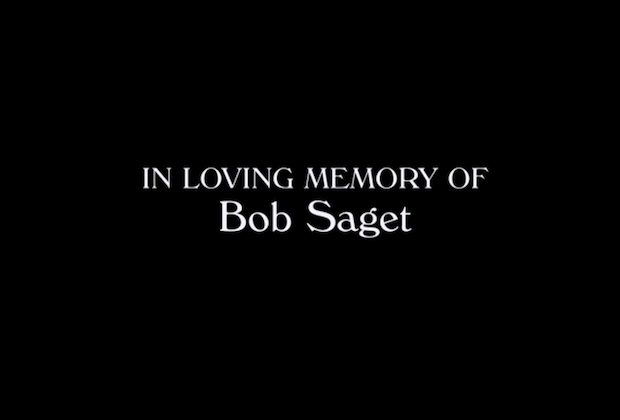 “There are people who leave the earth and you’re haunted by all the things you didn’t tell them, all the love that was unexpressed,” Radnor’s statement continued. “Luckily that wasn’t the case with Bob. We adored each other and we told each other. I’m endlessly grateful that HIMYM brought Bob Saget into my life. I’ll hear his voice in my head for the rest of my days.”

Whereas Saget served as an omniscient narrator on HIMYM, the spinoff places Cattrall front and center as the older version of Hilary Duff’s Sophie. The series premiere not only reveals how the two series are connected, but provides a new framework for the central mystery surrounding Dad.

Scroll down to see additional tributes from the HIMYM cast and EPs, then let us know if you were pleased to see HIMYF pay its respects to Saget.

Absolutely stunned to hear about Bob Saget. He was always so kind and generous and hilarious. Gone too soon. #RIP

One of the last DMs I got from Bob, begging me for the job as narrator of @HIMYFonHulu. #RipBobSaget pic.twitter.com/wwYJlhUL72

(One of the lamps from the #himym bar #RIPBobSaget) pic.twitter.com/rrHCcoZiEo