Insecure fans who aren’t in the #LawrenceHive weren’t the only ones rooting against an Issa and Lawrence reconciliation during Sunday’s series finale.

As showrunner and executive producer Prentice Penny revealed in the beloved HBO rom-com’s documentary Insecure: The End, he had his doubts — as did co-creator and star Issa Rae, as well as Jay Ellis, who plays Lawrence. (The film is now streaming on HBO Max and is airing on HBO throughout the month.)

Ellis also broke down his reunion hesitation because of how things fell apart in Season 4 when Condola revealed her pregnancy. 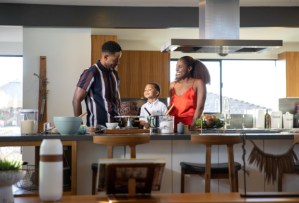 “I always rooted for Issa and Lawrence,” Ellis added. “And then, I honestly believe in Season 4, I got to the point where I was like, ‘Some things just don’t work out. They tried, and it didn’t work.”

Adding to the unlikely bliss and engagement that punctuated the series closer is the fact that Rae didn’t originally imagine the Lawrence character surviving Season 1, because he was such a romantic disaster.

“I didn’t think that Lawrence would make it past the first season, let alone the first episode,” Rae revealed, while comparing his character to Breaking Bad‘s Jesse. “But Jay Ellis is so great. He was just so phenomenal.”

Do you think Issa and Lawrence are soulmates on Insecure, or were you hoping for a different outcome? Read our recap, and drop your thoughts in the comments.