“Look for the funny because it’s coming,” Kenan Thompson tells TVLine of his NBC sitcom Kenan, which will ring in Season 2 on Monday, Jan. 3 at 8/7c.

Before then, the series will air a special holiday episode as part of the network’s Christmas-themed comedy slate (also featuring new episodes of Young Rock and Mr. Mayor) this Wednesday, starting at 8/7c.

Kenan’s second season will spotlight more of its supporting characters, like Kenan’s brother Gary (played by Chris Redd), which Thompson fully supports because it both takes some of the pressure off of him and gives his castmates a chance to shine. “We all have our individual careers that we are pursuing at the same time, so it’s nice to see everybody get that opportunity,” he shares.

The show began with a more serialized concept before landing on the episodic format, giving audiences a chance to drop in at any time. The new season leans further into that as Kenan explores life as a widower, taking on new challenges such as dating apps, which fans will see in the season premiere.

“I just wanted the show to mature and start to look like more of a natural existing thing, instead of something that was just filled with exposition,” Thompson explains. “Whenever I watch reruns of Martin, it didn’t matter what season. It was just like, ‘Any episode, let me tune in with this group because I know there’s funny stuff that’s going to be happening for the next half-hour.’” 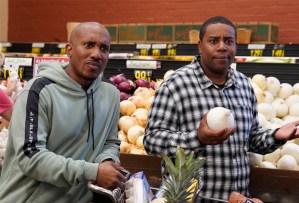 What’s matters to the veteran comedian is that audiences aren’t just tuning in, but also enjoying themselves. “If the show wasn’t funny, that would be more of the heartbreak for me,” he says.

“The fact that not enough people tuned in right when we needed them to, and then they catch it later? I can live with that. But if people say that they didn’t laugh at the show at all, then I’m like, ‘Wow, we really wasted a lot of time, and I obviously have no instincts for comedy.’” But he says that hasn’t been the case, which makes him excited to share the series with everyone.

Thompson, who splits his time between Kenan and Saturday Night Live, hopes to continue doing the sitcom for long as he can, and as long as there’s still new territory to explore. “There are all kinds of potential for shows. Supernatural ran, like, how many seasons? It what it is. Like, instead of doing a reboot, just keep doing the show.”

He may soon add The Mighty Ducks: Game Changers to his already full slate — that is, if they can work out the scheduling. The actor is down to reprise his Mighty Ducks film role as Russ Tyler in Season 2 of the Disney+ series, which is expected to start production early next year.

“I would love to do it if they can figure it out,” Thompson notes. “I told [Game Changers showrunner Steve Brill] I wanted to do Season 1, but they ended up having to do it without my participation [due to scheduling]. There’s only one me. I can only be in one place at a time.” When the schedules do align, though, he promises: “I will do my best, because I still can skate.”