Despite playing phone tag with her ex a few weeks ago, Issa kept her focus on her career and Nathan and both seem to be going quite well. Nathan has been leaving his belongings at her place, so much so that she joked “‘mi casa’ is starting to look like ‘we casa.’” Nathan casually floated the idea that they move in together, and Issa took it under consideration.

Meanwhile, the Blocc is popping. Issa even got Anthology Collective, who shot down an opportunity to work with her after what happened with Crenshawn (Kofi Siriboe), to change their mind. Plus, Crenshawn apologized for blowing up at her over Twitter and invited the rising entrepreneur to team up again on his upcoming store opening. Later that day, she received an email offer about partnering with Nothing But Water, which came with a big paycheck.

Fantasizing about the future after teaming with NBW, Issa imagined herself being extremely successful and constantly traveling around the country. In this dream sequence, she’s speaking on panels, meeting Ty Dolla Sign in First Class and living with Nathan in a fancy home. 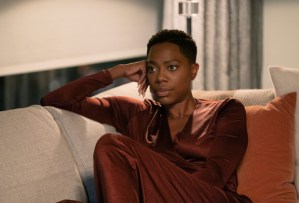 Back in reality, she met with Crenshawn and expressed her reluctance to work with him. After the meeting, she imagined what would happen if she partnered with him. In this future, they’re opening a new store with a line wrapped around the corner. She even receives key to Inglewood from Tyra Banks, and Aug. 12 is declared Issawood Day. She’s still with Nathan, but her living situation hasn’t changed. She remains a building manager and lives in her same tiny apartment. And when Dream Nathan says he’s proud of her, that voice becomes Lawrence, who congratulates her on making the choice that made her happy.

Snapping back to the present, Mirror Issa reminded her there’s a voice in the back of her head saying she’s not done with Lawrence yet.

Elsewhere, Molly spent the day having an uncomfortable conversation with her parents about their will. Much of her dad’s 401K went to paying her mom’s medical bills following her stroke. Plus, after working for 50 years, her dad worried he was leaving nothing for his kids. Kelli eased the tension by offering to set up a special savings account and the conversation continued.

With her parents’ will finally finished, Molly broke down in the car. She also canceled a date with Taurean, who understood how she was feeling because he’s a good dude. Unprompted, he sent her wine and wings to make her feel better. Did I already say Taurean was a good dude? Because he really is.

In a phone call with Molly, Issa expressed worry over her two choices. Would she be a sellout if she went with NBW? Is it too much of a risk to go with Crenshawn? Molly assured her there’s no wrong answer and urged Issa to go with her gut because she already knows what she’s going to do. That seemed to calm Issa’s nerves.

Back at home, Nathan got Issa her favorite fries for dinner and told her he wants for her to be happy and she briefly imagined those words coming from Lawrence. No matter how hard she tries, she still can’t let him go completely.

Get scoop on Issa’s multiverse, Molly and Kelly’s prospects in this week’s Insecure post mortem.