If only we could smash an hourglass to go back in time to the days before advantages.

After two decades of outwitting, outplaying and outlasting, Survivor has more than proven its staying power. Any series intending to stick around in the competitive landscape that is broadcast television must be malleable… just like the best castaways who’ve played. But have we reached the era of Peak Advantages, and have all of these drastic changes hindered gameplay more than helped it?

Though many of us longtime viewers would love to watch an “old school,” advantage-free game, Jeff Probst said it himself: It ain’t gonna happen. “If we eliminated the ability for a player to shift the game with an advantage or pull off a blindside with an idol, you would be left with a majority of very predictable Tribal Councils,” the host told TVLine in September. “Predictability is death.” Can’t argue with that.

The addition of these special powers (like the idol nullifier, juror removal and the extortion advantages) rearrange the chess pieces, so to speak, and have created some very dramatic Tribal Council moments throughout the years. Now that the show has acclimated to these gimmicks, it would be nearly impossible to put the genie back inside the bottle. 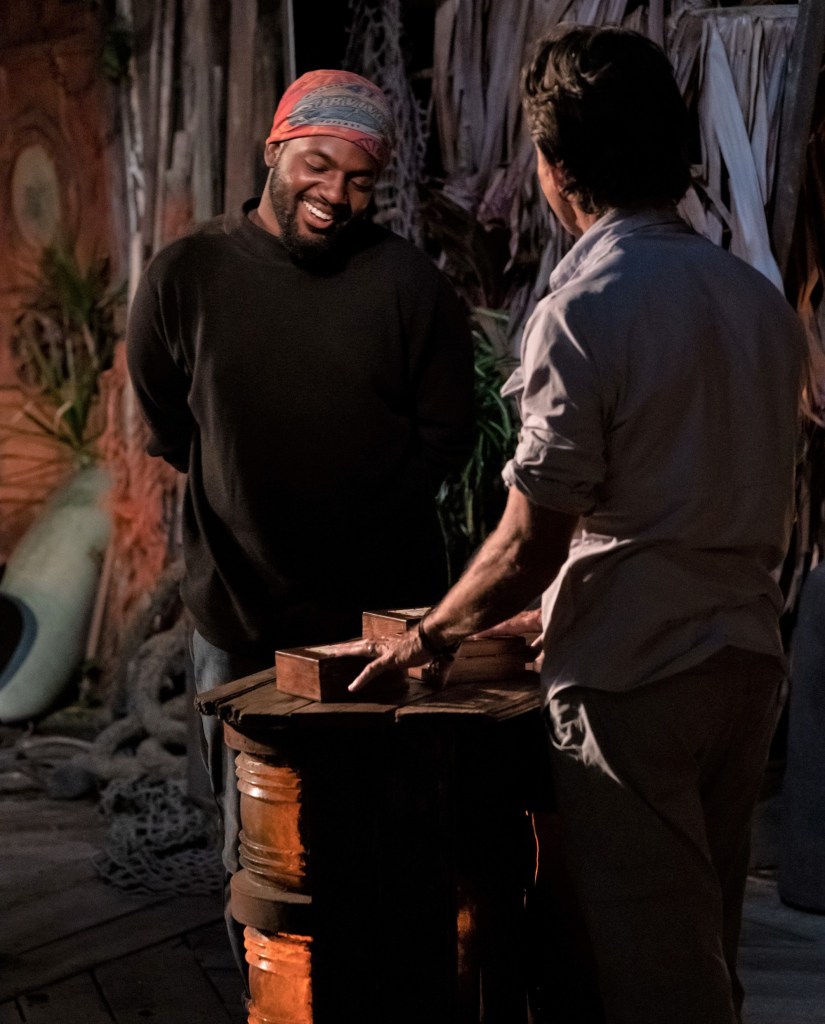 However, a few of the twists and advantages introduced in Season 41 have begun to affect the game beyond reason. In the most recent episode (read our recap here), Deshawn almost fell victim to a mysterious new twist: the Do or Die challenge. Since he was out first in the immunity challenge, he was forced to play a game of chance at Tribal Council. It was a classic Monty Hall problem where he had to choose the correct box out of three, otherwise, his torch would be snuffed. Shockingly, he survived Probst’s carnival game, but how tragically terrible would it have been to see a player knocked out of Survivor by chance? Did it create a tense Tribal moment? Yes. But we don’t want to see someone go down like that! (Plus, if Deshawn had lost, it would’ve prevented us from having a Tribal vote, which would’ve been both counterproductive and, frankly, boring.)

And how about that terrible, horrible, no good, very bad hourglass twist? Not only did Ricard, Danny, Sydney, Deshawn, Evvie and Naseer win their immunity fair and square, but Probst then offered Erika the chance to not only be safe, but to shift the immunity over to the challenge losers. Giving one player the opportunity to change the outcome of a challenge is mind-numbingly irritating for us, and borderline unfair to its players. Someone make that make sense. (Luckily for Erika, the twist may have saved her life in the game.) If I had been taken out by a twist that not only stripped me of my hard-earned immunity, but left me as one of only five sitting ducks, I’d be shouting just as many F-bombs as Sydney did in our exit interview.

I can concede that twists, to some degree, are necessary to keep things spicy. We watch to be entertained, and no one wants to see another Pagong-ing or Palau situation. But many of 41‘s advantages and twists have placed far too much focus on sheer luck, as opposed to well-thought-out strategy. Compounding all of this is the fact that the beware advantages and idol rules have grown so complicated and multi-layered that they eat up precious minutes of airtime to explain. From the prisoner’s dilemma scenarios to the secret phrase idols, too many precious minutes have been wasted simply setting up these toys, which takes away from the true heart of the game — camp life and social relationships. With less time focused on the players’ interactions, the less insight we have as to why players make the decisions they do.

Survivor should get a lot of credit for keeping its show fresh and outlasting much of its competition. But sometimes, less is more, and fewer advantages and twists could help the game get out of its own way so that the next generation of Survivor hopefuls can soar. After all, we don’t need a repeat of Cirie’s Game Changers exit.

But enough of my griping! What do you think of the show’s recent changes? Vote in our poll below, then let ‘er rip in the Comments!