The road to Survivor 41 was long and bumpy, but the wait is officially over!

Season 41 touches down Wednesday, Sept. 22, at 8/7c with a two-hour premiere on CBS, and if you’re a Survivor junkie such as myself, you’ve likely been jonesing for a fresh batch of hopefuls to hit that glorious Fijian sand.

Thanks to a certain global pandemic, the show has been off the air ever since crowning the victor of its all-winners season on May 13, 2020. Since then, the competition suffered multiple delays while attempting to resume production, both in Fiji and stateside.

With all of that downtime, host Jeff Probst and his team revitalized the game in order to usher in a brand-new era of the series. “Reimagining the show was a great personal reminder to me of one of the mantras of the game: You must learn to adapt, or you’ll be voted out,” he said.

Below, Probst takes TVLine behind-the-scenes of the show’s recent creative decisions, including the fate of the fire tokens and how the show’s Powers That Be made the 26-day version of the game that much more difficult. He even lets us in on why a “back-to-basics” season probably isn’t in the cards.

TVLINE | Due to COVID, it’s understandable why the game was shortened to 26 days, but was it a difficult decision, creatively? The 39-day length seems like such a vital part of the show’s DNA.
JEFF PROBST | It’s interesting how fast you can pivot when you have no options! Once we decided to change the game to 26 days, we immediately began to reverse engineer how to ensure that those 26 days would be as difficult as our typical 39-day game. That was the key to everything. We started with a very big change — we eliminated their daily food source. No rations of rice. That, in and of itself, is a complete game changer. It hit them hard. And we cut back dramatically on rewards, so food in general was extremely scarce. This impacted their cognitive abilities within the first several days. To further complicate the game, we started with only six players on each tribe, which means you are in real danger every single time you go to Tribal. From there, we started adding in more dangerous advantages and twists.

It was a very exciting process for our team. Reimagining the show was also a great personal reminder to me of one of the mantras of the game: You must learn to adapt, or you’ll be voted out. We had no choice. We had to adapt, and we did. That is how every player must approach the game.

TVLINE | Were players told up front about the shortened timetable?
A few days before we begin the game, we always meet with the players for one final check-in. At that time, we shared that the game would only be 26 days. This was a shocker. And even though players are still not allowed to talk, it was clear from their silent reactions that they thought this meant that Survivor 41 would be some sort of an asterisk season, a “COVID season.” We assured them that the game had been adjusted accordingly and to trust us that Survivor 41 was designed to launch a new era of Survivor, and nobody would be complaining about 26 days when it was over!

TVLINE | What was behind the decision to drop the theme, and simply title this one “Survivor 41″?
We always knew that after Survivor: Winners At War we would be doing a refresh on the format and the gameplay. One of the fundamental elements of the refresh was to step away from centering an entire season around big casting themes or twists. It served us very well for 20 years, but it was time to change. So we decided we would simply call the seasons by their number, which gives us more flexibility in how we design a season. But rest assured, this doesn’t mean there won’t be new advantages or controversial twists. It just means we don’t have to base the entire season around anything specific. We’ll stick with this for a bit and see how it goes! 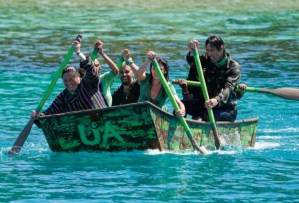 TVLINE | How about the fire tokens? Will they be back this season?
Funny story about those fire tokens. The original idea for Survivor 41 was to birth a new version of Survivor formed around an economy. Players would earn tokens by completing tasks or winning challenges, they could wager their fire tokens to earn more, and could then purchase items with their fire tokens. We spent many months working out the minutiae of the actual economy and a pricing system for items. Fortunately, that creative was trashed in favor of focusing on ideas that simply made the game more fun. That was the only thing we cared about: Was it fun? If so it went into the creative hopper, and if not, it was tossed in the bin. I’m happy to report that we came up with a lot of very fun and very dangerous ideas!

TVLINE | How much do advantages play into this evolved game? Could a “back to basics” season (one without advantages, and perhaps limited idols) ever come to fruition?
One of the most common pitches I hear from fans is that we should do a season where there are no advantages, no twists and maybe even no idols. “Let’s go old school, Probst!” I completely understand the big-picture appeal of “going back to the basics” and on the surface, it does sound fun. But once you actually dive into the impact it would have on storytelling, some cracks begin to emerge. I agree that the early, advantage-free seasons of Survivor were absolutely fascinating, but this is due in large part to the fact that the players were still learning the game. They didn’t fully understand all the existing dynamics of the format.

With each season, the players have gotten smarter. And as a result, the gameplay has evolved and become much more sophisticated. If we eliminated the ability for a player to shift the game with an advantage or pull off a blindside with an idol, you would be left with a majority of very predictable Tribal Councils. Predictability is death. What we’ve done in Survivor 41 is do a full reset in terms of survival and gameplay by leaning into the best parts of what makes Survivor fun. I think fans are going to enjoy it!

TVLINE | I can’t tell you how many people have been texting me about “discovering” Survivor during the pandemic. Anything you’d like to share with new viewers who are just now making their way to the island?
During the quarantine, I heard from so many people about “friends of friends” discovering Survivor. This was such an unexpected surprise! It made all of us on the team so happy because we have always believed that if you watch just one episode, you’ll be hooked. Survivor 41 is the perfect first new season to watch because we really are birthing a new era. So you don’t have to know anything about past players or themes. We are all coming in fresh together. I am enormously excited to share our new season and new group of players. It really is a fun season with dynamic players and a very dangerous landscape for gameplay. There is no nowhere to hide.