If Issa’s sleepover with her girls felt oddly familiar on Sunday’s Insecure, it is no coincidence, says executive producer Amy Aniobi.

She directed Episode 7 — check out our full recap here — and intentionally carved out a moment or two for Issa, Molly, Kelli and Tiffany to give a reverential nod to Waiting to Exhale, the Black-girl buddy movie that celebrated the friendships of four close-knit but very different career women.

“When they dance on the balcony, it’s an homage,” Aniobi happily reveals to TVLine. “It’s a modern and young-girl version, as is the entire sleepover montage. When I was directing, I thought, ‘Where have we seen four Black women hanging out like this before in pop culture?’ And immediately, I thought of Waiting to Exhale.”

But because Aniobi is also one of the show’s scribes, she wanted to make sure the writers’ room was cool with her vision. 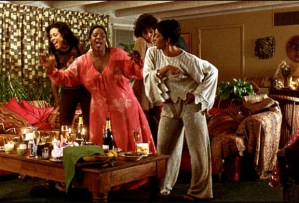 “It wasn’t originally in the script that way,” Aniobi shares. “So I talked to the writers to make sure they were OK with me adding a little bit of a montage. They were down, and so were the actresses, so that’s what we did. And it felt good to be able to celebrate Black women friendships in a way that was familiar, beautiful and relatable.”

The relatability didn’t stop with that dance scene. Aniobi also wanted the characters to get real with one another and ask tough questions during their truth-revealing hat game. That’s why it was important, she adds, to have Tiffany tell Issa, “It doesn’t have to be the smart choice to be the right choice” in regards to Lawrence.

“In the writers’ room, we really talk and take into consideration the history of these characters when we write these scenes,” Aniobi says. “If you remember, in Seasons 1 and 2, Tiffany took Lawrence’s side, and Derek took Issa’s side. It only makes sense, then, that Tiffany would be the one friend of Issa’s who would make that observation. Tiffany’s also married, and the others aren’t, so she knows relationships are hard work no matter what, because being an adult is hard work.” 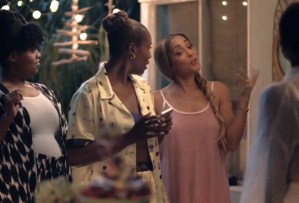 When talking about regrets, it was equally crucial that Issa not mention cheating on Lawrence as something she wished she hadn’t done.

“Issa didn’t cheat just to cheat,” Aniobi emphasizes. “She said she wished she had figured out sooner what she wanted to do professionally because for Issa, it’s all connected. In other words, if she’d been more secure in her life and her career, she might not have cheated. Just like Lawrence could say if he’d been more secure in his life and his career, he would’ve been a better boyfriend and Issa wouldn’t have cheated — and they would both be right.”

What did you think of Episode 7’s tribute to Waiting to Exhale? Drop your thoughts in the comments.