This week’s Insecure took a much-needed break from all the boyfriend drama and focused on the show’s strongest element: Black female friendship.

The squad gathered for a long-overdue girls night, which was supposed to include a bougie hot stone massage. However, their spa date was a no-go after a pipe burst, and the girls decided to kick it at Issa’s instead.

There was smoking, drinking and some singing and dancing to throwback jams like Diddy and Keyshia Cole’s “Last Night.” Issa then suggested they play a game of “Questions in a Hat,” which Kelly warned would dig up more drama.

During the game, Molly admitted she has never seen Love Jones (girl, really?), and Issa revealed that things have been weird between her and Nathan ever since she told him she loved him and he left her hanging.

The attention shifted to Molly, who looked suspiciously happy taking a work call from Taurean. Things have been different since the retreat, and he’s been finding ways to check in on her, so clearly there’s a connection. And just when Molly contemplated giving him the green light to take the next step, John Legend’s “Green Light” turned up on the radio. That’s a sign, right? 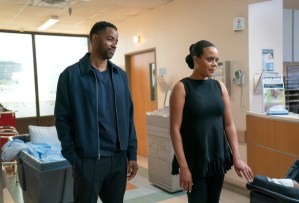 Elsewhere, Condola and Lawrence continued to bond over feeding their son Elijah. She even called him a good father, signaling that things were much better between them since he moved back to Los Angeles. Condola even revealed that she considered having an abortion when she was pregnant, and Lawrence didn’t blame her because he was so terrible to her. In a stark contrast to their last fight, the co-parents wished for each other to be happy.

As the girls got ready for dinner, they realized it’s been three months since their last hangout and vowed never to let that much time pass ever again. Molly, who’s still reeling from her mother’s stroke, felt sentimental and told her friends she loved them — prompting a group hug and Tiffany to break the news that she might be moving to Denver. When Tiffany expressed worry over missing her friends, they were quick to assure her that they’d make it work.

Brushing off their dinner reservation, the girls slipped into their pajamas and carried on. Molly worked up the courage to text Taurean but received a call from her ex Dro instead and let it ring. Feeling inspired (and also really high), Issa tried calling Lawrence before Molly stopped her. It’s a good thing she had her girl looking out for her because that would have been high-key messy.

The next morning, Nathan hit up Issa to talk. He opened up to her emotionally, telling her he does love her but was in his head about it. Issa apologized for pressuring him, but Nathan stopped her, admitting he was being childish. It’s refreshing to see both be so forthcoming about their feelings, which hasn’t been easy. Their conversation ended with “I love you” and a moment of relief for Issa because things were finally going well for them…

But then Lawrence called her back. She may not have picked up, but they will have to talk at some point.

Check out our chat with EP Amy Aniobi about tonight’s Waiting to Exhale homage, and drop your thoughts on the episode in a comment below.