Who’s in the mood for a little raspberry swirl cheesecake?

At the end of Sunday’s Power Book II: Ghost, Mary J. Blige‘s Monet was summoned to Junior’s, a Brooklyn cheesecake emporium she used to frequent with an old flame. And that old flame — and fellow lover of the aforementioned cheesecake flavor — turned out to be Mecca, the seriously scary baddie introduced in the Season 2 premiere.

Though earlier in the episode we watched Mecca break a man’s hand, finger by finger, the villain seemed like a lovestruck teen all over again the moment he entered Monet’s orbit. So what kind of hold does the queenpin have over this guy, we wondered? “Mecca is just head over heels over Nene — that’s what he calls her,” Blige tells TVLine. “Like, that’s his girl. He gets sloppy when it comes to her.”

Showrunner Courtney Kemp fleshes it out for us a little. “Let’s just say they had a relationship when they were teenagers, and he went off and now has become an international man of mystery, and has come back into her life at a really inopportune moment — which is when these people show up,” she says, laughing. “It’s never a good time!” 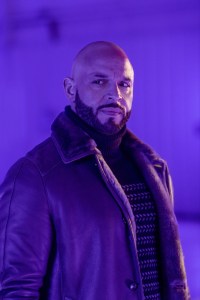 “Inopportune” here could have several interpretations. Monet’s business is in trouble. She’s on the outs with her impulsive, violent son Cane, who’s got a new business connection to Mecca (unbeknownst to his mom). She’s slowly losing control of her kids and her nephew, and the murders at Stansfield University could draw unwanted police attention to her drug operation. Oh, and her husband, Lorenzo, is still behind bars.

Daniel Sunjata, who plays Mecca, is coy when asked how aware Mecca is of Monet’s very intimidating hubby. “Moderately aware,” he says cagily. “That’s all I can say.”

So will Monet somehow spin Mecca’s undying affection to her advantage? Or is there a possibility she could (re)catch real feelings for her ex? “He’s in love with Monet,” is all Blige will say. “Monet is like, ‘I remember. I like you still.’ But he’s in love with Monet.”

What did you think about this week’s episode? Hit the comments with your thoughts!