Leonard Robinson has a warm and inviting smile, but that’s something fans of Insecure haven’t been able to see, because his character Taurean is always scowling.

This changed during Sunday night’s installment of the HBO comedy after Taurean finally warmed up to Molly (Yvonne Orji) during a work retreat. Molly, who woke up with a slight hangover and worries that she’d slept with her coworker, learned they hadn’t gotten that intimate, but she did have to give back Taurean his watch.

And just like that, Taurean and Molly set aside their lawyerly pretenses and became two people who wanted to get closer. So close, in fact, that when Taurean dropped off a retreat swagbag for her, Molly greeted him with a huge hug because she’d gotten good news that her mom was awake, alert and going home soon. 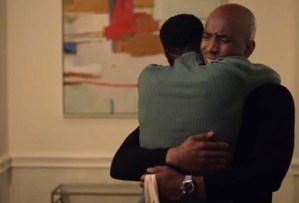 The hug lasted a little too long and Taurean and Molly almost kissed… almost. (Read a full recap.) Insecure fans who have been ‘shipping Molly and Taurean from the first time he iced her during a staff meeting should hold tight, because Robinson says the sparks will keep flying as Season 5 continues.

“I was a little surprised to see Taurean and Molly become something more,” Robinson divulges to TVLine. “Fans on Black Twitter called this seasons ago, because they picked up on the tension and connection early on. But it makes sense, I guess, because they both are good at what they do, and they spend so much time together at work. It was only a matter of time. Fans will see what twists and turns happen next in Episodes 7 and 8.”

Robinson says Taurean and Molly’s developing non-work relationship also gives him more to do and say, and allows him to tap into other sides of his character.

“Don’t get me wrong, I was having fun playing the office antagonist,” Robinson shares with a laugh. “But I joked with the writers and producers that this is the most viewers will have seen Taurean smile. I spend a lot of time at the dentist. I want people to see my nice teeth. As an actor, I had to ask myself, ‘How does Taurean smile? Does he even allow himself to smile?'” 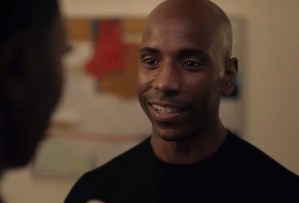 Taurean does, indeed, smile. And he even has jokes. After their hug, Molly and Taurean fell all over themselves looking for things to say and made small talk about the company mug in the bag. This allowed Robinson, a stand-up comedian, to have a little fun and improvise his responses.

“When Taurean says, ‘My mom had a mug,’ that was all me,” Robinson reveals. “It was so awkward and funny. I was channeling my inner Issa.”

What do you think about Taurean and Molly becoming more on Insecure? Do you think they make a good fit? Drop your thoughts in the comments.