With the current new class (not to be confused with that New Class) already in junior year, spending a season — or even half a season — at the beach club would be one way to slow things down, should Peacock decide to renew the revival for Season 3 and beyond.

“From when I first pitched the show, it was always on my mind,” executive producer Tracey Wigfield tells TVLine when asked about a potential return to Malibu Sands. “I think we’ve done a good job of, when we have OG cast or guest stars from the original, using them in a meaningful way and not just having them come back and say a line. And I’ve seen in press that Leah Remini has said that she wants to do the show, which would be a dream of mine. So I would love to have her… do an arc where, obviously, she owns Malibu Sands now, she took it over as Mr. Carosi’s daughter.” 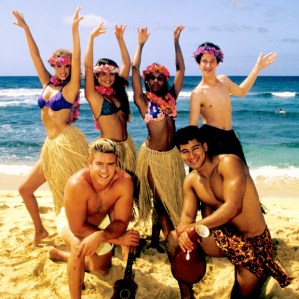 As far as revisiting other OG SBTB storylines, Wigfield says she’d love for the revival to hit the Aloha State, à la Saved by the Bell: Hawaiian Style. “Like they did on the old show, maybe we just go there for one day and film exteriors,” she says. “Everything else is just, you know, in Santa Monica, but we ignore the pier in the background.”

Remini recently reunited with Gosselaar on the Saved by the Bell rewatch podcast Zack to the Future to discuss her sixth and final appearance on the original series — Season 3, Episode 12: “The Last Weekend.”

Gosselaar also chimed in on Zack and Stacey’s summer romance.

“There is an undeniable chemistry between you and I that we have seen,” Gosselaar told Remini, referring to his recent rewatch of the entire Malibu Sands arc. “Tiffani [Thiessen] and I never had a kiss like we have on these six episodes. There is not a single person that Zack comes into contact with, in my opinion, that had a chemistry [like] you and I had.”

Would you like to see Remini return to the Saved by the Bell franchise for a potential third season of the Peacock revival?