Fans who missed the Issa-and-Molly bond on HBO’s Insecure are in luck in Season 5, because the besties are back in full effect.

On Sunday’s installment, Molly reassured Issa about her work woes and helped keep her BFF calm verbally and via texts so Issa could step to Nathan with confidence. This included Molly straight-up asking Nathan’s fellow barber Resha if she and Nathan were sexually involved — on Issa’s behalf, of course.

“I absolutely love that Molly and Issa are best friends again,” Yvonne Orji, who stars as Molly, enthusiastically tells TVLine. “Season 4 was hard. We were apart most of that season, and when we did have scenes together, we were fighting. I didn’t like that. And now we’re back after bonding over the trauma of being robbed by Cheyenne, a woman we thought was our friend. This is who these two friends are. They bond over crazy situations.”

Issa and Molly’s support of one another in Episode 4 further solidifies their closeness, Orji says.

“We got to see them fall into their regular groove,” Orji observes. “Molly gave Issa the encouragement that she needed, and Issa did the same for Molly when she pursued [Nathan’s friend] Aric. It’s good to see them on good terms again, and it shows that, at times, friendships get fractured. Friendships are like bones. It was a fracture, not a break. You have to work at it, and when you do, the friendship heals and reforms, and sometimes improves.” 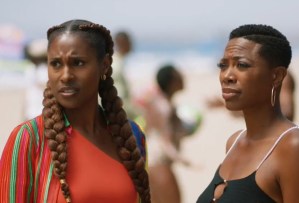 Like all relationships, Issa and Molly also had to survive the gaze of outsiders as well. In this instance, it wasn’t their friends and acquaintances on Insecure that kept the confusion going. It was angry fans on Twitter. Luckily, many of those same fans appear to be back in the Molly hive again.

Orji expects the support for her character to grow because Molly and Issa’s friendship will continue to grow as the comedy comes to a close for its fifth and final season.

“That’s why I don’t give Black Twitter too much oxygen,” Orji admits. “Our fans are so vocal. Molly gave you three seasons of good friendship and she had one off season, and people hated her. Now we’re four episodes into this season, and fans love her again and ‘love to see her growth.’ You guys! This is how people’s evolutions go. You shouldn’t judge the process too soon. Wait until her full manifestation. If you beat Molly while she’s down, how is she supposed to rise?”

Are you happy that Issa and Molly are besties again on Insecure? Or are you still mad at Molly? Drop your thoughts in the comments.