Issa is the queen of maladroit encounters and on Sunday night’s installment of Insecure, she wasted no time making things awkward.

When Nathan thanked Issa and her friends, Molly and Kelli, for coming to his barbershop’s beach party, she responded, “Yeah, great and you?” Issa then talked about the weather, and after Nathan walked away to handle his hosting duties, she ran to Molly and Kelli to confirm that her potential boo was indeed mad at her for crying in his mouth.

Kelli said that Issa was the one behaving clumsily and handed her an alcoholic beverage to loosen up on the beloved HBO comedy. Issa thanked Kelli for the assist but then felt left out when Molly and Kelli sashayed off to play Spades because Issa doesn’t know how. (Thanks for making those of us who are Spades deficient feel seen, Sis!)

Without a handful of cards to distract her, Issa had too much time to monitor Nathan’s movements and grew jealous when she saw him helping his bikini-clad coworker Resha with her sandals. Issa immediately suspected the two had been sexually intimate and got up to focus on anything other than them. 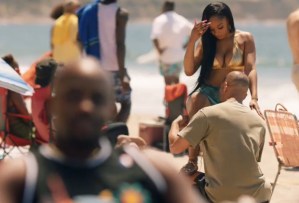 But Resha likes Issa and called her over to make small talk. Issa zoned in on Resha’s cleavage and felt inadequate while Nathan smiled admiringly. Resha ran off to jump in the ocean and Issa asked Nathan if the two of them were still friends. He reluctantly said yes, but before they could talk, Nathan’s rather tardy fellow barber, Shug, arrived with a stack of pizzas before an earthquake knocked them from his hands.

Beach officials declared the beach unsafe because of a potential tsunami, and Nathan relocated his party to a nearby cantina. On the drive over, Issa texted Molly from the front seat that she thought Resha and Nathan were sleeping together. But Molly refused to let Issa wallow in her fears and flat out asked Resha what was up between her and Nathan — like only a real friend could.

Resha said Nathan was more like a brother to her and Issa felt relieved. As if Issa didn’t have enough on her mind, she had to contend with a conspiracy-theory Lyft driver and social media trolling from her former client Crenshawn. Issa decided to set her sights on Nathan, however, and after downing a shot, she worked up the courage to ask Nathan why he bounced in response to her tears. 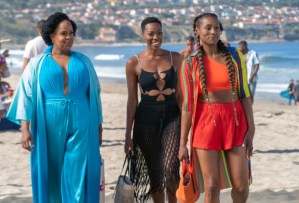 Issa said she expected him to be there when she woke up and Nathan said he didn’t know they were in the “expectation phase” of their relationship. Ouch. Before they could dig deeper, the two were once again interrupted, this time by Nathan’s cousin Thomas and his wife Velma. Turns out Nathan used to live with the couple and their kids until they kicked him out.

Nathan thought it was Velma who ghosted him, but later that night while trying to get into singer Jason Derulo’s house party, Thomas revealed that he was the one to oust him because his erratic actions felt unsafe for their children. Thomas didn’t stick around for the party and after he left, Nathan walked away to process what Thomas told him. Issa followed behind, and Nathan explained that when he was living with Thomas and Velma, he was manic but undiagnosed. 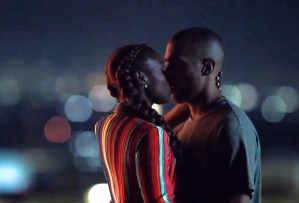 He also said he no longer cared what people thought about him and that included Issa. But she said she cared for him and cried because 2020 was a rough year for her. Issa also said that she liked Nathan and wanted to be more than friends and Nathan said he wanted the same thing.

The two kissed under a starry sky just as the earthquake’s aftershock shook things up and reminded the lovebirds they’ve never really been in control.

What did you think of Insecure Episode 4 titled “Faulty, Okay?!”? And do you like Issa with Nathan? Drop your thoughts in the comments.