Fans of Insecure know more about Molly’s parents and siblings than the families of any other character on the popular HBO sitcom. It’s a familiarity that will matter as Season 5 progresses, says L. Scott Caldwell, who has played Molly’s mom Carol for four seasons.

For instance, in Sunday’s Episode 2, Molly (Yvonne Orji) scolded her parents for not meeting with an estate planner. By the installment’s end, however, Molly called her mother and apologized for being so stern.

CeeCee said she knew her only daughter wanted what was best for them and promised to get their affairs in order as soon as possible. Ever the Cupid, Molly’s mom also used the moment to try to once again convince Molly to date the organist from her church. Hilariously, it didn’t work.

“The relationship between Molly and her mom is very important,” Caldwell tells TVLine. “They have a shorthand, like most mother-daughter relationships do. Molly’s mom and dad represent stability in her life. She’s a bit dysfunctional in her ability to figure things out and find someone. But when Molly called to apologize to her mom, that showed that she’s finally stepping into herself. It’s taken her five seasons to get to that place in a legitimate way, but she has.” 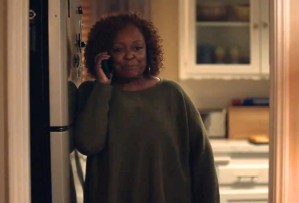 While Caldwell couldn’t divulge much more, she did say that the love of Molly’s family will become even more important as Insecure‘s final season comes to a close.

“The writers have been able to create such a loving family in the Carters,” Caldwell adds about her small-screen brood. This includes patriarch David (Gregg Daniel) and brothers Curtis (Richard Nevels) and Jerome (Malcolm David Kelley). In Season 2, Molly learned that her father cheated on her mother and her mom forgave him. Molly wasn’t able to truly forgive her father until Season 4.

“They are a realistic and relatable family,” Caldwell adds. “And Molly’s closeness to her brothers, like the way they call each other ‘big head,’ is so special. You can see the love.”

The Carters are a stark contrast to Caldwell’s other TV family, the Duponts, on Fox’s sudser Our Kind of People. (The drama will return from its hiatus Tuesday, Nov. 9 at 9/8c.) Caldwell costars as Olivia Dupont, a cutthroat business woman who will stop at nothing to keep her family’s posh social status in Martha’s Vineyard intact. The All Rise and A Million Little Things vet says she read the 1999 book that inspired the series, and didn’t think she’d make the cut. 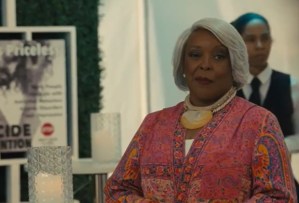 “If anybody invites me to be a part of Black storytelling, it’s my responsibility to make myself available,” the Chicago native shares. “But I remembered the book and noticed right away that the producers were skirting the colorism in it. Because, as you can see, I wouldn’t pass anybody’s brown paper bag test.”

Caldwell says she’s pleased that Our Kind of People pushed past the colorism that exists and that Insecure has, too.

“I come from the stage world,” says Caldwell, who won a Tony Award in 1988 for her performance in Joe Turner’s Come & Gone. “I didn’t think I would be in front of the camera because growing up, I didn’t see anybody who looked like me. Now look at Issa Rae, Yvonne Orji, Nadine Ellis and Yaya DaCosta. We’ve come a long way.”

Are you enjoying Insecure Season 5 so far? What about Our Kind of People? Drop your thoughts in the comments.