The greatest love story on Insecure isn’t between Issa and Lawrence — despite the desires of some fans who would love to see them together again.

No, it’s the bond between Issa and her bestie Molly that matters the most, and that’s why their fight and breakup in Season 4 hurt so much. But that’s water under the bridge now, because these two have always lifted each other up — especially when no one else would. This certainly was the case in Sunday night’s installment of the HBO comedy titled “Growth, Okay?”

A year passed since last we saw Issa and Molly working their way back to togetherness in the Season 5 opener, and a number of things changed. Molly has a cool new and natural haircut, and Issa’s business is booming. Molly often slept over at Issa’s place, and Issa went to Molly’s for dinner. The attorney attempted to sing their best friend song… but Issa jokingly let her know she was singing it wrong.

On the professional front, Molly got along with Taurean (for the most part) while Issa took on a new client named Shawn aka Crenshawn (Queen Sugar‘s Kofi Siriboe). He’s a designer, artist and reformed prisoner who needed the burgeoning event planner’s help securing a sponsor for his upcoming fashion show. 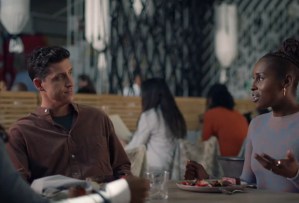 Issa did just that with a company called Nothing But Water (or NBW), which is owned by Nadia, a fellow Stanford University grad Issa met while speaking on a panel at her 10-year college reunion. Nadia trusted Issa’s faith in Crenshawn but her head of sponsorships (a corporate cutout named Seth) didn’t, and his initial reaction was to not sponsor Crenshawn’s show. Per Molly’s sage advice, Issa turned to Nadia for help to solidify the company’s support despite Seth’s reticence.

At first, Seth felt betrayed that Issa went above his head, but she turned on the charm and got him on board. There was just one problem: Seth had corporate-friendly suggestions for Crenshawn, who immediately hated every last note and request. Issa assured Crenshawn that she not only had his back, but corporate compromise is a part of the game. She also reminded her client that she’d been courting NBW for six months before they said yes. 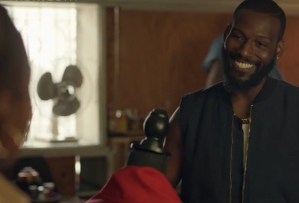 Crenshawn said that he understood what Issa meant, but on the day of the show he doubled down on the number of low-rider bikers and drummers in the production, even though NBW asked him to remove them. Issa tried reasoning with the up-and-coming creative but he wouldn’t budge, and during the show several of Crenshawn’s performers aggressively approached Seth and made him feel uneasy. Thankfully for Issa, Molly was there to serve as her sounding board, just as Issa had been when Molly’s mom tried playing Cupid earlier in the episode.

Issa read Seth’s discomfort as a sign she was about to lose her company and her clout, but after the show, Seth said the experience opened his eyes and made him appreciate Issa and Crenshawn’s radical visions all the more. Crenshawn gave Issa the stank eye, but the pleasantly surprised entrepreneur (entrepre-noir?) shrugged off his ‘tude and went home to deconstruct her day and celebrate with Nathan.

Things went so well on that front that Issa asked Nathan to stay over, and they even kissed. And then Issa, who was clearly still mourning the loss of her romance with Lawrence, started crying so uncontrollably that some of her tears got in Nathan’s mouth. She fell asleep soon after and when she woke up, Nathan had snuck out.

What did you think of Molly and Issa’s heartwarming reconciliation on this week’s Insecure? And was Nathan wrong for leaving without saying goodbye? Drop your thoughts in the comments.