Kendall and Shiv both tried to embrace new roles this week on Succession — but neither venture really turned out how they thought it would.

After Kendall mocks Waystar and new CEO Gerri to a reporter, Logan is seething: “That rat steps one foot inside this building, I’ll punch him in the f–king nose.” Shiv suggests a town hall meeting to get Waystar employees up to speed (and to christen her new role as president), but Logan responds with a jerk-off motion. When the feds try to serve him a subpoena, he tells them to “f—k off,” but Gerri warns him he really should cooperate, or things could get worse. He doesn’t budge, though. “F—k off” it is. Tom sticks Greg into a crappy new office as punishment for siding with Ken, and Roman reluctantly agrees to an interview of his own in an effort to soften Logan’s image. (This is the guy who says “F—k off” all the time, right?)

Kendall and Naomi get dressed up for a big event, and he yells “F—k the patriarchy” (?) to the reporters gathered outside. Inside, he finds Shiv, and she warns him to cool it with the interviews, since the Roys still need to maintain control of the company at the next shareholders’ meeting. She insists she’s advocating for change from the inside, but he doesn’t buy it: “I’m sorry for you, Siobhan.” He goes home and parties it up with Greg, who thinks the $40,000 (!) watch Kendall gave him was a gift — but no, Kendall was just “hooking him up” with the sales guy. (Better check your credit card limit, Greg.) Kendall also invites people to watch a very Ziwe-esque late-night host named Sophie (played by Ziwe!) making fun of him in her monologue. Everyone else is cringing, but he loves it: “This is being in the conversation.” In fact, he wants to go on her show and take some jabs in person. 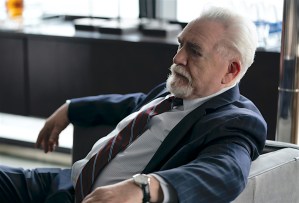 Shiv reports back to Logan, who wants to know why Shiv won’t make a public statement backing him. He blames the whole mess on “a few bad apples” and assures her, “You will not find a piece of paper that makes you ashamed of me.” When she gets home, Tom is drunk and fretting about going to prison. He has “a dumb idea”: go to Logan and “offer myself up as the beating post.” She tells him he can’t do that… but it kind of sounds like she wants him to? The next day, Tom tells Logan, “I’ll step up and go down… I won’t wriggle.” Logan thinks it won’t come to that, but he seems genuinely touched by the offer. Hmmm, maybe being a corporate martyr is Tom’s best move after all.

Kendall has made up his mind: He’s going into the Waystar office. While Shiv and Roman prepare for the town hall meeting by vetting employee questions — “Can we get less question-y questions?” Roman asks — Kendall tries to enter the building and gets hassled by security. He finally takes the freight elevator up and has an awkward run-in with Tom, telling him, “Another life is possible, brother.” At the town hall meeting, Shiv is introduced as the new domestic president, and she tells employees they’re taking the allegations seriously — when she’s interrupted by Nirvana’s “Rape Me” playing loudly over a set of speakers. The crowd murmurs as security rushes to shut the music off, but it’s too late: Shiv’s big moment is spoiled. She angrily retreats back to her office and… spits in her day planner? OK, then. 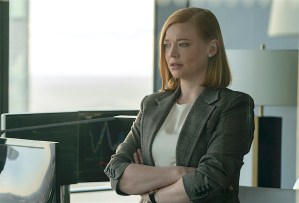 She gets her revenge by drafting a letter of support for Logan that trashes Kendall as a drug addict and an absentee father. (Roman calls it “a greeting card from hell.”) She sends it out wide just as Kendall is getting ready to appear on Sophie’s late-night show and bothering the writers with joke pitches. He laughs off the letter at first, but then wants to ask the writers to not mention it, since it’s private. (But “it’s not private” anymore, as Jess points out.) Kendall tells a producer he might have to bow out of the show, even though it tapes in 15 minutes, and we follow him as he walks down the hall and his smile fades into a frown. He holes up in an empty equipment room and sits down alone on the floor, curling up into a ball and listening as Sophie razzes him for not showing up and reads the letter aloud to her audience.

All is not lost, though: The FBI shows up at Waystar’s offices with a search warrant, and as Gerri tells Logan, “these are the ones who don’t f—k off.” The old man eventually relents and agrees to cooperate, and Tom’s upbeat boardroom meeting is interrupted by the news that federal agents are raiding the building. (Ha!) Shiv watches the raid on the news, and Kendall follows the chaos on his phone from backstage at Sophie’s show. Just when it was looking dark, Team Kendall gets a much-needed victory.

Got thoughts on tonight’s Succession? Drop ’em in the comments. Plus, click here to get Jeremy Strong’s thoughts on Kendall’s breakdown.