Warning: This post contains spoilers from Season 3, Episode 3 of Succession.

By the end of this week’s Succession, Kendall Roy had hit rock bottom, emotionally — but the actor who portrays him wasn’t sure at first that he belonged there.

Sunday’s episode ended with Kendall crumpling up in a ball on the floor of a TV studio’s equipment closet after his sister Shiv sent out a letter supporting her father Logan and labeling Kendall a drug addict and deadbeat dad. (Read our full recap here.) It was a mortal wound to Kendall’s swaggering bravado, but Jeremy Strong, who plays Kendall, tells TVLine he initially had misgivings about the scene.

“It’s interesting: I didn’t think it would hit me hard,” he remembers. “And I had some exchanges with [series creator] Jesse [Armstrong] about that. I said, ‘None of this is new. They’ve all said this s–t about me before. I expect this. They’re playing dirty. Why would this be devastating to me? I don’t agree. And I think what she says needs to be more personal and more specific. I have strong feelings about it.'” 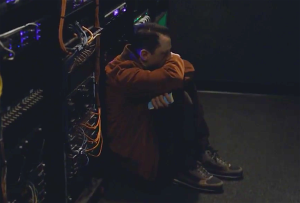 Armstrong responded “in his magnanimous way,” Strong recalls, and “said, ‘I hear you, and I acknowledge that you feel this way, but see what happens,’ basically. And I found myself, while we were shooting it, despite knowing that in a way we come from a family of muckrakers and mudslingers, and my father have accused me of worse things, my brother has accused me of worse things, there was still something that just was so incredibly hurtful.”

As Strong points out, “you’re still a kid when you’re with your siblings. So there’s a little boy in Kendall that I find I keep being brought back to, in a way. There’s just a primal hurt there. When I was in that engine room with those TV screens on the ground, I felt incredibly sad and incredibly alone. And I also felt how necessary it was to keep things up, because I was on the precipice of not wanting this to go on anymore.”

Drop your thoughts on this week’s Succession, and Strong’s performance as Kendall, in a comment below.