Succession‘s Roy siblings attempted to hash out their differences in a child’s bedroom this week — which was quite an appropriate setting, actually.

While Logan scrambles to keep his other children in line (“No one talks to the snake,” he growls to Roman), Kendall wants Greg to bring his grandfather Ewan over to their side. Greg’s getting a little antsy, though: “I’m kinda too young to be in Congress so much.” Then Tom calls him and needles him for information, adding a colorful threat: “Logan is gonna fire a million poisonous spiders down your dickie. You better find an animal’s corpse to crawl into and hide.” Plus, Stewy taunts Kendall by having a Trojan horse sent to his apartment. (Be sure to look inside that thing before you bring it in, Ken.)

Shiv arrives at Kendall’s for a secret meeting, but she warns him: “I’m not here to cozy up.” She didn’t like his press conference stunt, she says: “You f–ked the family.” (“Or I saved the family,” he replies.) She wants to see the papers he has that incriminate Logan, but Kendall won’t share them until she commits to backing him. Roman shows up, too, but Kendall quietly assures her: “You’re the one I want, Shiv.” Meanwhile, Logan fumes that he can’t get a hold of his wife Marcia, and he butters up Connor, apologizing for being so harsh to him on the yacht: “You’re number one, kiddo. You know that.” (Well, for the length of this conversation, anyway.) 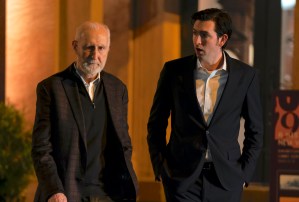 Alas, poor Greg is overwhelmed by all this corporate wrangling. When a Waystar attorney shows up at his door, Greg turns to a law school friend of his: “He’s saying he is my lawyer. Do you think he’s probably my lawyer?” He asks Ewan for help, and though the old man wasn’t impressed by his congressional testimony, he offers to set him up with his own lawyer. (Hi, Peter Riegert!) Speaking of lawyers, Lisa Arthur wants to see these papers of Kendall’s, too, but he’s busy trying to get Shiv and Roman on his side. As for Shiv, she calls out Tom for saying “thank you” when she says “I love you,” and he finally caves and says it back. (“It’s good to know we don’t have an unbalanced love portfolio,” he mutters.) Oh, and when she tries to peek inside an envelope of Kendall’s, she just finds a piece of paper that says “F—K YOU.” Well played.

Ken makes his pitch to Shiv and Roman, telling them their dad is “over,” so “let’s work together to take over and help him move on out.” Roman’s just there to spy for Logan, though, and Shiv’s just there to talk Ken out of it. (Roman does one hell of a Kendall impression, too.) They move to Kendall’s daughter’s bedroom, and Connor joins them, making it a full house of Roys. Ken wants the four of them to appear together as a united front to battle Logan and the “foundational sickness” at Waystar. (“Unsubscribe,” Shiv sniffs.) Kendall gives them a longwinded, manic speech about how Waystar could “leapfrog tech” and become a new media behemoth, but Roman blows him off. When Roman defends Gerri’s promotion to CEO, though, Shiv fires back: “You can’t hide under the covers with Mommy… you love showing your pee-pee to everyone, but sooner or later, you’re gonna have to f–k something.” Roman calls her a “bitch” and storms off. (“It’s not my fault he has a sex thing,” she says.)

Marcia finally arrives in Sarajevo to see Logan, but she’s still hurt by his infidelity… and wants compensation for it. (Her rep tells Karolina she’s looking for “very, very large numbers,” but hey, it’s cheaper than divorce.) Back at the bedroom summit, Kendall pushes the others to wash their hands of Dad’s sins, but Shiv insists she never knew about them in the first place. Ken ducks out to consult with Stewy, who introduces him to Sandy Furness’ daughter Sandi (yes, that is confusing), played by Hope Davis. Kendall assures them he “can kill” Logan (figuratively, we hope) and avoid a shareholder squabble. Meanwhile, Roman still thinks Logan is invincible — “He’s like Moby Dick. He could take us all out with his back riddled with harpoons” — but he and Shiv seem to actually be contemplating turning against their dad. They have trouble figuring out who’d be in charge, though: Kendall volunteers himself as CEO, while Shiv says, “If I were to back you against Dad, I would need to take over.” Ken’s response is cold: She doesn’t have the experience, and the market doesn’t like her. OK, then. 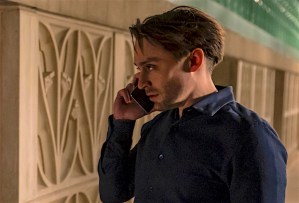 Roman calls Gerri, who says if they all turn against Logan, “honestly, I think that zaps your dad.” She doesn’t think any of his kids can take over as CEO, though, which Roman doesn’t want to hear, and Shiv allows herself to dream of taking over the big chair in a call with Tom. But when they return, they see Logan has sent them a box of donuts with a card telling them to have “a nice tea party.” Yep, he knows. That seems to tip the scales: One by one, Kendall’s siblings tell him they’re staying with Logan, and he berates them all as cowards and idiots as they walk out. From the car, Roman calls Logan to tell him he and Shiv are both solidly with him, and a triumphant Logan decides to return to New York. He informs Shiv he’s making her president, and though she laughs off the new title as a glorified “mascot,” she’s clearly honored. And at a meeting with Lisa Arthur, Kendall wears a baseball cap low over his eyes, looking defeated.