It’s Roy versus Roy as Succession returns for Season 3 — but who’s got the early upper hand: father or son?

Sunday’s premiere picks up right after Kendall’s bombshell press conference: He seems shaken by the magnitude of what he just did and takes refuge in an empty bathtub, while Logan flies into a rage and demands to know, “What’s the play?” Kendall finally emerges and declares: “Action stations! Let’s f–king go. Let’s get into this.” He dodges reporters on his way out, and in the car, when Karolina seems iffy on his crusade, he kicks her out: “I can’t have weevils in the f–king flour sack.” Meanwhile, Shiv tells Roman they need to back their dad… but she’s really wondering, “Is he toast?” 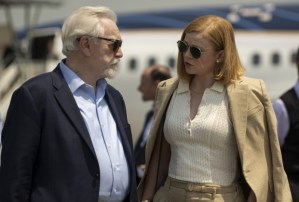 While Kendall looks for a lawyer and directs Greg to “take my cultural temperature” (yeah, Greg doesn’t know what that means, either), he gets a call from Logan, which Jess answers for him. Logan offers his son a deal if he’ll retract his statement, and Kendall flatly declines, which sets Logan off: “I’m gonna grind up his f–king bones to make my bread.” (Kendall replies that he’ll “run up off your f–king beanstalk.”) Logan hangs up and calls his own “action stations” — like father, like son, huh? — and Gerri suggests they make a plan to cooperate with the government investigation. Roman says nah: He’d rather deny everything and wait for Kendall to mess things up like he always does. “You destroy Kendall, it falls apart.” When Karl dares to ask for food, Logan shoots him down: “We’re on saliva and adrenaline here.”

Greg is excited that Kendall is trending on Twitter (“ahead of Tater Tots”!), but Kendall is busy trying to build his alliance. His call to Gerri goes straight to voice mail, and Shiv hangs up on him. He and Logan are also going after the same lawyer: Lisa Arthur (Sanaa Lathan), an old friend of Shiv’s. “She loves winning, and she loves money,” Shiv reports. Logan retreats to Sarajevo with Tom, Frank and Karl — just in case they try to extradite him — while Shiv, Roman and Gerri return to New York. Oh, and Logan asks Connor to “hold down the fort,” whatever that means. When Shiv and Tom say goodbye, she says “I love you” and he just says “thank you” (ouch), and when Kendall drops in on his ex-wife Rava and their kids, he gushes that this whole thing “was kind of for you guys.” But when he asks her if he can win this, she’s just not sure. (Double ouch.) 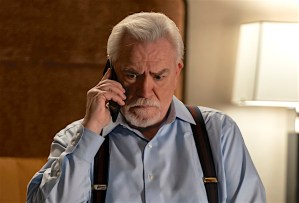 On the plane to Sarajevo, Logan says he’ll step back as CEO just for appearances, but he’ll continue to pull the strings from behind the curtain. Who should take over, though? Logan narrows down the field to Shiv, Roman and Gerri, and Tom runs to the bathroom to call Shiv. She gives him the green light to push her name to Logan, and Roman sees her talking and gets the hint. He calls Logan and volunteers himself for the top job. He wobbles a bit during the pitch, though, and awkwardly suggests he could serve under Gerri for a couple years; after a cordial goodbye, Logan declares: “Roman’s out.” Meanwhile, Kendall is lining up a new PR team, frantically talking over their pitch and offering to write an op-ed or do a quick TEDx talk. Oh, and he wants to hire “the BoJack guys” to start writing his tweets (???). Yeah, Kendall Roy might be going off the deep end.

Shiv meets with Lisa Arthur, and when Lisa says she can’t work with Logan, Shiv would rather talk about “her own position.” She wants to bring Lisa onboard as her personal legal “consigliere,” but when Lisa cautions her to not reveal any confidential information, Shiv can read the tea leaves: Lisa is working with Kendall. “Be careful who you hitch your wagon to, honey,” Shiv warns her. “Because a lot of wagons are going in the ditch.” Her inability to land Lisa seals the deal: Logan calls Gerri and tells her she’s Waystar’s new CEO. Roman congratulates her, insults her and takes credit for it all at the same time. He also calls Shiv to gloat, of course. No, he didn’t get the job… but neither did she.

Kendall has his first meeting with Lisa and her legal team, and he throws down the gauntlet: “My dad’s the devil. He runs a crime ring.” He wants to take down Logan… but without implicating himself or destroying the company, which Lisa points out is a tough needle to thread. But just getting Lisa Arthur on his side is a big victory. As the “Gerri is CEO” news leaks to the press, Kendall calls Logan to taunt him about winning the Lisa race. Logan is furious that he has to settle for his second choice of lawyer: “Let’s beast ’em! We’ll go full f–king beast!” But when he wanders outside into the Sarajevo night, he looks a bit lost, doesn’t he?

Give the Succession premiere a grade in our poll below, and stay tuned to TVLine for in-depth coverage all season long.