The Baby-Sitters Club‘s stealth MVP of Season 2 is Mary Anne Spier, and we will hear no further arguments.

“I mean, I don’t disagree with you,” series creator Rachel Shukert says when TVLine says as much. “Mary Anne is one of my favorite characters to write, honestly, because she’s so observant and so wise — and, in an interesting way, is very true to herself. Mary Anne is not projecting an identity that she’s not. She rarely acts with bravado or says things she doesn’t mean.”

Mary Anne rules so hard that we felt compelled to ask Malia Baker, who plays her, a bunch of questions about defining the character’s relationship with Logan, seeking sisterhood with Dawn, helping Claudia through her grief and serving Kristy some tough truth. Oh, and also about her hair — that glorious hair. Read on for her answers.

TVLINE | It definitely feels like Mary Anne comes into her own a little bit in the second season.
Yeah, for sure. I mean, I remember going in for a meeting with Rachel, and I remember her saying, “Mary Anne is growing into herself even more throughout this season.” … It was just so fun to be able to portray this girl that is going through all the lows of awkward middle schooler, teenage life and is stepping into her own as an individual, but at the end of the day, having fun with her friends.

TVLINE | Let’s talk about Logan first. Honestly, I feel like Mary Anne handles relationship problems better than a lot of adults do.
Yeah, for sure. I feel like Mary Anne is a great life lesson for everyone at every single age, you know? She is coming into her own and figuring out what she wants for herself and not trying to be the people-pleaser that we’ve kind of known her as, and figuring out, like, is this something that she’s really okay with?

And things change while you become actually boyfriend and girlfriend, the labels and everything. It’s not as natural as it was. It’s more awkward. Playing the awkward part of it was super fun for me, because Rian [McCririck] and I, who plays Logan, we just have that kind of chemistry [that] we’re able to add the comedic side to everything. So, it was super fun to play. Yeah, that episode, 110 percent, Mary Anne handles it like a trouper. I would take advice from her any day of the week. [Laughs] 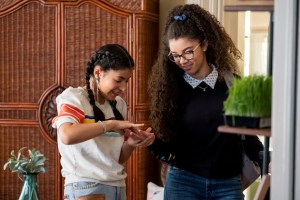 TVLINE | And then with the stuff with Dawn — do you think Mary Anne would have thought it would be this tough to merge their lives?
Mary Anne was really, really hoping for it, even more so than Dawn, I believe. You know, we see that one episode where Mary Anne says, I guess now it’s not our time to become actually sisters, and Dawn says, well, you’re already like a sister to me, and then you see Mary Anne have that kind of reflection of “I want something more.”

She has her dad, but she lost her mom, and she’s looking for that figure. Throughout the second season, she doesn’t find that figure. Instead, she finds herself and her friends and realizes that the holes that she’s been thinking is in her heart is really just setting space for all of the BSC members, and I feel like it’s such a beautiful love story between all of them.

TVLINE | In Episode 7, after Mimi passes, Mary Anne has to give Claudia a little tough love. Tell me about shooting that scene in Mary Anne’s bedroom, where she has to point out that Claudia is doing everything possible to avoid her grief.
Honestly, that scene, throughout the whole second season, was one of my favorite ones to shoot. And it’s because we did not prep for it whatsoever. We had known the lines, and we had memorized them, but not too much that we’re so familiar with them and so well-rehearsed with them. I didn’t practice the scene with Momo[na Tamada, who plays Claudia] or the director before we filmed the first take. It was more like, “OK, we’re just going to go into this.” …The amounts of [fan] edits I’ve gotten with that scene is really remarkable, seeing that people are appreciating it.

TVLINE | It stood out to me because it felt like the Mary Anne of Season 1 might not have been comfortable standing up to one of her friends in that way.
I feel like that’s accurate. With Kristy and Claudia, she would’ve been more comfortable, Kristy more so than Claudia, just because they’d grown up together. They’ve been best friends since they were so young. Their moms knew each other. Their grandparents knew each other. Everyone knew each other, and so it was more like a family… But I definitely agree that she wouldn’t have been comfortable, and I feel as that just really shows the progression and the arc in that character. 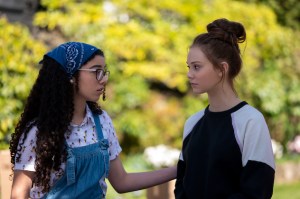 TVLINE | I was touched by how upset it made Mary Anne, in the finale, to point out to Kristy that her biological dad was trash.
I remember doing that scene in a lot of different ways. I asked the director, who was Kimmy [Gatewood] at the time, and she was just saying, “How do you want to play it?” My initial thought to the script was [that] Mary Anne is kind of frustrated with Kristy’s dad. She’s seen this happen before, and so she’s just going to tell her straight up, the plain truth, but then she sees it’s hurting Kristy.

So, then she gets hurt at the thought of even doing that. It’s tough for her to say, but it’s the truth and no one is saying it. Instead, Watson is.

…Filming that scene was really powerful. There were so many cast members in that one, so it was in front of everyone. It felt like we were on a stage, honestly.

TVLINE | Now that we’ve talked about the deeper stuff, a silly question: Mary Anne got to wear her hair out so much this season, and it was glorious. Did you have discussions about how big to make it? How she was going to style it? Give me anything you want to give me about her hair this season.
[Laughs] That’s actually a really good question. I haven’t gotten that one about the second season. I’ve been waiting for someone to touch upon it, because it is so important. I’ve had so many discussions with hair people and the directors and the producers of what Mary Anne should do with her hair in the second season.

…Throughout the second season, I feel like Mary Anne’s hair kind of reflects of how she’s feeling in that moment, you know? Maybe a little bit more flat because she’s super tired, and you know, it’ll be in a low pony because she’s not doing so well, but when she’s like, “OK, I’m happy and having a good time,” it’ll be this fun, curly moment.