The Season 2 finale of The Baby-Sitters Club starts out as a sunny half hour about a revived Stoneybrook tradition — the baby parade! — and ends with a tearjerkingly tender decision for one of the girls and her family.

The success of that plot pivot is due to the series’ admirable blending of heart and humor. And most of the heavy lifting in Episode 8 is left to Mark Feuerstein, who, as Kristy’s well-off stepfather Watson, gives a touching speech about how much he’d like to adopt Kristy and her brothers officially after their biological dad lets them down yet again. (Read a finale recap and post mortem with series creator Rachel Shukert.) 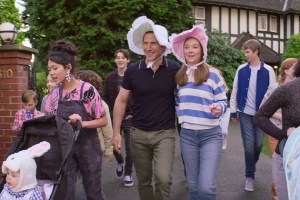 TVLINE | The finale feels like a turning point for Kristy and Watson. Tell me about how you and Sophie Grace prepped for that moment at the end.
So, things on The Babysitters Club can sometimes be a little run-and-gun… On this particular day, there was rain, so we were held up for a little while because of rain. All of that said, Kimmy Gatewood is such a fabulous director. She has a great way of throwing us all into the mix, getting us all on set, and just playing for even only a couple rehearsals. She likes to keep it natural so she gets pretty quickly to the shooting of it. And on this particular day, there was one funny issue that had to do with the bonnet that I’m wearing. I don’t know if it was subconscious or unconscious, but I forgot to put it on, and [the wardrobe [department] forgot to remind me.

So, I got out there and started doing the scene without it, and I think halfway through, I’m like, “Uh oh, I think there was something I was supposed to have on my head.” The wardrobe is calling Netflix, and [series creator] Rachel Shukert is on the phone with [executive producer] Sascha Rothchild who’s on set, and they’re like, “Bonnet! We need the bonnet!” [Laughs] So, you know, I may not have been thrilled for my publicity photos and stills that came from that moment. It was important to Rachel and to Netflix that I have it on, and it was very cute, and I hope it doesn’t undermine the gravity of situation with their father not showing up to the baby parade.

TVLINE | Actually, it read to me as one of those instances where you don’t care how dumb you look as a parent as long as your kid understands how much you love them.
Well, I’m so happy! And the truth is, as a father of a 15 year old, a 14 year old, and a 12 year old now, I have been sworn off of embarrassing them in so many ways: kept off of the field on sporting events, and kept away from the door at drop-offs and pick-ups. Such that I’m in my own social quarantine as an embarrassing dad, which I wear with a badge of pride. [Laughs] So, this show is like my escapist fantasy. I get to embarrass every child, they’re not my children, they’re not even real children! They’re fictional, and I can just go crazy embarrassing the hell out of anyone and everyone. 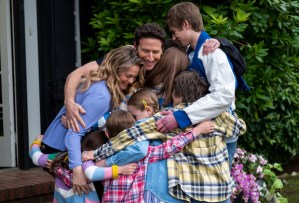 TVLINE | Watson doesn’t have a ton of screen time, but he still feels like a pretty well-developed character.
That’s so nice of you to say, Kim, and I really do feel that way, because there isn’t enough real estate in the scripts to treat it lightly or to take it for granted. Rachel Shukert has done such a great job of using the moments where I show up, and making it count… I love what I got to do at the end of the season because I’m a real family guy, and I can see how challenging it is to deal with this Brady Bunch-like family, where there are kids from both former marriages, and we’ve got to blend this family. The issue of the errant dad who’s not showing up for the baby parade is a tricky one, because I don’t know that any child psychologist would tell you to air your grievances as loudly as I did in front of the children, whose father I’m insulting in their faces. [Laughs] But there’s something to be said for honesty and not keeping anything a secret, because secrets are a thing that will undo a family.

So, what I love about my character is he’s a guy who just says what he thinks, airs it out, and then you know, instead of being someone who just complains and doesn’t find a solution, finds a very heartwarming solution which wraps up the whole season.

TVLINE | It’s also sweet that Watson plays against that TV type of “rich guy who’s emotionally closed off from his family.”
Well, it’s funny you say that, because I don’t know that when they envisioned Watson Brewer, Mark Feuerstein was exactly what they were envisioning. Because literally, there’s a line in the pilot of the series, Episode 1 of Season 1, where I’m walking them through the living room and I say, “Yes, my family inherited this beam from the Mayflower, which of course, my descendants came off of.” For some reason, Kim, they cut that line. I don’t know why. [Laughs]  I can’t, to this day, figure it out. But I will say that I imagine Watson Brewer is a little more touchy-feely in my hands than he might have been in say, some other person’s hands. [Laughs]