If you’ve finished Ted Lasso and are looking for a new show to wrap you in a warm hug, may we suggest Season 2 of The Baby-Sitters Club?

The new episodes, which dropped this week on Netflix, follow a group of middle-school-aged friends who staff the titular business. Kristy, Claudia, Stacey, Mary Anne, Dawn, Jessi and Mallory are smart. They’re loving. They’re funny. They’re savvy. They’re earnest. In short, they’re the kind of kids you’d want watching your kids — and who you’d get a kick out of, chatting with in the car as you drive them home afterward. (Read our premiere recap and finale recap.)

And when TVLine raises the very idea that the Baby-Sitters Club girls are the antithesis of the sullen, catty teens TV likes to depict (see: The White Lotus, Euphoria), BSC creator Rachel Shukert pauses a minute before she answers.

“I mean, it’s tricky, you know?,” she says. “I weirdly feel more like I’m the way I was when I was that age than the way that I was when I was an older teen.” The time in a girl’s life that the series depicts, she continues, is “before someone has shown you this other thing that you’re supposed to be, this other thing that you’re supposed to affect, where you really feel this pressure to do all these things that you’re maybe not emotionally ready for.”

Which is not to say that The Baby-Sitters Club doesn’t deal with the big stuff: death, blended families, illness and the pressures of parental expectations all figure into the eight new, half-hour episodes.

But the executive producer adds that Ann M. Martin’s books (on which the Netflix series is based) provided a strong template, so the show’s creative team had a strong base from which to handle anything that came up. “We really went into the show feeling like we knew these girls. We didn’t have to spend months figuring out what made them tick,” she recalls. “They’re so beautifully drawn. You know how Kristy is going to react to something. You just sort of know what Dawn is going to say.”

Read on for more of Shukert’s thoughts on the new season, starting with how much longer she expects the Baby-Sitters Club to convene. 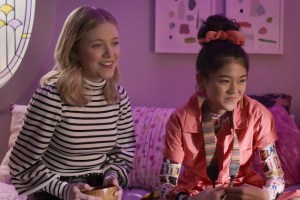 A RACE AGAINST TIME | In between seasons, some members of the show’s young cast had growth spurts, which Shukert jokes is “something we just always kind of had to leave in the hands of a higher power.” She takes a similarly laid-back approach to what those inevitable changes means for the longevity of the series. “It does put a little bit of a timestamp on the show, because I don’t know that we’re going to follow them into college or anything like that,” she says. “These books, for me, I was such a giant Baby-Sitters Club fan as a kid, and they’re the most important thing in your life for two or three years, and then you age out and another generation finds them. So there’s this very specific, jewel-like quality to these books and to this show that exists in this finite period of time, and that’s something that we’re all sort of OK with.”

TROUBLE AHEAD? | Toward the end of Season 2, we got indicators that Stacey’s parents’ marriage might be in trouble — a subject that Shukert says a potential Season 3 would likely explore. “There are children of divorce and children of single parents on the show, obviously, but we haven’t shown what that actually feels like, to go through it in real time,” she explains. She adds that, even though the show has not dealt with COVID head-on, “we’ll try to deal with these kind of things, obliquely, that people are going through. Things like loss and disappointment. I feel like there’s been a lot of kids this year who have seen a lot of marital tension and have palpably feared that their parents would split up,” she says. “It will be interesting to see what that looks like and what reconciliation might look like, what a split might look like. It’s definitely, something to think about.”

Whether or not the show will have Shay Rudolph’s character move back to Manhattan for a while, like Stacey does in the books, is up in the air. “I don’t know,” the EP adds, chuckling. “I don’t want to lose Stacey!” 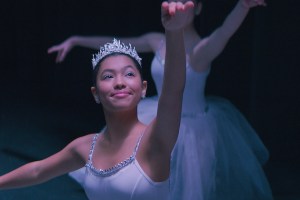 MAY I SEE YOUR REFERENCES? | “Kids can know a tremendous amount of things that are in their area of passion,” Shukert says when we ask about the highly eclectic cultural references the girls have casually dropped over the past two seasons. (Example: Claudia’s invocation of an iconic line from Tony Kushner’s Angels in America.) Hence Jessi’s mentioning of ballet greats, Mary Anne’s frequent Broadway callouts and Dawn’s nods to historic political movements. “There’s a saying in writers’ rooms that you’re either writing about a group where they characters have seen Star Wars or where they’re in Star Wars,” she adds, laughing. “This is definitely a show where the characters have seen. And I see that as something that’s also inspired by the books… The Baby-Sitters Club was the first place I ever heard of Rosemary’s Baby.” So when Claudia brought up American artist Elizabeth Peyton, “I think there was a note that was like, ‘Are kids going to know who Elizabeth Peyton is?,'” Shukert recalls. “And I was like, ‘No, but now they will.’ You’ve never heard of something — until you’ve heard of it.”