The following contains spoilers from the Season 3 finale of HBO Max’s (already-renewed) Titans.

Another Titans season has come to an end, though this time the superhero team-up series left us with zero idea about what’s coming next.

The Season 3 finale saw the Titans divide and conquer, applying their particular sets of skills to save the people of Gotham who had already been killed by Crane’s poison (by creating a purple rain cloud of healing Lazarus Pit waters!) and then busting into Wayne Manor to stop the Big Bad from wreaking further havoc. Once the threat was neutralized, Crane was put back behind bars (and for good measure, “infected” with the cumulative darkness that Rachel had absorbed from the Lazarus Pit). And Jason, despite giving the Titans a big assist in the end, bid Dick adieu, knowing he can never rejoin the team (RIP, Hank).

As for the others: Donna left for Paris to hang with Dawn, Dick said goodbye to Barbara, and Connor kissed Blackfire goodbye after making things right by devising schematics to rebuild her spaceship. The Titans — new recruit Tim Drake included!— then boarded no, not Batman’s PJ, but an RV, planning to drive cross-country back to San Francisco.

Meaning, National Lampoon’s Titans Vacation? “I think they should go to San Diego or L.A., anywhere where there’s waves,” offers series lead Brenton Thwaites. “But that’s just me being selfish!”

Following the aforementioned Crane prison scene, the episode simply ended, whereas previous finales respectively teased Superboy (and Krypto!), and Blackfire’s return and the possible resurrection of Donna Troy. Asked about the lack of any Season 4 teases, Thwaites ventured that “it will depend on the characters they want to use, just because we as a company are exploring what we’re going to do” across DC’s myriad TV and film properties.

“I’m sure that when the time comes, we will tease everything,” he added. “But as far as I know it’ll be shot in Toronto, and probably during the summer — so it’ll be a little less morose and cold-looking!” 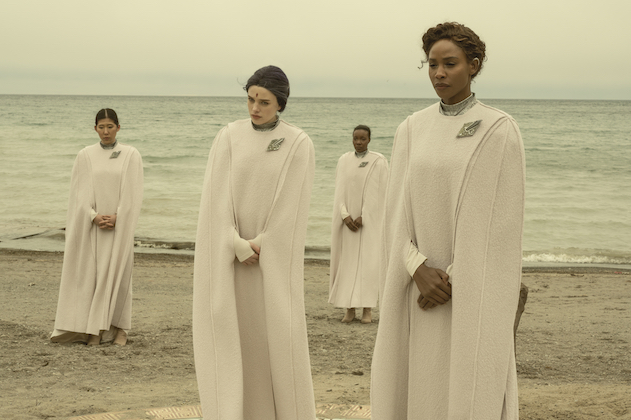 Speaking of frigid scenes, TVLine asked Thwaites about Titans‘ atypically non-idyllic take on Paradise Island, where the characters were clearly bundled up amid howling winds. “I think the original plan there — I think — was to travel to an island, to go to Mexico or somewhere in the Gulf,” he said. “I think COVID kind of got in the way of that and limited us a little,” resulting in Toronto passing for Wonder Woman’s homeland of Themyscira.

“But maybe Season 4!” he added. “In the summer, there’s a lot of options around Toronto.”

Looking back on the season gone by, Thwaites told TVLine that his favorite scene to film was in Episode 4, “when I’m fighting with Red Hood in the woods. Something about that just felt very cinematic. And I really loved how we went for it, and had the two supersuits fighting in the middle of these huge trees.”

As for possibly his least-favorite shoot of Season 3….

“I think it’s in Episode 5 or 6, where Connor and Dick drive out to an industrial area, and Crane sets us up by blowing up a van. Connor then grabs me in super-speed time and throws me, and I land like a cat on my paws.” The catch is “it was minus-23 [degrees Celsius] that day, because we were coming out of the winter. I thought I’d be fine, so I just took a sweater to rehearsal, and we ended up rehearsing the scene for an hour-and-a-half, two hours! I didn’t have a coat, so I just started to shut down and had to leave. I was like, ‘Someone else rehearse on my behalf. I’m going to go back to my trailer!'”