The Titans faced not one but multiple (and sometimes even superfriendly!) threats in the DC Universe series’ Season 2 finale. When all was said and done, who had death struck?

Worried that AWOL Dick has lost his mind (and, worse, is fated to die at Deathstroke’s hand), Donna rounded up Dawn, Rachel and Kory and formed a plan to attack Cadmus Labs. The girls’ night out, however, was derailed by Deathstroke himself, in the middle of an empty street. Some gunshots had been exchanged, and Kory took a hit, when Dick in his new Nightwing persona landed atop the ladies’ car, declaring this was his fight to fight. While Rachel used her ever-evolving powers to heal Kory, Nightwing duked it out with Deathstroke, clashing escrima sticks against sword — all while calling out to Jericho, who’s “inside” his father. Just as Deathstroke declared that Dick would die with his friends, Rose as Ravager showed up, not to join her Dad but to help defeat him on behalf of her new family. As Ravager ran through Deathstroke with her own sword, she cued her brother to jump into her. Dick welcomed back Jericho, who briefly spoke and signed through Rose (while also appreciating his “new digs”).

But as Donna would then alert Dick, their night was far from over….

Having previously whet bidders’ appetites with a small sample of Subject 13’s abilities, Mercy Graves had scheduled a larger showcase for that night, at a carnival where Gar had been unleashed as a tiger. Cadmus vans pulled up and released Conner to slug it out with the beast. But that mano a pata fight was interrupted by the arrival of Dove, Wonder Girl and Starfire — which Mercy saw as more an “opportunity” than a problem for her demonstration. While Rachel found and tried to soothe the tiger into transforming back, Wonder Girl and Superboy traded superhuman blows. (Hank and Kory tried to lend a hand, but for assorted reasons were no match for Superboy.) Mercy’s live feed to the bidders was abruptly cut off (remotely, by a tea-sipping Bruce Wayne), at which point Nightwing joined the fray. 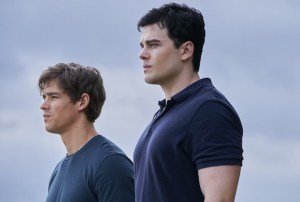 After Rachel coaxed Gar to change back, Dick enlisted her for a plan, in which Wonder Girl lassoed Superboy, while Raven used her powers to “connect” Dick’s mind to Conner’s. Once there, Dick busted through a wall to let in some light, which empowered Conner to break free of Mercy’s thrall and neutralize the Cadmus threat. (For good measure, Kory popped Mercy old-school, “for Lex Luthor.”)

But in the aftermath of the carnival clash, a nearby electric tower had been compromised to the point that it finally tipped over. Clocking the threat and the mother/child directly in its path, Wonder Girl swung into action and caught the plummeting tower — only to be fatally electrocuted for her effort. The next morning, the Titans delivered Donna’s casket to some of her Amazonian sisters at an airstrip. Before they left, Rachel suggested to Dick that because her powers are changing, maybe just maybe she can do something to resurrect their fallen friend — so Dick approves her plan to travel to Themyscira.

Some time later, we see Bruce counsel a distraught Dick that “things inevitably fall apart; the art of life is in how we put them back together.” Reflecting on their past, prior to the recent rockiness, Dick acknowledges that Bruce “gave me the thing that neither of us ever had — family.” Bruce in turn shared one additional nugget of wisdom: “Fight the impulse to turn inward and away from others. Grief is a process best not done alone.” 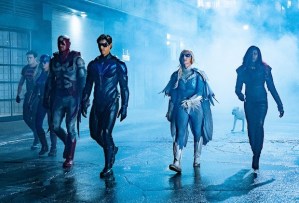 At a Titans dinner, where the gang toastEd Donna’s memory with her favorite orange pop, Kory thanks Bruce for showing up when he did at the Elko Diner — but he has no idea what she is talking about. He has never been to Elko. Kory turns to Dawn in amazement, and they wonder if Rachel’s powers are now such that she made them all imagine that critical encounter. In private, Hank suggests to Dawn that they give their relationship another shot, but she firmly rebuffs the idea. “Hawk and Dove,” however, may still have some days ahead of them, she allows.

Gar takes note of an alert, to cops and bomb squad action in the Mission District. Everyone stops and kind of looks at each other, unsure of who or what they are anymore, until Dawn says, “What are you waiting for…?” Cut to the street, where Nightwing, Hawk, Dove, Starfire, Superboy and Ravager — with Beast Boy and Krypto, too! — march off to save the day.

But wait, there’s more! Just as Season 1’s finale ended with a tease of what was to come, Season 2’s tag scene involves a mother and kids outside a grocery store. After Mom gets everyone and her shopping bags settled, a glob of space goo splats onto her neck and seeps inside — and within moments, we see the mild-mannered mom transform into a smirking Blackfire.