United States of Al‘s dramatic Season 2 opener strikes a bittersweet note. While Al’s sister Hassina manages to get on a plane headed for Turkey, his mother and his cousin are still in Kabul at the end of the episode, as the Taliban completes its takeover of Al’s native Afghanistan.

The episode, which follows Al and Riley’s tireless efforts to get Hassina to safety over seven days and seven nights, was inspired by the actual experiences of the Afghan and military veteran writers on the series who worked together to evacuate family members in mid-August. Series creators Maria Ferrari and David Goetsch detailed that experience at length in the first part of our interview, which TVLine shared Wednesday. Below, in Part 2, the executive producers discuss how this episode took on a form of its own, and how they intend to continue addressing the crisis in the Middle East.

TVLINE | Why was it important to keep the audience aware of exactly how much time had passed with each scene?
GOETSCH | The experience that we had was that, day to day, the news changed. There were these powerful swings, and there was so much uncertainty. A bunch of our staff went on Kabul hours… and weren’t sleeping. So the idea here — to have the Dugan family support Al and stay up, and go through what happens in Act 2, in particular — was to try and create an accurate sense of the rawness that comes from night after night after night of trying to help someone. 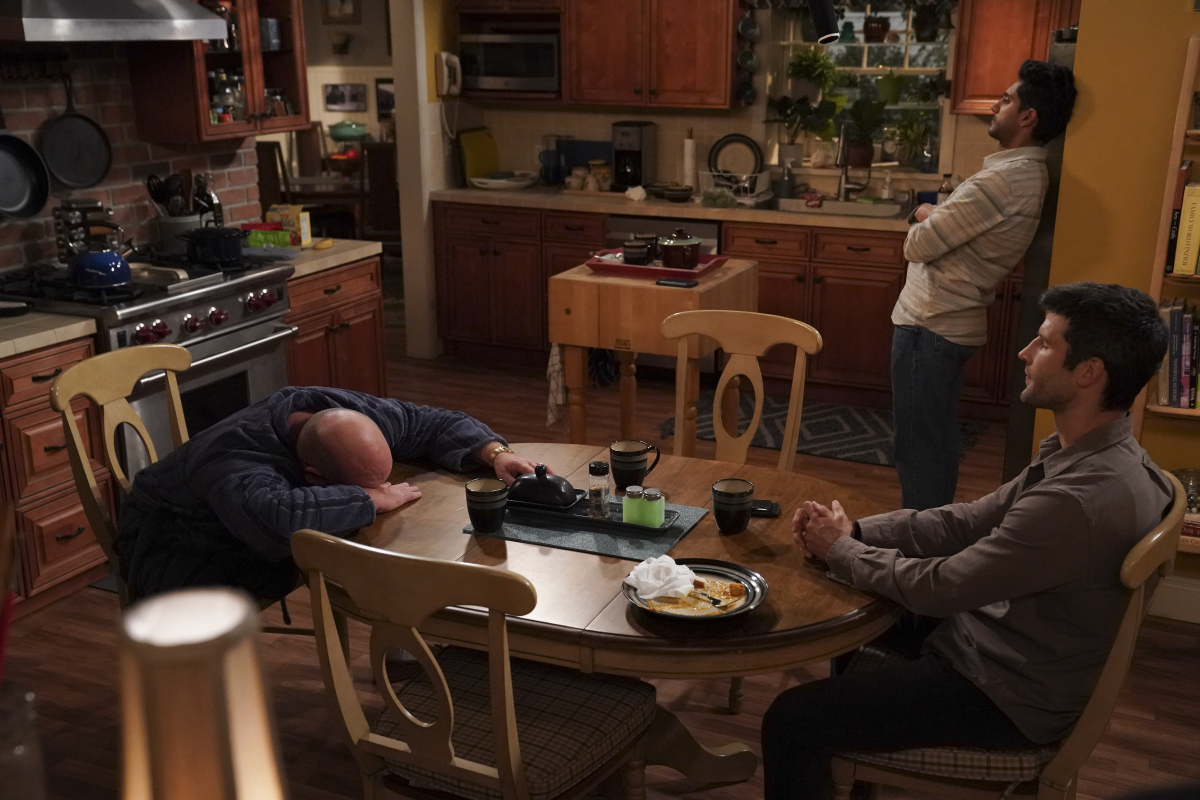 FERRARI | We really wanted to convey the unbelievable sense of waiting that was so much a part of this experience, which is a particularly hard thing to do in a 22-minute show. Like, how can you convey a week’s worth of waiting? Spacing it out over several days helped us do that. Also this staff, because this was their story, they really wanted to tell it as it happened. They wanted the characters to say things like”I didn’t know that” on that day. They wanted to share their experiences as they experienced them.

TVLINE | Something that has impressed me with this show from the get-go — and something I pointed out on Twitter early on — is how unique the camera work is for a multi-cam. You frequently foreground elements in a way that gives Al a very distinct look and feel, which separates it even from Chuck Lorre’s other CBS multi-cams, like B Positive and Bob Hearts Abishola. Here, I was particularly impressed by the handheld approach used in several high-pressure moments — for instance, when Riley and Al are surveying the map of the airport in Kabul…
FERRARI | Our director for this episode was [Big Bang Theory vet] Mark Cendrowski, who also directed our pilot, and he really did try to develop a different visual language for the entire series. And then for this episode, in particular, Chuck and Mark were specific about wanting to give it a feel that would set it apart from the rest of the season from frame one.
GOETSCH | There’s more fourth wall, more movement… Our normal production schedule is to shoot for three days, and we were fortunate enough to get five days, so we had extra time for extra setups. 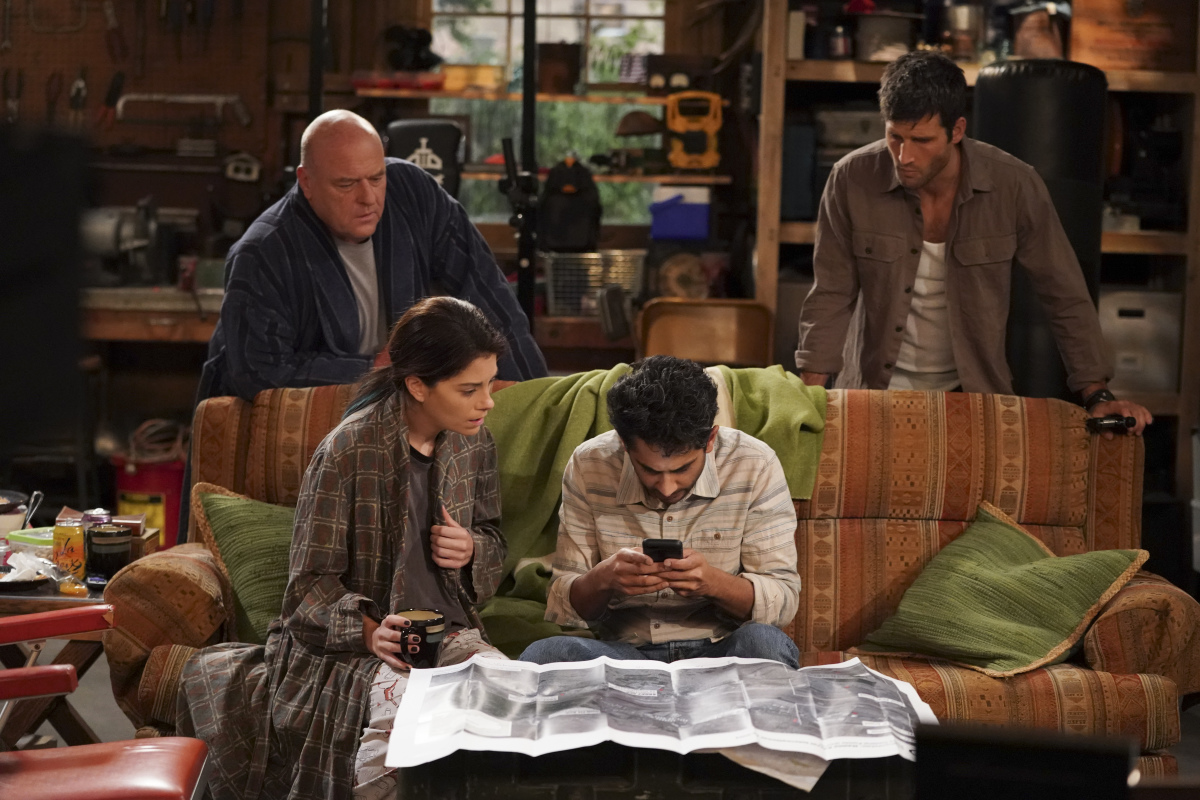 TVLINE | This isn’t your typical sitcom episode — it’s essentially a 22-minute drama — but it’s still shot like one. Were there any downsides to adhering to the format when telling this story, or did having four cameras rolling at all times ultimately prove to be an advantage?
GOETSCH | We’re lucky to have four cameras, to have scenes that are this dramatic and not have to turn one around and match a performance. You can be on multiple actors, like when they’re all staring at the phone, worried. That was a tremendous advantage for us. Because our actors are so talented, in most scenes, they would give us a range of a performance, because we weren’t sure how it was all going to fit together. You could imagine a scene that felt right [as you were shooting it], but then you put it together and that’s not the right thing, tonally. They really gave us some fantastic choices when we got into editing.

TVLINE | In the end, Hassina manages to get to safety, but Al’s mom and cousin Zubair are still in Afghanistan — and the situation is still fluid. How are subsequent episodes going to straddle that line between staying true to the developing situation while continuing to make the show you made last season? Can you return to the tone of Season 1, or do you have to adapt?
GOETSCH | Our tone last season was a mixture of very dramatic moments and very comedic moments, so going forward I think we’ll be able to do that. But Chuck has also been very supportive in saying, “Look, if there is another important story to tell, in the way that we needed to tell this story, then at that time we will consider it.” And that, as creators, is exciting. We hope the situation improves for everyone, obviously, but to be able to have more freedom to tell a story…
FERRARI | It gives us the flexibility we need to be reactive. 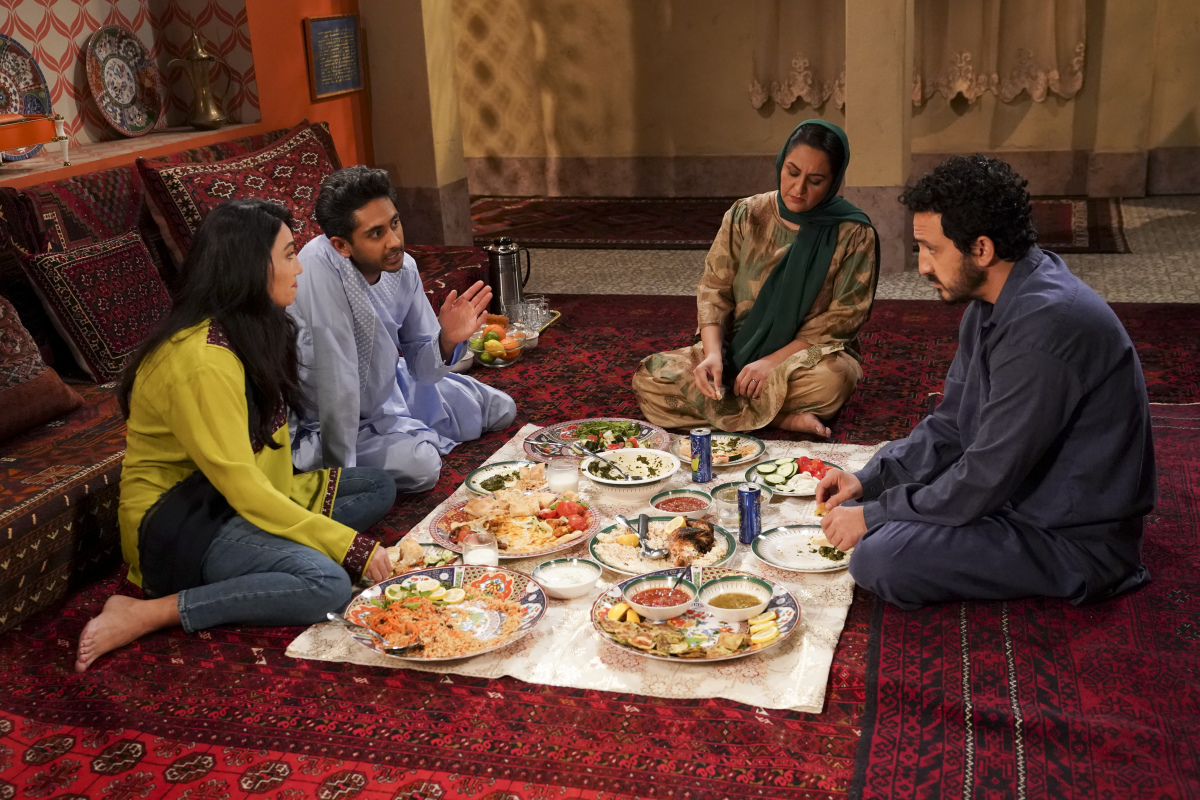 TVLINE | How do the developments in the premiere play into subsequent episodes this fall?
GOETSCH | In the second episode, we’ll see Al getting another job with Riley so that he can send money to Hassina. And in the third episode, we’ll see Al being motivated [in another way] to try and help with Hassina’s situation, so it continues to be a driver of stories.
FERRARI | It’s an interesting situation to have Al’s family in several types of difficulty. As you said, his mother and cousin are still in Kabul, and then his sister is displaced, which is going to mirror the experience of a lot of people.

TVLINE | You made the conscious decision to avoid telling jokes in the premiere. Do the next few episodes ease back into the comedy? Or is there an immediate shift in Episode 2 (airing Oct. 14)?
FERRARI | I am very proud of the second episode. It’s a very funny episode, but it’s not an episode that is meaningless. It’s not about anything frivolous, and the jokes are not flippant. I think that it’s a really good indication of what the rest of the season is going to feel like.
GOETSCH | The goal is to make character-driven jokes, and tell stories that are about something. So even if you are laughing, there is some meaning to it.

TVLINE | Production on Season 2 began far enough in advance that you decided to shelve an episode you’d already produced and intended as your premiere. What happens to that episode now?
GOETSCH | Interestingly, that episode will air as our fourth, and we’ll reshoot one scene…
FERRARI | Maybe more than one scene. [Laughs]
GOETSCH | It still fits into the greater storyline.
FERRARI | Yeah. It has storylines that are still appropriate.

TVLINE | Have you had to adjust your shooting schedule at all, so episodes are produced closer to air? As you said, the news out of Afghanistan changes day to day…
FERRARI | We’re trying to keep things on our regular track. The best way to write and shoot something that needs to be moved up is to not be too far behind to begin with.
GOETSCH | We are in the perfect spot, making a four-camera show on CBS, where those turnaround times often aren’t that long. When you’re shooting in January, it’s airing in February, so to be able to write [not too far ahead] is exciting to us. It might be the best way to tell this story.

Grade the United States of Al premiere in the following poll, then drop a comment with your full review.