As soon as the Taliban reclaimed power in Afghanistan this past summer, it became evident to everyone involved with CBS’ United States of Al that they’d have to scrap their previously planned Season 2 premiere and return to the drawing board.

“We had already shot [our premiere],” series co-creator Maria Ferrari tells TVLine. “We had just gotten the first cut, and we were supposed to review it when we said, ‘We have to stick a pin in this one.'”

As that decision was being made, several of the series’ Afghan and military veteran writers were working towards getting loved ones safely out of the Islamic State, as the Taliban moved quickly to block all commercial flights out of the country.

“Some of the people on our team were working toward, and succeeded in, getting brothers and sisters and sisters-in-law out, and that was our number one priority,” recalls fellow creator/EP David Goetsch. “But they also felt it was important to tell this story. They felt, rightly, that by October, America might have moved on and would be worried about other things on the front pages.” 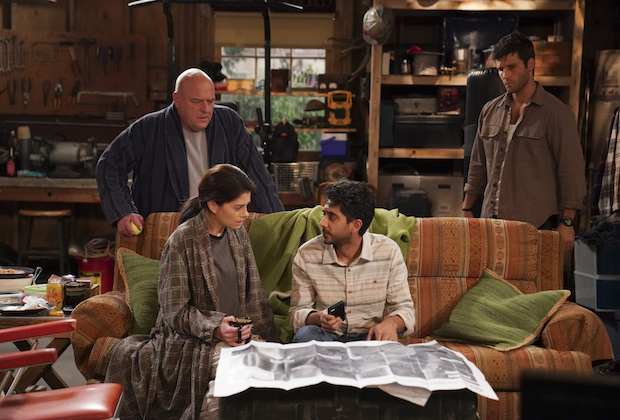 The result was a new Season 2 opener (airing this Thursday at 8:30/7:30c) that reflects what they’d been through together — one that would also play the reality of the crisis as it first escalated in mid-August.

“We didn’t have time to take a step back [and reflect],” Ferrari says. “It was unbelievably raw, and gut-wrenchingly hard for these writers. There was always someone crying, and we would rotate them out. It was emotionally strenuous, and it was not something I would have asked of the staff under normal circumstances.”

In the episode, Al, Riley, Art, Lizzie and Vanessa work together against a ticking clock to get Al’s sister Hassina to safety — and you can get a feel for the series’ dramatic departure in TVLine’s exclusive sneak peek above. In the scene, Al is on the phone with Hassina, who is worried that the Taliban will find out about her job with the United Nations. Riley, meanwhile, is on the line with a fellow Marine, trying to get a sense of the situation as it unfolds.

Viewers will notice that the episode does not feature a laugh track, which the show had been forced to use throughout the pandemic in lieu of a live studio audience.

“When we first began to write, we said, ‘We’re not writing jokes, so just take that piece out of the equation,'” Ferrari reveals. “And then as the script came together, we said [to fellow executive producer Chuck Lorre], ‘It doesn’t sound like this one is going to have a laugh track.'” That’s when Lorre pointed out that this was the first time in his career that one of his multi-cams hadn’t featured any audience laughter whatsoever. “He was like, ‘All right, you’ve invented a new format.'”

For Part 2 of our interview, featuring premiere spoilers, click here.