Ladies and gents, meet the other Legarski brother.

We’re formally introduced to Big Rick’s twin, Wolfgang “Wolf” Legarski in this week’s Big Sky (although portrayer John Carroll Lynch kinda did the honors after the season premiere last week). And we soon learn that Wolf takes an animalistic mentality to life: So if you’re not in his pack, you’re in trouble.

As you might guess, Ronald doesn’t take kindly to this philosophy, and he refuses to cooperate when Wolf requires him to ask politely for his breakfast. After all, Rich said “that you were a weak, degenerate hippie,” Ronald scoffs from inside the cage where Wolf is keeping him. But Wolf very calmly informs Ronald that Rich was not Ronald’s friend, and “It is my mission in life now to undo all the evil he unleashed on the world. And that starts with you.”

Sounds nice, right? That’s until we learn that Wolf’s preferred method of keeping Ronald in line involves beating the younger man with a giant stick. Wolf refers to him as “the alpha” and tells Ronald that he’s going to have to earn his way into his pack or be put down like an ailing dog. And Ronald doesn’t care much… until he sees Scarlet gardening with an older woman on Wolf’s property.

The pair of murderous lovebirds aren’t allowed to talk to get near each other, and Wolf hints that Scarlet is doing a better job than her boyfriend of being an obedient houseguest. But there’s no way that ol’ Scar isn’t going to stick a trowel into that other woman’s trachea in the next episode or two, right?

Meanwhile, back in town:

* Spooked by the photos of Kai they found in State Trooper Dewey’s home, Cassie tells Lindor that she’s done hunting Ronald. Later, Lindor and Jerrie go gun shopping (she just passed her private-investigator certification exam!) and then out for dinner; it kind of feels like a date to us, and maybe to Jerrie?, but it turns out that Lindor really just wants some help figuring out how to get Cassie to let him in. “Let her come to you,” Jerrie suggests. 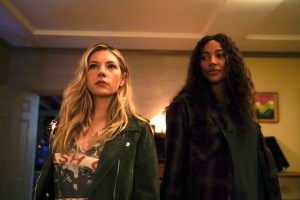 * Tonya (The Sopranos‘ Jamie-Lynn Sigler), a diner waitress, asks Cassie to help her find her missing boyfriend, Big Sam. He was supposed to pick her up one night but never showed; now she can’t get in touch with him. We soon learn that Big Sam is the guy who was driving the truck on the night of the accident. Speaking of the truck, Jenny finds blood stains and a hidden gun compartment in the vehicle, which had its VIN number sanded off. Eventually, Jenny and Cassie realize that they’re working the same case.

* After Max uses $2,000 of the stolen money to pay her mom’s dental bill, she tells the rest of the teens and then doles out $2,000 each so they’re even. Meanwhile, Bridger goes to the sheriff’s department to confess everything but gets cold feet after he sees that the whistling man from the night of the accident — the one who shot the driver — is a state trooper. Harper and Max have their first kiss as Max is panicking about what to do with the money and the drugs; Harper suggests that she have a co-worker sell it for them. But that night, as Max is sneaking out with a sample for Harper’s friend, T-Lock catches her and wonders why she’s slinking around with illicit substances in hand. Also: What is up with the guy in the woods with the knife who keeps spying on the teens? He seems creepy, especially when he yells “I saw you!” at Harper and Max, but I have a feeling he’s going to turn out to be a good samaritan of sorts. Just a hunch.

* Ren (played by True Blood‘s Janina Gavankar) arrives in Helena, looking for the money and drugs (hers, of course) that went missing after the truck crash. She is brash and impulsive; flanked by her bodyguard, Donno, she doesn’t seem afraid of much. She and Donno pay Tonya an intimidating visit at her diner, then later swing by the house while the freaked-out waitress is hastily trying to pack and flee. They tie her up and toss her in their backseat, driving off well before Cassie and Jenny swing by and see the wreckage.