A couple of bullet holes through the torso really makes you stop and think, apparently.

So in Big Sky‘s Season 2 premiere, Jenny — who is on the mend after her shooting at the end of Season 1 — makes a big decision: She accepts Sheriff Tubb’s offer for her to return to law enforcement. “I have a second chance, a do-over, and I want to take it,” she says, accepting the position of undersheriff. And when she tells Cassie that she’ll no longer be an active partner in their private investigation business… Cassie takes it pretty well, actually.

Maybe that’s because she’s distracted by trying to track down Ronald, a hunt that leads her (and Lindor, who also survived his injuries but who is suspended from the U.S. Marshals at the moment) to the home of State Trooper Cormac Dewey. A neighbor’s birdcam captured footage of Dewey taking Scarlet from her home the day she disappeared. He stonewalls their questions, giving only a cryptic warning, “They are watching: you, me, everything.”

Later, when Cassie and Jerrie return for another stakeout, they see that his door is open and a window is broken. So they go inside, and find him dead in the living room,  gardening shears through his windpipe. When Lindor arrives, Cassie shows him what she took from the scene before the police showed up: a folder containing surveillance photos of her and her son, Kai.

Meanwhile, Jenny runs into one of Cody’s old pals, Travis, at a bar. But he pretends not to know her. Only later, when he shows up at her place, do we realize that he’s an undercover cop who couldn’t risk blowing his cover. They flirt. She mentions that her son just left for college. And pretty soon, they’re kissing and she’s climbing on top of him. (Careful of those stitches, Jenny!) 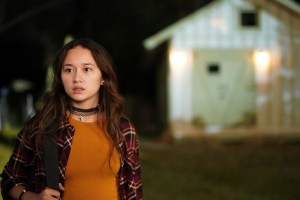 Elsewhere in town, a teen girl named Max — who sometimes babysits for Kai — meets up with her friends at a lookout in the woods. They witness a car crash in which the driver begs them to take the bags and run. So they do, hiding nearby as a whistling man arrives and kills the driver. Max stashes the bags at her house, and she and her friends agree that they’re in too deep to call the police. Unbeknownst to the teens, a man watches them, hidden under cover of trees.

And then, in the episode’s final moments, we’re transported to a property with a lot of animals in cages (one, we see, is a goat named Fluffy). A man brings eggs and bacon in the shape of a smiley face out to a huge, locked box set back from the house. “Wake, wakey, eggs and bakey,” he chirps, opening the box to reveal that it’s actually a cell where Ronald is being kept. And the man unlocking the cell looks a lot like Rick Legarski, only with a ponytail and bad teeth. “Ronald, my dear boy, let us begin.”

Though John Carroll Lynch‘s return had been confirmed prior to the premiere, the show had kept all character details under wraps. So, naturally, TVLine jumped at the chance to talk with him about playing the second coming of Legarski (whose name, by the way, is Wolf). 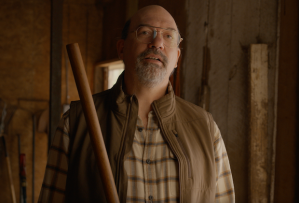 TVLINE | So I have much more important questions, but first I need to know about the teeth and the hair.
[Laughs] The minute Elwood [Reid, showrunner] and I started talking about the character, and what might happen, and who he was, it was an interesting exploration for me to, over the summer, start thinking about how would he be different from Rick? What would be different? And the first kind of thesis that we both agreed to was, he’d be as far away from Rick as we could get. And the ponytail: I started looking at images of people who were in the world that Wolf was to inhabit, animal trainers, people who worked with dogs a lot, and I saw a guy with a ponytail and that really kind of started to gel for me. I sent it to Elwood. He thought it was a good idea.

It really came to this: Hair that length, especially for a bald man, requires a lot of care and effort. It took years of care and effort. And usually it means care and effort from someone else, and the idea that Wolf had found a partner that understood him 100 percent, that he didn’t feel he needed to hide from, that could care for that ponytail as he cared for her, that sounded like an interesting kind of foundation to do.

[Laughs]  I will say that Elwood was like, “I’m not sure about the teeth.” And I said “OK, here’s the thing.” My own brother, Dan, when we were kids — it was not malevolent or malicious or anything like that — we had a Town & Country station wagon, and he was in the foldout seat that faced out the back of the station wagon. We pulled into the driveway, and I was running around the car, and he opened up the door at the same time that I was coming around. That Town & Country door swung right into my face and broke my front tooth… I had to go in this summer to get a new cap put on that tooth. It has been a wound, inadvertent by my brother, from the time I was 11 years old. Absolutely accidently, but it has cost me. It will continue to cost me until the end of my life, and it occurred to me… as the connection to a wound a brother can give another that costs them their entire life, I liked that to be a foundational moment. We may not have referred to it, it doesn’t have to be in the story, but at some point in the past, Rick cost Wolf his front teeth.

TVLINE | We don’t get a lot about Wolf in this first episode, but he seems to have a generally sunny outlook.
Oh, yes. Absolutely.. He has a lot of foundational love and joy in his life. He’s found his calling. He has a partner that gets him. He lives in a world of his own creation, but just as anyone who does that, lives in a world of their own creation, they are kind of deluded about themself and the world. So, I don’t want to discount the pure, misguided nature of Wolf Legarski. In his own way he’s just as misguided as Rick was.

Now it’s your turn. Grade the premiere via the poll below, watch Carroll’s return in the video above, then hit the comments with your thoughts on the episode!