Sometimes the difference between a genius Survivor move and a stupid one lies solely in the results.

On Wednesday’s episode, JD offered his extra vote to Shan for safekeeping after the “Mafia pastor” called him out for hiding something in his shorts. Shan and Ricard were highly bothered that their alliance-mate would keep such a secret, so he knew he had to do something. He just didn’t know which side of history his Hail Mary would wind up on.

“This either is a brilliant play by me or one of the dumbest mistakes in Survivor history,” said JD in an interview. And it really could have gone either way! Had Shan kept the extra vote and wrote the guy’s name down, JD’s ploy would’ve gone down in the record books as sloppy and mind-boggling. However, his extended olive branch worked, because the college student from Oklahoma was not the one sent packing at Tribal Council. Who was? Read on for a full recap.

EVERY! BODY! GETS! AN ADVANTAGE! | Before we continue any further, we must discuss the elephant on the island: So we’re just leaving advantages on the ground now? Right in camp, and out in the open? Okaaay. Understandably, production wants these things to be found because they want to reap the narrative benefits of their pre-planned curveballs. But no longer hiding these game-changing little buggers seems too easy. Cheap, even. Alas, here we are. 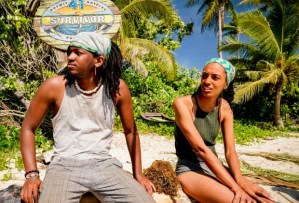 Tiffany wakes up to find a Beware advantage right under her nose. It dictates that she must get on a boat in the middle of the night to make a decision, and if she doesn’t, she loses her next vote at Tribal. Over at Ua, the Beware 2.0 is again completely visible, this time behind Brad as he’s working in camp. It’s just THERE. Look, we get that advantages aren’t going anywhere (Probst himself told us that a “back to basics” season isn’t likely), but these simply don’t feel like celebratory “finds.”

Brad lets us in on a secret: He and Genie found the idol advantage. We flash back 30 minutes prior to see Brad finding last week’s “secret phrase” Beware advantage. Then he tells Shan (which he definitely should not have done), and also spills the beans about his first advantage! Brad clearly has never heard the phrase “loose lips sink ships,” because this guy just gave a fierce competitor the ammo to sink his battleship.

Tiffany’s boldness rubs Sydney the wrong way. When Sydney hints that she wants to play it safe, Tiffany asks, “Do you want to play it safe, or do you want to play Survivor?” She’s right, but if someone said that to me just seconds after we met, I’d likely be peeved, too. Especially if I was hungry. The next morning, the results are in: Sydney and Tiffany get nothing. Brad earns the steal-a-vote. 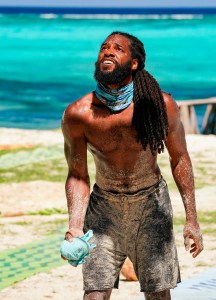 COME ON IN ! | Immunity is back up for grabs, but first, are these jokers gonna spit out all these ridiculous phrases? You betcha. Brad talks about his weight loss and refers to himself as a little broccoli tree (botching the entire line, but A for effort, Brad!), while Xander repeats the bit about his dead butterfly relatives, making him look like a real nutter. (This is just gonna get sillier and sillier every week, huh?)

In the challenge, players must swim out and cross a rope bridge hanging over the water. Then they must dig up sandbags and land them on some high platforms. In addition to immunity, the winning tribes will win a tray of fresh fruit.

The ropes look tricky: There’s one rope across for players’ feet, and just four ropes hanging vertically to help them traverse. It seems to be the same ol’ story: Luvu crushes it and pulls way ahead, while Yase picks up the rear. Luvu finishes first, while Xander lands Yase’s bags and wins them immunity! It’s official: Someone from Ua’s getting snuffed tonight.

STRATEGY | Brad’s idol is powerless, and he can’t vote, but he still wants JD out. As Shan starts a story by mentioning JD’s bathroom excursion, we’re treated to actual footage of a bird pooping in the woods. Are we being trolled?! Advantages being left out in the open! Animals defecating on national TV like it’s National Geographic! Wednesday nights on CBS are just that wild, kids.

It was a short couple of seconds, but enough to completely distract me from whatever Shan was trying to say. (Yes, I had to rewind.) Anyhoo, Shan sees a clue poking out of JD’s shorts when he returns from hanging out with island birds. He comes clean to Shan and Ricard (though as she recounts, he didn’t “come clean,” he got caught). She then tells Ricard they have to vote him out, but Ricard has his eye on Brad. 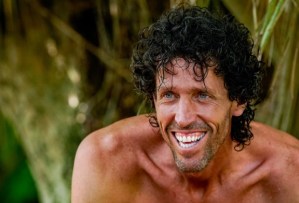 JD knows he lost trust with his alliance, which makes him nervous. As a peace offering, JD allows Shan to hang on to his extra vote for safekeeping, and like we mentioned before, he knows it’s either a game-saving idea or one of the dumbest moves ever. Dumber than J.T. gifting Russell an idol (Heroes vs. Villains), or Erik giving up immunity (Micronesia), or James going home with two pocket idols (China)? We’re about to find out.

TRIBAL COUNCIL | The subject of trust comes up, which gives JD the perfect in for a mea culpa. Shan says it’s hard to rebuild trust once it’s broken, and there’s a whole big crystal-smashing metaphor, which I guess makes sense to people who haven’t eaten in a week.

JD tells Jeff how Survivor built him up and gave him the confidence he needed in life. “When I tell you that Survivor made me who I am… that’s not a front. I just wanted to play Survivor, and even if it’s cut short, I got to do it.” (PLEASE DON’T VOTE HIM OFF, UA!)

It’s time to vote, and we see JD write down “BRAD” before Jeff gets to tallying. The host reads the votes, and Brad (along with his two advantages) is sent home 3-1. And the dude is gobsmacked.

Glad to see JD live another day? Find all these advantages confusing as heck? Drop all of your thoughts in the Comments below!