Future players: If you should ever come across a hidden advantage or clue marked “Beware,” then for the love of the Survivor gods, be-friggin-ware!

If the unofficial theme of this season is “no risk, no reward,” then Episode 2 raised that to stratospheric heights. Not only was the brand new advantage Jeff planted in the premiere found this week, but it’s part of a trio of immunity idols hidden throughout all three beaches. But that’s not even half of it: The “lucky” castaway who found it can’t vote at Tribal until the other two companion pieces are found! Talk about a Survivor first, and a brutal one at that.

So who found it, and what other deets did we learn about this illusive Beware advantage? Let’s break it all down in the recap below.

UA | Paranoia is hitting Brad hard. When JD and Ricard go to the water hole, Brad summons his inner Tony Vlachos and hides in a large bush to eavesdrop. Brad’s buggin’ because JD — who was previously buggin’ last week — is now cool as a cucumber. But Brad tells Shan about the convo he overheard (which really, doesn’t seem that juicy of a share, but OK), and she runs and tells Ricard about Brad’s suspicious behavior. And just like that, the farmer from Wyoming becomes a new target.

YASE | Xander and Liana’s spider-senses tingle when they can’t seem to find any of their fellow castaways. They split up to look around, but Xander instead uses the time to go hunting, and boom! He finds the mischievous Beware advantage. According to the instructions, if he takes it he must do what it says. Otherwise, he’s gotta leave it behind.

He rips that baby open faster than a grade-schooler on Christmas morning, and learns it’s a three-way shared idol, but in order for it to have any power, the other tribes must first find its counterparts. At the next immunity challenge, Xander must say a secret phrase in front of the other players. If another player from an opposing tribe has found another portion, that person will reply with a different secret phrase. Once all three phrases are said at the same challenge, then all three idols become active.

But there’s a catch, and oh boy, is it a biggie: Xander can’t vote at Tribal Council until all three Beware advantages have been found! This (dis)advantage could haunt him for the rest of his game. Think it’ll pay off?

Xander lets Evvie and Voce in on the advantage deets, and also tells them about his extra vote, too. (Aside: So if he can’t vote, can he gift the extra vote to one of them to use? Based on precedent, it seems like that should work, but this season’s a whole new ballgame, so who knows?) Evvie, however, finds Xander to be dangerous. They know that if they get to the end with him, he’s gonna get all the credit. (Women are often judged unfairly in the finals when sitting side-by-side with their strategic equal. The jury reactions to Dawn and Cochrane in Caramoan, and Becky and Yul in Cook Islands are just a couple examples). Evvie wants to work with the women, so they tell Liana and Tiffany about both of Xander’s advantages! If Yase loses immunity, expect fireworks.

IMMUNITY CHALLENGE | Jeff asks the tribes how they’ve been handling the elements, and Xander replies that he’s so tired and delusional, he thinks that butterflies are dead relatives saying hi. (Secret phrase — check! Unfortunately, no one responded to this bit of insanity.)

For the challenge, one castaway swims out, dives down and retrieves a key. Then, two other members race across a series of obstacles. Once everyone’s on the mat, the last two must unlock and complete a puzzle. First two tribes to solve it win immunity and a batch of fishing gear.

Luvu whips through the obstacle course, but Tiffany is a hot mess on the balancing beam. She’s completely gassed out, falling off the beam multiple times and more or less ruining her tribe’s chance at winning. Probst offers up some encouragement that gives her the motivation she needs. Liana makes quick work of the course, hoping to get Yase back on track, but it’s too late: Luvu and Ua finish the puzzle, giving Yase a date with Jeff.

Luvu must then select two people — one from Yase, and one from either of the remaining tribes — to go on a journey and make a decision. They choose Evvie and Deshawn.

STRATEGY | Tiffany tells us that she may have cost the tribe “a minute or two” on the beam, proving that delusion just might be the most real aspect of reality TV. Regardless, she says, “It really has to go very wrong for me to go home tonight,” implying that her alliance with Evvie and Liana will keep her safe. Xander and Voce understandably want to vote her out, but without Xander’s vote (and if Evvie does, indeed, flip), they’ve got an uphill battle. 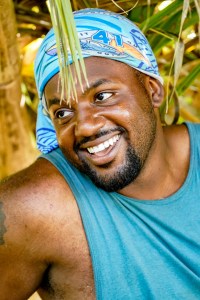 DECISIONS, DECISIONS | Evvie and Deshawn take the same hike from last week. Evvie tells Deshawn that there’s no way they can risk their vote, so they’ll protect their vote, and he can go ahead and snag the extra vote with no real risk involved. The pair agree to work together going forward, should they meet back up during a swap or the merge. Evvie then tells D how the idols work (!) and that Xander has one (!!). They are spilling their guts left and right this episode, and as they tell us: “I’ll reveal some things, but mostly other people’s secrets. That’s basically my strategy.” Interesting! This could earn them some serious social capital in this game. Information is power, and if Evvie trusts the right people, they could go very deep. (Or get caught up in the blabbing and sent packing. Either or.) As planned, Evvie protects their vote, and Deshawn “risks” his.

BACK AT YASE | Evvie returns and tells the tribe they protected their vote. They then check in with the ladies and confirm they’re voting Xander… until Tiffany panics. She wants to switch the vote to Voce, (which seems like the right choice if she wants to protect herself from a possible idol), but all Tiff’s scrambling does is put doubt in Evvie and Liana’s minds. Do they really want to work with someone who’s struggling to keep up with the game, and seems rattled under pressure?

THE TRIBE HAS SPOKEN | Tiffany mentions that she can’t “be happy and social and play this game on zero food and no sleep” (uhh, maybe she should’ve applied for Big Brother then?). She stresses that Survivor is more than just challenges, it’s a social game, too. Meanwhile, Evvie weighs the benefits of voting based on loyalty or strength, which Xander says is like “juggling chainsaws.” With that, it’s time to vote (unless your name is Xander). No one plays the Shot in the Dark die, and when Jeff calls for hidden goodies, nothing is played. David Voce then becomes the third person sent home in a 3-1 vote.

Did Yase make the right call, and was it smart of Evvie to give Deshawn so much information? Drop your thoughts in a comment below.