Host Jeff Probst promised us that Survivor 41 was going to be dangerous. He warned us to buckle up. We still weren’t ready.

The island-hopping competition series officially returned to air Wednesday, with the two-hour Season 41 premiere. With more downtime than usual between seasons, Probst and his team revitalized the game, hoping to usher in a new era of Survivor that would challenge its contestants in new ways, while continuing to push them to the brink. Let’s just say… Mission: Accomplished! (Read what Probst had to say about the season here.)

What new twists did the show throw at the castaways, and which two (!) players saw their games fizzle out? Read on for a full recap.

We open with Probst telling us directly that he missed us. (Aww, the feeling’s mutual, bud!) He says we’re “co-conspirators,” who’ll be aware of twists and turns before the players are. There will be small tribes, no rice, a new “Beware” advantage, and as he warns: “You’ve got to earn everything!”

We cut to footage of the production team setting up for the marooning (a nice behind-the-scenes touch. I like it!), then without further ado, we dive right in.

GAME ON | As three boats cruise through the blue water, we meet a former NFL player, a “mafia pastor” and an excited kid who was born after Survivor first premiered! (Wow, I’m old.) The castaways board a barge, and everyone is amped. Jeff welcomes them to the 41st season, and you know what? Probst seems pretty jazzed, too! While he chats with the new players — which include Naseer, who claims to have learned English from watching Survivor, and Heather, a fan since Season 1 — he asks the group a serious question: Is it OK for him to continue using the phrase, “Come on in, guys!” No one takes issue with the gendered phrase… at least to start.

He then breaks down that the season will be shorter, with no time to breathe and nowhere to hide. Tribes will receive one pot, one machete, one flint and not a damn thing else. “This is a new era of Survivor,” he warns. But in order to get those meager items, they have to win the first challenge. If not, they’ll have to earn them down the road.

The three tribes — Ua, Yase and Luvu — have to find all six of their paddles, swim out to a boat, then paddle around a buoy and back to the barge. The first to grab the hanging flint, wins. While the Yase tribe can’t even find its last paddle, the Luvu team neglects to unclip from the anchor! (Rough start, guys!) Ua smokes the competition and secures all of the goodies. 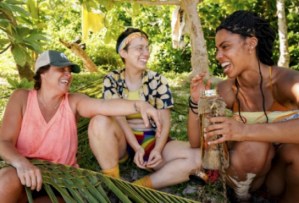 DECISIONS, DECISIONS | Over at Ua, Sara tells us she lost her grandmother to COVID, while Brad, a cattle rancher, also suffered a recent loss: His dad died one week before he left to play. Thanks to JD’s pre-game practicing, he’s able to quickly make fire with the flint. (This kid seems like a true super-fan, and I like him already.)

The Yase and Luvu tribes must both choose between two arduous tasks: “Savvy” or “Sweat.” Savvy will challenge their puzzle skills, while Sweat requires two players to fill large barrels with ocean water. They’ll have four hours for whichever task they choose. If they fail, they won’t receive their supplies until after the first immunity challenge. Both teams choose Sweat, with David and Xander accepting the physical challenge for Yase, and Danny and Deshawn taking lead for Luvu.

The Luvu twosome spend some of their precious time searching for idols in the rocks, but Naseer catches them in the act and rats them out to the tribe! This gives Naseer the perfect moment to pitch a Final 4 to the rest of the bunch. Danny and Deshawn complete their challenge, but they’re also clued in on Naseer’s loose lips. (The Yase tribe also completes the mission.)

Back at Ua, JD tells us he doesn’t want to be the guy who’s constantly talking strategy, but his desire to lay low isn’t working. He quickly lands on Ricard, Sara and Shan’s hitlist. And while Pastor Shan talks smack behind JD’s back, she assures him to his face that she’ll come to him if she hears his name. Then she makes deals with seemingly everyone else on the beach. Looks like she’s here to play, but is this too much, too soon?

DAY 2 | A note says that one player must get on a boat, “take a journey and make a decision.” No one on Luvu wants to go, but Danny bites the bullet and volunteers. Xander heads out for Yase, while JD is the chosen via rock draw for Ua. 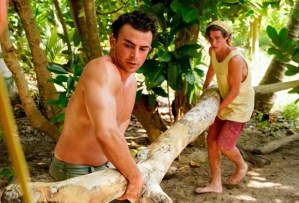 The three men arrive at a different beach and are told to head up to a summit, and get to know each other on the way. At the top, they’re told to separate and make their decisions in private. They must choose between “Protect Your Vote” or “Risk Your Vote.” If they all choose protect, nothing is lost or gained; if they all choose risk, they all lose their votes at the next tribal council; and if the decision is split, the players who protect their vote won’t lose a thing, but the players who choose to risk it, will receive an extra vote. Danny opts to protect his vote, but we aren’t told what the other two decide.

Danny returns to his tribe, and he tells them the truth. According to Heather, everyone seems to believe him. Xander risked it, and also tells his tribe the truth. (Was it smart to tell them that though?) JD recounts the story to his tribe, too, and says he protected his vote, but Ricard doesn’t trust him at all.

IMMUNITY IS NOW UP FOR GRABS | Ricard speaks up, telling Jeff that he actually doesn’t agree with the “Come on in, guys” thing from before. Jeff assures them that that was the last time he’ll ever use the word “guys” while addressing an entire group. If anyone has a problem with it, you can hit him up on Twitter @JeffProbst, he says directly into the camera. Though he jokes, “I’ll probably never read it anyways!” King Probst is HERE.

And with that, it’s time for another twist! Meet the “Shot in the Dark” die. If a player is at Tribal and fears for their safety, they can use a special die that will rob them of their vote, but will give them a 1-in-6 chance at safety. Players will reach into a bag and pull a random parchment, one of which will read: SAFE. All of this is done in private at the voting booth, so no one will know the decisions made until just before Jeff reads the votes. And each player can only do this once. (These are some huge changes, and I’m here for all of it.)

So how about that challenge? Obstacles, heavy sand bags, puzzle pieces, etc.! And only the first tribe to complete it will win immunity. Both of the losers are heading to Tribal, and must forfeit their flint and earn it back later.

The challenge begins, and Yase takes an early lead, while Jeff sends Luvu back to the start for not having a bag on the platform. As teams struggle to drag their puzzle pieces (plus a sled) up to the top of two high platforms, Ua is first to begin the puzzle. As usual, the puzzle is an almighty equalizer, and Luvu makes an incredible comeback and wins the very first immunity of Survivor 41.

STRATEGY | At Yase, Liana and Tiffany want to take out Abraham, since he’s targeting Tiffany, but Evvie is concerned about chopping a female so soon. They want to join the women to cut Abraham. Despite trusting her gut, Tiff goes idol hunting. In the episode’s first few seconds, Jeff showed us where he was hiding an advantage; now, we see Tiffany searching in that same location before she gives up and moseys off. Love it.

At Ua, Sara feels threatened since she messed up the puzzle, but Ricard is quick to throw JD’s name out in the open. Brad then says that Shan and Sara are on the table, but says it right in front of their faces! Wild. Then he tells JD that everyone’s throwing him under the bus! (Sooo, Brad’s got zero poker face, huh?) 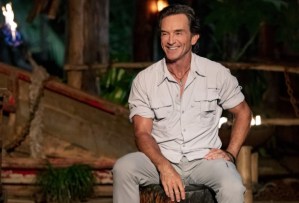 TRIBAL COUNCIL #1 | The Yase tribe is up first, and the divide between Tiffany and Abraham is clear. Jeff brings up the Shot in the Dark, which David says is terrifying, but logically may not be as scary as it seems. Liana chimes in, saying it can cause a ton of chaos, and completely stir up the game. When it’s time to vote, no one uses their special die. Xander, however, learns he received an extra vote from his outing with JD and Danny. The last time he can use it is when there are six players left in the game.

TRIBAL COUNCIL #2 | Ua’s up next, and Ricard and Shan talk about how genuinely “kumbaya” they all are. (Funny, because wasn’t Ricard trash-talking JD for the last two hours or so?) It doesn’t take long for the whispering to start, as Shan and Sara fear it might be one of them. (Yes, we still wish the show would ban Tribal Council whispers — here’s why.) Jeff asks JD if the whispering concerns him (which, of course, it does), causing Sara to speak up. “Are we about to make this a live Tribal? I’m down!” yells JD.

As Brad defends why he was throwing out names, Ricard is out of his seat, telling JD to write down Brad’s name! Then JD gets up to tell Shan that voting Brad is a terrible idea! JD tells Shan he’ll do whatever she wants, but we don’t hear exactly what that is. Sara panics and considers using her die… and then everyone is putting their die in their pocket!

When JD approaches the voting booth, he learns that he also earned an extra vote. When Jeff tallies the results, the votes are all over the place… until they’re not. Sara becomes the second castaway sent home, with four votes placed on her name.

Phew, that was a meaty premiere, Survivor fans! Are you loving this “new era” so far? Grade the episode below, then set the Comments ablaze!