This week’s Evil gives us a toybox full of new information about Sheryl’s creepy little pal, Eddie, yet leaves us scratching our heads about how the demonic doll is going to mess stuff up for everyone — maybe as soon as next week’s season finale?

The hour also gifts us with a tender, charged interaction between David and Kristen. Oddly, it’s the second “would we be romantic partners in a parallel universe?” conversation that I’ve recapped this week. One more, and we’ll have a trend!

Read on for the highlights of “D Is for Doll.”

DON’T OPEN THE TRUNK! | Let’s do the doll stuff first. A widower named Nathan (played by Chicago Med’s Ato Essandoh) with a teenage son comes to the Church with reports of sensing a shadowy presence in his house. At first, it seemed to center on him. Then, it became more interested in his kid, Elijah — to the point that the boy thinks he was pushed by an unseen force, which resulted in a broken arm.

When David, Kristen and Ben arrive at Nathan’s house, they find a stain on Elijah’s ceiling; Nathan thinks it’s water seeping in from the attic above. The trio go up into the attic, which smells terrible, and find a trunk bound with rope. Nathan says that his dead wife’s things are being stored there; when Ben opens the trunk, he finds a porcelain doll similar to Sheryl’s Eddie inside. 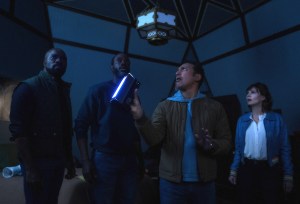 Indeed, this doll’s name is Eddie, as well. Nathan reports that his wife bought it at a flea market 10 years before, and that it came with a long list of rules for the object’s care. But she told him she’d gotten rid of it. Our team is called back to the house soon after, because Elijah felt the presence again and tried to saw off his cast — bloodying himself in the process — to alleviate the crawling sensation he felt underneath the plaster. This time, when Ben uses UV light to scan the area, it reveals three demonic shadows on the kid’s bedroom walls.

After David posits that they’re witnessing a demonic infestation, it’s enough for Monsignor Korecki to send a trained Church layman named Gregory to the home — though David protests, saying that Father Amara would be a better choice. And when Gregory arrives, we see why. He’s a showy, rude, leather-clad amateur who invokes basically every exorcism trope you’ve ever seen in popular media. (For my daytime people: He also really gives off an early–’90s-Todd-Manning-From-One-Life-to-Live vibe, but that is neither here nor there.) Nathan is impressed, David is embarrassed. But Kristen’s reactions to Gregory’s theatrics are gold. 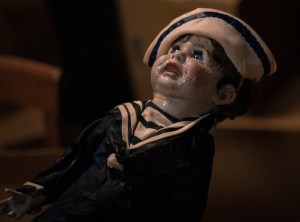 Kurt has been shadowing Kristen & Co., hoping to eventually write a book about their work (despite the fact that both David and Kristen tell him not to). And after Gregory does his schtick, Kurt has an encounter with a horned figure in the hallway; it boops him on the nose. And yes, what you just pictured is exactly what happened. When Kristen finds Kurt, the figure disappears, and the shaken doc doesn’t mention that he saw anything… but Kristen notices a black spot on his nose from the touch. So yeah, it definitely happened.

Though Ben took Nathan’s wife’s Eddie doll, Nathan asks for it back: “I didn’t tell you everything,” he confesses, adding that the shadow is still around. He tells them that his wife would give Eddie “little gifts to keep him happy.” A month after he convinced her to stop, and they put the doll in the attic, she died of heart disease. 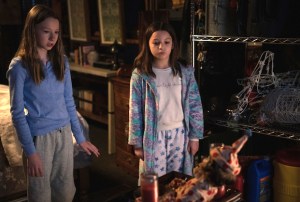 EDDIE X 3 | Meanwhile, Kristen’s daughter, Lynn, babysits a little boy who has a “friend” who tells him what to do. She soon discerns that the “friend” is another Eddie doll — this one dressed like a clown — and at one point when they’re playing hide-and-seek, it seems like a dark figure is sitting in a rocking chair in the corner of the boy’s room. “He just seems small,” the boy says, “but he’s actually big.” Shudder.

When she returns home, the doll is in her bag. But when the boy’s parents come looking for it, saying that the boy is very upset that his toy is missing, Lynn tells Kristen that she didn’t take it. She theorizes that the boy put the doll into her backpack because he’s afraid of it. And when she goes to retrieve the doll from her bag in the closet… it’s gone.

We later learn that Laura, the youngest daughter, nabbed the toy. And when she goes to put it back, Lexis (aka Tail Daughter, who I inadvertently mis-named at first, and thank you to those who brought it to my attention) catches her and mistakenly thinks that the doll is the one she saw in Sheryl’s room. So the pair of them sneak into Grandma’s shed, leave Clown Eddie there, and run screaming from the place when the train rumbles by and makes everything shake.

Let’s put a pin in this plot, because meanwhile, over at the rectory…

DOUBTING THOMAS DAVID | … David isn’t sure that becoming a priest is the right thing for him to do. “To spend my whole life without a wife, without children? To be alone?” he muses. At his prodding, she admits that there was a man who fell in love with her years back, but says no more. (Later, we learn that the man married, had children, and eventually killed himself — and Andrea’s phone number and photo were still in his wallet at the time of his death.) Then she tells him about the meeting she witnessed between Leland and the monsignor, in which Leland offered his pro-bono counseling services to the Church, positioning himself as a believer with psychology training — kind of the anti-Kristen. “If you’re having doubts, David, go satisfy them,” she says forcefully, “because the war is beginning!”

As he contemplates his future, David visits The Gospel Four Square, led by the pastor he met at the party where David punched someone. In addition to being a place of worship, Four Square also is a bustling community center involved in social justice work; the pastor reminds David that there’s a place for him there, if he wants. Later, David returns to talk to the pastor about why he left the Catholic Church: He fell in love with a nun. And what about spiritual attack? How does Four Square handle that? “Ah, the hocus-pocus stuff,” the pastor replies, laughing it off as “comic-book Christianity” as he maintains that racism is a much more potent spiritual attack than possession. 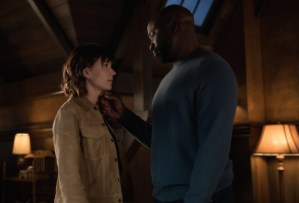 All of these thoughts are swirling in David’s head as he and Kristen chat in his room later on. “I’ve been really struggling this week,” he says. “I just don’t know if I’m doing the right thing.” She softly tells him that he inspires her. “I know you want to be good. There are so few people who want to be good. I’m worried what will happen if you turn away” from the priesthood,” she adds, saying that she likes their time together but his becoming a priest is “more important.” There’s a beat, then DAVID GOES ALL IN.

“Do you ever wonder what it would be like if things had happened differently?” he asks. “If I met you before all this? What would we say to each other?” She smiles, replying, “You know I do.” There’s a little hesitation, then David throws caution (and potentially his priest’s collar) to the wind: “Would we be in love?” She nods. I DIE. Then Kristen stands, walks over to David and places her palm on his chest. “Go get ordained,” she says, then walks out of the room. (Side note: My very in-depth and erudite notes from this sequence read as follows: ” AGGHHHHHHHHH.” Seriously, go back and watch this scene again. Katja Herbers and Mike Colter are so, so good.)

‘DAFFODIL’ | OK, back to the doll business. Edward follows Sheryl to school drop-off, and after the girls have gone inside, puts forth a proposition: “I ask you do to two things. If you do them, I give you one thing,” adding that the mysterious object in question is “invaluable.” But she has to agree without knowing what the first two things are. And because Sheryl is making even-more-terrible-than-normal decisions this season, she agrees.

The first task: Accompany Edward to a meeting in a corporate conference room, play a move-the-tile game until he says the word “daffodil,” then stand up and slap one of the meeting attendees across the face. She does it. As they leave the building afterward, Edward whispers something about her panties, then he’s falling to his knees and reaching underneath her dress. Looks like the elevator car isn’t the only thing that’s going down. Hey-o!

The second task: Accompany Edward to dinner, where he casually mentions “daffodil,” which triggers her to walk over to another table, imply in front of everyone that she’s having an affair with one of the men (whose wife also seems to be there). She does it.

And in the car afterward, Edward gives Sheryl her reward: “You have graduated,” he says as she unwraps a giant jar containing a shrunken head in liquid. It’s the noggin of his great-grandfather, he informs her. “You are my successor. This is your sigil.”

Indeed, at home, Sheryl finds ol’ jarhead on her Sigil Bingo sheet (aka that big map). She turns around to talk to Eddie and notices the new doll there, instead. So she pulls out her Eddie, draws some chalk lines on the ground, then positions her accoutrements: “Father,” she whispers, placing the shrunken head down, “son” (that one is Eddie) and “holy ghost” (the other Eddie). She kneels before them, crying. “I’m ready,” she says, hands folded in prayer. “Use me.”

Now it’s your turn. What did you think of the episode? Got predictions for the finale? Sound off in the comments!