In this week’s Evil, life is like an elevator: Sometimes it brings you to heights you might not have reached otherwise, sometimes it strands you with a sassy succubus to await your certain death.

And our core trio certainly hits some highs and lows during the hour, which finds David decking a guy at a party, Kristin bringing her kids along on an investigation and Ben tapping out final goodbye notes on his smartphone. Plus, there’s a very creepy urban legend mixed into the fun, in case your week was lacking in jump scares. (Read Aasif Mandvi’s take on the episode here.)

So take out your retainer, get comfortable and read on for the highlights of “E Is For Elevator.”

THE ELEVATOR GAME | Leland is faking his way through his exorcism sessions, and though he’s not fooling David, Father Mulvehill firmly states that they’re nowhere near casting the nefarious forces out of him. He also suggests that Leland take on a spiritual sponsor of sorts. “Maybe that should be David, because he knows me so well,” Leland says, and Mulvehill heartily agrees while David winces.

Meanwhile, Kristen and Ben meet with the parents of a teenage boy named Wyatt who disappeared. The police think Wyatt ran away; his folks don’t think so, based on a call they got from their kid the day after he went missing. Wyatt was screaming, and “He said, ‘Save me,'” his mother tearfully recalls.

There’s an interesting moment when Kristen — in just the latest in an expanding list of Weird Ish That Is Happening To Her — can’t physically way the words “possession” or “demonic” when explaining to Wyatt’s parents why she, David and Ben don’t interfere with police cases. But Ben steps in and they continue upstairs to examine Wyatt’s room… where they find a huge pentagram marked on the floor, hidden underneath the rug. And he carved “El Game” into his desk with the numbers 8-4-2-13-1 nearby.

“Oh, it’s the elevator game,” one of Kristen’s daughters says when she sees the numbers later, after Kristen comes home. And via the young ladies and an Internet video, we learn that The Elevator Game is a Slenderman-like urban legend that sends you to Hell; if you’re “haunted,” you should paint a pentagram in your room. All of the little Bouchards want to come with Kristen when she goes to Wyatt’s building to look at security footage, and even though that’s a terrible idea, MaybeDemon Kristen is all about making impulsive decisions! But oops, Lexis has an appointment with her math tutor… so Kristen says, kseeyabye! to her kiddo and leaves her alone at home. 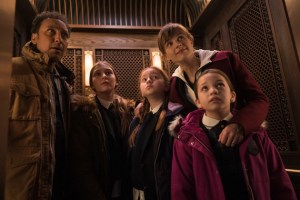 HALF THE GIRL SHE USED TO BE | So the Ladies Bouchard meet Ben the Magnificent at the hotel and play the Elevator Game, until they realize that the building is one of those in which the 13th floor is labeled 14th, out of superstition. (Side note: Am I the only one creeped out by that in real life? Like, the engineers who built the apparatus believe in science enough to create a lift that will carry hundreds of pounds… yet not enough to tempt fate by slapping the number 13 on the floor?) As they stand in the lobby, confused, a teen girl tells them that the Elevator Game does, indeed, work. And she knows, because she was friends with Wyatt and his girlfriend, Felicia, who went missing three months after he did.

The girl plays them a recording of Felicia playing the Elevator Game; the disturbing call is filled with static and distortion, and it ends with Felicia screaming. Intrigued, Ben recruits Vanessa — remember her? From Gotham Ghosts? — to help him dig deeper. She’s super not into rekindling anything with him, but she can’t help but get sucked into the Elevator Game case. So the two of them take a ghost tour, which includes Wyatt’s building and which fills them in on the story of a girl who got cut in half by the elevator in the 1960s. If you don’t finish the game, legend says, the “tekka-tekka girl” (named for the sound her bisected corpse makes as she drags herself along the ground) will haunt you forever. 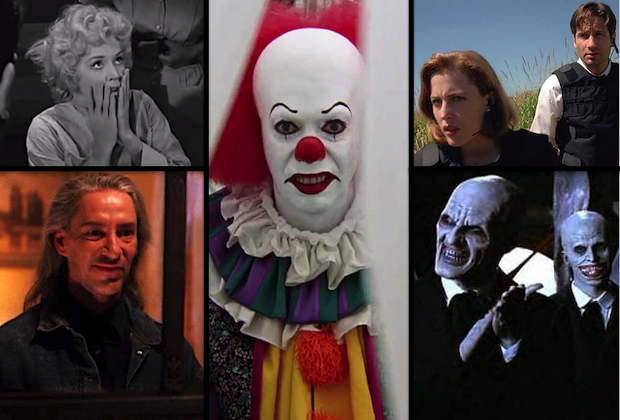 “How do we finish the game if there’s no 13th floor?,” Kristen wonders, and eventually winds up back at the building, solo, for another go. After she messes with the buttons a little, the elevator car stops between the 12th and 14th floors; she hits “Open Door,” and finds the car hovering halfway up the opening on the 12th floor. The doors won’t close, and Kristen is on her belly on the elevator floor, peering out, when she hears a weird dragging noise: Yep, it’s the fiendish tekka-tekka girl!

Kristen gets stuck between the elevator’s floor and the top of the 12th floor opening, and the girl is drawing ever closer, climbing the wall. Eventually, Kristen gets out of the situation with moments to spare, but she immediately calls Kurt: She’s sure that the hallucination she just had was a side effect of the new pills he prescribed. 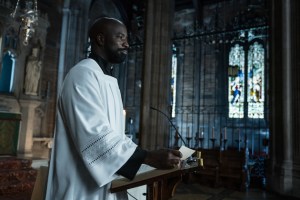 DAVID DECKS A GUY! | Where’s David during all of this, you wonder? Why, coming to terms with racism in the Catholic Church and his role in it, of course! The subject is first raised by Leland, no doubt to sow discord, who flat-out asks his spiritual sponsor how he deals with racial inequity in his beloved institution. Then David meets Kevin, a Black fourth-year seminary student who says that David is being groomed as a figurehead, “the great Black hope of the Catholic church.” Kevin invites David to an upcoming gathering of “renegades,” and David attends.

At the party, another man challenges David’s desire to stand by the Church; Future Father Acosta confidently states that he believes in “the whole nine yards” of Catholicism. Their argument grows more heated, and eventually the other guy pushes it somewhere ugly by declaring, “What a step up: Uncle Tom becomes Father Tom.” So David punches him (!).

The fisticuffs bring the soiree to a halt, and David quickly makes his exit.But a different man follows him out, identifying himself as a fellow believer in God and Christ. “I’m a minister in a gospel church here in Queens,” he says. And what’s more: “What the Catholic Church doesn’t do, we do,” he adds.

A few days later, David delivers a homily on racism during a church service — even though Father Kay really wants him to couch his language in order not to upset anyone (read: white people). He does a good job, and Kristen is there to support him. Leland is, too, eating popcorn in a rear pew (Ha!). After the service, Kristen hugs David, then answers a call from Ben. But it’s nothing but interference. She sees that Ben called four other times; David notices that he has three missed calls from their co-worker, as well. 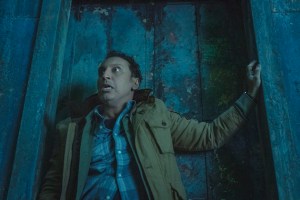 BEN SAYS GOOD-BYE | And that’s because Ben has managed to strand himself in the subbasement/hell dimension where Wyatt and Felicia ended up! Realizing that the “13” in Wyatt’s notes really meant the “1” and “3” buttons, pressed at the same time as the Call button, Ben rides the elevator down to Floor 00. The doors open onto blackness. He sees tiled arches in a massive space covered in gravel… and then the doors close and all he has is his iPhone’s flashlight to illuminate the creepy scene. He hears a skittering sound and moves his light until the beam falls on a woman’s body, wasted away and covered in bugs. There’s a man’s body nearby, in the same state. Freaked, Ben runs back to the elevator, only to realize there is no way to call it or open the doors. This is BAD.

Even worse: His phone is at 10 percent battery, and his mind is going to some very dark places. He imagines how it was as Wyatt and Felicia were dying, how she might have held him and tried to beat back the flesh-eating bugs as long as she could. “And here I am, without anyone to hold, and the swarm of bugs will get me, too,” Ben muses, crying a little. Guys, Ben is EMOTING. I am SCARED. (Side note: But Aasif Mandvi is pretty great in this ep, no?)

It turns out, though, that he’s not alone: His night terror, Abbey, suddenly appears. Granted, she’s not terribly comforting. She mocks him as he writes farewells to David and Kristen in the Notes app, then calls him “the height of hypocrisy” when he starts praying aloud. But that’s the moment that the elevator opens, revealing a puzzled David and Kristen standing inside. “Keep the elevator open!” Ben screams, running into the car and sobbing. Kristen catches him and tries to soothe him as he cries. Just over her shoulder, Abbey looks on, unimpressed.