Spoiler Alert: This post contains key details from Sunday’s episode of Evil. You know the drill!

Can someone give Evil‘s Ben a hug?

The show’s resident rational techie had quite a rough run in Sunday’s episode, which found him entombed in an apartment building’s horrifying basement, where he awaited certain death while being mocked by the female demon who’s taken to showing up at very inopportune times. (Read a full recap.)

Though Ben ultimately was saved from death by starvation and/or beetle, the incident left him sobbing, shaken and — portrayer Aasif Mandvi tells TVLine — questioning concepts about which he’d previously been certain.

We talked with Mandvi about Abbey the Night Terror, Ben’s suspicions about Kristen and a “mind f–k” of an episode coming later in the season that puts Ben in touch with one of his dead relatives. Read on to hear what he had to say.

TVLINE | The Kings tell you that Ben is getting his own night terror, Abbey. What’s your first reaction?
I was like, “That’s awesome!” The Kings are so great, because they do a little recap at the end of every season with the cast individually and they go, “What did you love? What did you not love? What worked? What didn’t work? What do you want to see for your character next season?” …I had talked to them about wanting to see more of Ben involved in the essential tension of the show, which is the idea of faith and the spirituality vs. the science of it all, and being more challenged in his own certainty about things and having to deal with that.

So they incorporated a lot more of that into this season, of Ben having these moments where he’s really challenged. Then when we got closer to production… [Robert called and said] that one of the things that’s going to happen to Ben is that he’s going to get, like Kristen had George in the first season. He was like “We’re going to have this succubus, this female demon visit Ben at night and make him crazy and start making him feel like he’s going crazy.” And of course it was great, because for me. I was like, “Oh, that’s exactly what I wanted!” 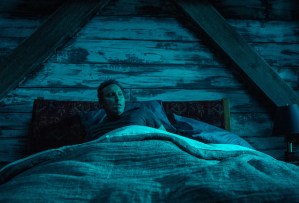 TVLINE | I have to tell you, I did not expect the retainer gag in Episode 3.
[Laughs] It’s so funny, so many people that I’ve talked to have talked to me about the retainer line… What was interesting when I was working on those scenes with the succubus, part of it is that Ben is a pragmatist. He’s a scientist. He’s an empiricist, so he doesn’t believe what’s happening at some level. And so he thinks, “OK, either this is really happening, which I don’t believe, or I am somehow conjuring this up in my own imagination?” And so, the question for me and the question for Ben was: If I’m going to conjure up a demon that is challenging me to face darker truths in myself, which I think is part of it, why would I give her a retainer? [Laughs] You know what I mean?

TVLINE | Can you tease what having Abbey the Night Terror around will do to Ben, who’s always so certain about everything?
Well, there’s more that’s going to happen, as well. Because, not to give anything away, but the succubus is just part of Ben’s being shaken, you know? Because… you see Vanessa come back, and then that relationship also has some twists and turns that also rattle Ben. The succubus becomes part of something, and also she’s representative of some dark stuff in Ben that he hasn’t come to terms with in himself, you know?

TVLINE | Yeah. In Episode 4, she serves as a companion of sorts for him, too, when he’s trapped.
For Ben, he can figure out his way out of anything. He’s smart enough to know that he can figure a way out, and in this instance, he can’t figure a way out. So he’s stuck, and that is incredibly terrifying. because he really does come face-to-face with his own mortality. I think one of the most interesting parts about it is that he prays an Islamic prayer, which goes back to his roots and is also the thing that he’s rejected. But he goes there and that’s when the door opens and Kristen and David show up.

TVLINE | Right!
That’s what’s so great about the writing. The timing of it is literally this light that shows up as he’s praying, and there’s Kristen and David. It’s, again, another way in which Ben gets rattled out of his certainty. Because it’s like, “OK, so I prayed, and then my prayer was answered. So what does that mean?” 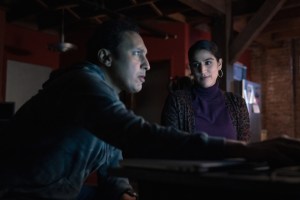 TVLINE | I want to get your take on the notes that Ben is writing before he gets rescued. I love my co-workers, but if I thought I were dying, I don’t know that they’d be the first people I’d be writing to. That scene clued me into the fact that maybe Ben doesn’t have a lot of people in his life.
Right. I don’t think he does. I think he’s a loner. And he’s close to his sister. He doesn’t have a great relationship with his dad. His mom is no longer alive. So, I think that David and Kristen are probably the two people in his life, you know, who actually get him. And not even get him, but just accept his quirkiness. I think he’s socially a little awkward on the outside, you know? But yeah, I can see that he doesn’t have a lot of friends. 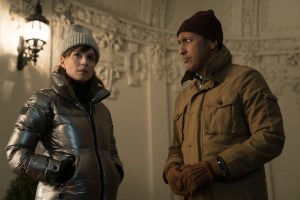 TVLINE | I’m enjoying this season how Ben and Kristen’s relationship seems to be warmer than it was in Season 1… but he’s still suspicious she might’ve killed someone.
Well, I think he saw something that made him suspicious, which is the blood on the leg.

TVLINE | Right.
And then she’s been acting very odd. I don’t think he knows exactly what is going on, and I don’t even know if it completely gets resolved this season, but he definitely has his suspicions. But again, he is feeling closer to Kristen just because their relationship has evolved, and they’ve all gotten closer. It’s funny, because Katja [Herbers] and Mike [Colter] and I were all strangers to each other in the beginning of Season 1 when we started the show, and now we personally are closer to each other and know each other better. I think that reflects also in the chemistry on the show. I think [Ben is] more invested in that friendship. But he also is the guy who, if he knew for certain that Kristen had killed LeRoux, I think he’d have a really hard time with that, you know? Because he is, at the end of the day, a person who probably isn’t going to let his sentiment around it override the sheer criminality of the act, you know? It’d be interesting to see how Ben, if he ever does find out that she’s really done it for certain, how he will react to that.

TVLINE | What’s coming up that you think will blow people’s minds?
We have an episode coming up where David and Ben and Kristen investigate this God helmet that allows them to like have visions of things, and sometimes some people feel like they see God. That’s a great episode. It’s a really interesting episode and it’s really a big mind f–k. [Laughs] And in that one, Ben gets to go back to India and visit his dead mother, which is all I’ll say about that. It’s really cleverly done and kind of fun.