The Conners on Wednesday revealed that the late Roseanne Conner sought divine intervention before her untimely death.

Nearly three years after losing her mother, Darlene stumbled upon a note scribbled in Roseanne’s Bible — a note presumably written sometime in 2018, shortly before her accidental opioid overdose. The cry for help read as follows:

Please take away this pain from my knees and my back. I can’t bear it anymore. I keep turning to the pills, but this is me, turning to you instead. Please help me. I have to keep working — and if you can just do this one thing, I will honor you forever.”

While Roseanne Conner was never portrayed as a deeply religious person (see clip below), The Conners revealed that Dan’s wife had always kept a Bible in the drawer next to the stove. Dan unveiled The Good Book to Darlene and Becky midway through Season 4’s second episode. 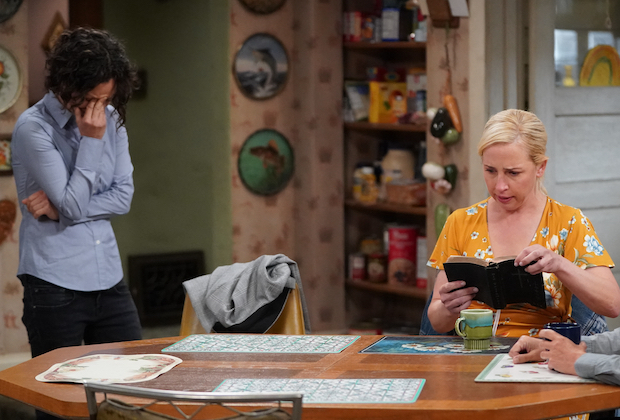 “She didn’t take it out a lot, but sometimes life would get to be a little too much, and that’s where she found her comfort,” the widower explained. “I think she found that it connected her with God. She put your names in there when you were born, and then she’d write little prayers asking him to watch over you. Of course, a few times, she wanted to smack you with it, but I said that sends a mixed message.”

During the 2018 revival, Barr’s character hoarded pain pills in lieu of having expensive knee surgery. Then in the Season 10 finale, Dan and Roseanne came into enough money to schedule the procedure. After Barr was infamously fired, and Roseanne became The Conners, it was revealed that Dan’s wife continued to take pain meds even after the surgery and eventually suffered a fatal overdose.

What wasn’t made clear during Wednesday’s Conners was whether Dan ever stumbled upon Roseanne’s biblical plea, or if Darlene was the first to see it. But now we want to know what you think: Do you believe that Roseanne Conner, who was never exactly a God-fearing woman, would have turned to The Man (or Woman) Upstairs for help with her addiction? Drop your thoughts in a comment below.