Big Brother added a new name to its history books on Wednesday night, crowning its first-ever Black winner after a whopping 23 seasons.

Big Brother's 12 Best Alliances of All Time — and the 5 Worst! 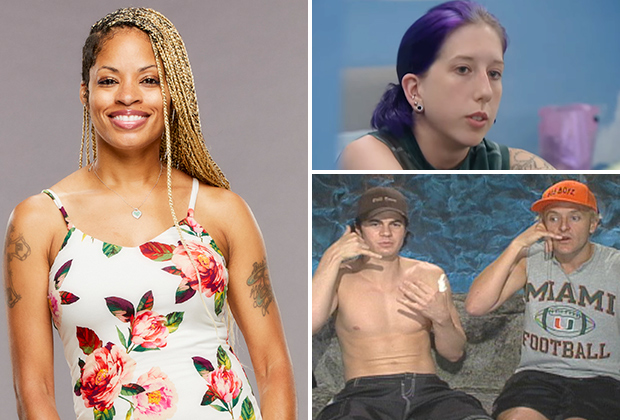 Azah Awasum, Derek Frazier and Xavier Prather were the last three houseguests standing at the top of Wednesday’s two-hour finale — and the way TVLine readers saw it, at least, Xavier was poised to win that $750,000 prize when all was said and done. Ahead of the finale, 78 percent of you said Xavier would win Season 23, while 76 percent said he should triumph over Azah and Derek.

But did Xavier reach the Final Two on Finale Night? And how did the jury votes shake out? Read on for the highlights of the Season 23 closer:

* After Xavier emerged victorious from Part 1 of the final Head of Household competition, it’s down to Azah and Derek in the pivotal second part, which involves correctly answering questions about the events of this season in the fastest time… but those answers appear on an oversized slot machine, which Azah and Derek must move with their bodies in order to find the right houseguests’ faces. It’s a physically grueling game for both players, but Azah ultimately bests Derek with a time of 13 minutes (compared to Derek’s 20 minutes).

But the potential choice that Azah will have to make next — whether to take Xavier or Derek to the Final Two with her — is weighing on her, and she starts to consider taking Xavier after Derek continues to disrespect her gameplay and remind her of his own Final Two deal with Xavier. Eventually, Azah is so fed up with Derek’s condescending behavior that she tells Xavier she’ll take him to the end instead of Derek; later, she breaks the news to Derek that she’s now considering evicting him, which he receives poorly. 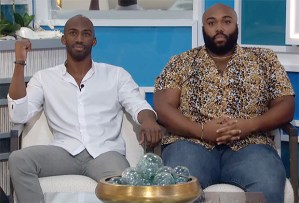 * Over at the jury house, Kyland joins the party, where he and the others discuss whether Xavier, Azah or Derek most deserves the win. “The only good thing I can say about Derek is that we have the same name,” Derek X. observes, cutting through everyone else’s efforts to make even a weak case for Derek F. Also, the bad vibes continue to radiate off Kyland, who stuns his fellow jurors when he suggests that Hannah and Derek F. played comparable games. Um…? It sure wasn’t Hannah’s naps that got their own segment earlier this season, sir.

* As it typically does, the third and final part of the HOH competition requires the players to correctly identify false statements about the members of the jury. And in an exact repeat of last season’s final competition, in which Nicole Franzel lost to Cody Calafiore after answering the first question incorrectly, Azah gets the first question wrong in this game, and even her seven subsequent correct answers aren’t enough to catch up: By a score of 8-7, Xavier becomes the final Head of Household. We can just skip to the end of the episode now, right? No need to pretend someone other than Xavier’s winning this whole thing? Well, there’s still an hour left, so let’s recap it for fun!

* Xavier evicts Azah, taking Derek with him to the Final Two. In her post-game interview with Julie Chen Moonves, Azah confesses that she would have taken Xavier with her to the end, had she won that last competition. 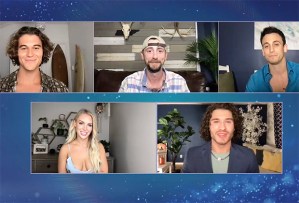 * Azah joins the jury, the jurors grill Derek and Xavier, and those nine crucial votes are finally cast. After a quick Q&A with the season’s first five evictees — Travis, Frenchie, Brent, Whitney and Christian — some secrets are revealed, including the actual professions of Claire, Hannah, Sarah Beth and Xavier, as well as Derek F.’s fun fact that he’s the son of heavyweight champion Joe Frazier, and Britini’s moving announcement that she was diagnosed with autism when she was young. On the not-so-moving side of things, Julie invites Kyland and Xavier to clear the air after last Thursday’s argument, and Kyland pulls a groan-inducing, “I’m sorry if you felt offended” on Xavier. Blech.

* Then, it’s at last time to reveal the names on those keys in the jury voting box. The history-making winner of Season 23 is… Xavier! He clinches the win in a unanimous vote, which only Dan Gheesling (Season 10), Cody Calafiore (Season 22) and Tamar Braxton (Celebrity Big Brother Season 2) have achieved in the past.

* But really, we all just want to know who won America’s Favorite Houseguest. It came down to Derek X. and Tiffany this season, and the winner is Tiffany! She gets $50,000, and there’s really no better way to end the season than that. Until February, folks!

Big Brother fans, how do you feel about Xavier’s victory? And did Tiffany get your vote for America’s Favorite Houseguest? Drop all of your thoughts in a comment below!