The three All-Stars who woke up in the Big Brother house on Wednesday morning have all reached the finale before. Two of them, however, wanted much different endings this time around.

Cody Calafiore and Enzo Palumbo respectively snagged second and third place in their original BB seasons, though Cody’s decision to take Derrick Levasseur with him to the end ultimately went down as one of the most bone-headed moves in series history. This season, both men hoped to redeem themselves on finale night — and a whopping 72 percent of TVLine readers predicted Cody would win the All-Stars season, while 66 percent agreed Cody should win.

Nicole Franzel, meanwhile, emerged victorious from BB18 and sought to repeat history on Wednesday’s finale, which would make her Big Brother‘s first-ever two-time champion if she could pull off the win. [pivots to address a different camera] But first, before an All-Stars winner was crowned, one last Head of Household competition — and one final, pivotal eviction — had to unfold. Read on for the highlights of the two-hour finale:

* First up, it’s Part 2 of the final HOH competition, which is a battle between Cody and Enzo. They must put the correct houseguests’ cardboard cutouts in front of different postcard backdrops and snap photos of them at the right moment, while ensuring that no gigantic, swinging pig heads — camera hogs, har har har — are peeking into the frame. (Honestly sounds like I’m describing a dream I had about this show, huh?) Enzo has a good grasp on which cutouts to include in each photo, but the swinging pigs give him some trouble, and it takes him 37 minutes to complete the competition. Cody, on the other hand, finishes the whole thing in less than five minutes, prompting Enzo to loudly vent his frustrations that he can’t win comps at the most crucial times.

Later, Cody and Nicole debate who they would take to the Final Two if they win Head of Household, and Cody seems completely torn, while Enzo tries to convince Nicole that evicting Cody is her best shot at winning the game. (He’s right! Listen to him, Nicole!) But when the jurors debate who deserves to win, all signs seem to point to Cody playing the best game, even though they often felt his jury management was disingenuous. 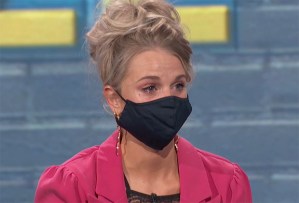 * In Part 3 of the HOH competition, Nicole and Cody must correctly identify false statements about the jurors and their time in the BB house. But Cody and Nicole submit different answers for the very first question — he gets it right, she gets it wrong — and that ends up making all the difference; Nicole’s never able to catch him, and Cody becomes the final Head of Household.

When we return to the living room moments later, Nicole is already in tears, and Cody looks as though he might vomit right there on the carpet. This eviction decision genuinely seems to be eating at him, and when he evicts Nicole, he doesn’t appear to relish it. (Enzo, on the other hand, can’t even wait until Nicole’s out the door to give Cody a huge hug. Come on, yo. Decorum.)

* After Nicole’s tearful post-game interview with Julie Chen Moonves, in which she says she’s not mad at Cody despite her heartbreak over his decision, the nine jury members grill both Enzo and Cody about their gameplay. To Enzo’s credit, even though he didn’t play as memorable a game as Cody, he seems to give much more palatable responses, whereas the jurors appear a little miffed by the credit Cody’s taking for his game moves.

* But then, after a conversation with the season’s first five evictees, it’s time to reveal the jury’s votes. The winner of Big Brother All-Stars is… Cody! He only needed five votes to win, so the confetti comes down after we see Ian, Da’Vonne, Kevin, David and Dani’s votes, all of which went in Cody’s favor. But Julie later reveals that Cody defeated Enzo by a 9-0 vote, which is only the third time that’s happened in Big Brother history. (Julie says it’s only the second time, after Dan Gheesling’s unanimous win in Season 10, but that’s a rude erasure of Tamar Braxton’s win on Celebrity Big Brother.)

* The last order of business is the reveal of America’s Favorite Houseguest, and that’s Da’Vonne! So not everything about this season was a disappointment, then.

That’s a wrap, Big Brother fans! How do you feel about Cody’s win? Cast your vote in our poll below, then hit the comments with your full reactions to the finale!