Those of you who were eagerly waiting for The Masked Singer to resolve its premiere cliffhanger were rewarded Thursday: Episode 2 revealed Mother Nature’s identity at the very top of the hour.

When she removed her very unnerving faux face, the green goddess was actually Independence Day‘s Vivica A. Fox (whose name definitely showed up in the comments for the premiere recap. You guys are GOOD.)

The rest of the episode introduced two wildcard contestants — Hamster and Baby — and the Take It Off Buzzer. The buzzer is intriguing: If a judge thinks he or she is 100 percent certain about a singer’s identity, he or she can push the buzzer, and the performer must immediately remove their mask and go home. If the judge is right, he or she racks up two extra points toward the Golden Ear Trophy. If the judge is wrong, he or she will be “significantly punished,” per Nick Cannon. Oh, and it can only be pressed once per group of competitors. 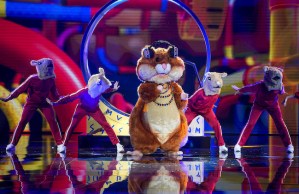 HAMSTER | I dig this contestant’s sparkly headphones and cute cheeks; the neverending high-energy comedy, I could do without. He sang “Pretty Woman” by Roy Orbison and it sounded great, but that’s a pretty easy one to crank out, no? Clues included: “My body is shaped very much like a hamster,” “I’m a guy who’s always jumping from one project to another,” goldfish, a poster for Alcatraz Island, “It’s sunny” and a baseball bat. Also? “I’m way f–king taller” than Danny DeVito, Hamster informed us. Noted!  (My guess: A comedian, but other than that, I got nothing.)

SKUNK | After last night’s episode, a couple of you guessed that Skunk was singer Faith Evans, and after what we saw and heard tonight, that seems to be the case. “I had a full-ride scholarship when I got some unexpected news that changed everything,” she said in her clues package, which tracks with Evans’ attending Fordham University but leaving to give birth to her daughter, Chyna. She sang James Brown’s “It’s a Man’s, Man’s, Man’s World,” and slayed it. Other clues included: Big Book of Acting, Iron Out Your Swing and a projector. (My guess: Evans) 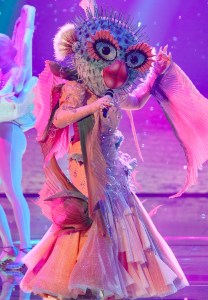 PUFFERFISH | I don’t know who Pufferfish is, but I greatly enjoyed her performance of Dua Lipa feat. DaBaby’s “Levitating,” right down to when she dropped her voice an octave to do the rap. Clues included: mentions of a highly religious upbringing, a diary, a cardinal and “I’ve got bars, I’ve got moves, but I’ve also got letters.” (My guess: no clue.)

BULL | Tonight’s song choice, “What Hurts the Most” by Rascal Flatts, wasn’t perfectly suited to Bull’s style. But wow did he sing the heck out of it! Clues included: Disney Concert Hall, memories of putting on shows in his garage as a kid, and “Nothing makes me happier than the cheer of the crowd.” (My guess, which is gleaned from some of your guesses last night: American Idol alum/RuPaul’s Drag Race‘s Todrick Hall.)

BABY | The night’s last performer was “a big-ass baby,” as Nick Cannon so succinctly put it. Was Baby’s accent a put-on? Could it be true that he really replaced Arnold Schwarzenegger in a movie? I have no idea about anything except for the fact that he’s definitely not a professional singer. Clues included: “I was part of the baby rat pack,” references to film sequels and radio play, the White House and “the need to feed.” (My guess: Nada.)

THE UNMASKING | Pufferfish was unmasked, and she was revealed to be singer Toni Braxton. And because Braxton has lupus, she did every performance with a mask on underneath her big mask.

Now it’s your turn. What did you think of the episode? Log your opinions and guesses in the Comments!