You got us, The Masked Singer. We thought we knew all your tricks, and still, you got us.

The Season 6 premiere on Wednesday promised a double elimination, and it delivered… technically. Of the five new covert crooners we met during the hour, two were called upon to leave in the final moments. But only one was unmasked, leaving viewers to have to come back for the premiere’s second half — airing Thursday at 8/7c on Fox — to find out exactly who was wearing that (truly terrifying) costume.

Read on for the rundown, as well as to learn who was actually revealed at the end of the episode. 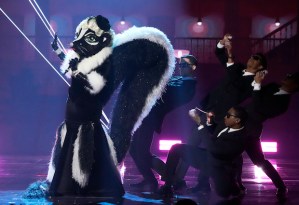 SKUNK | Skunk seems like a diva — no judgment, she basically told us herself with that clue of a vase emblazoned with a big D. I didn’t get it until I pronounced “vase” the snooty way. D-vahhhhs = divas, I guess? Her vocals on Sam Smith’s “Diamonds” could’ve been a little better supported, but she seemed comfortable on stage; if she’s not a singer by profession, she’s certainly sung in front of a crowd before. Clues included: a train; a newspaper with a photo of judge Jenny McCarthy and the headline “Has the Gold Ear Winner Lost Her Mind?;” Seoul, South Korea; “There are always two sides to every story,” and mention of taking a break “to focus on family.” (My guess: No clue. I agree with the judges that it’s probably someone of Mary J. Blige’s ilk, but not her. Maybe Anita Baker?)

PUFFERFISH | “My voice was always different, and not necessarily in a good way,” Pufferfish told us in her clues package. But her performance of Doja Cat’s “Say So” was strong; hard to tell, though, whether the affect she used in the rap section is any clue to her natural speaking voice. Clues included: a disco ball, an electric guitar, a boomerang, and “I know a thing or two about defending myself.” (My guess: Nope. Nothing.) 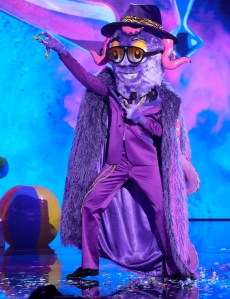 OCTOPUS | Whoever is inside the gangly sea creature either is super tall or is wearing stilts, which naturally makes me think he’s a basketball player and there naturally means I have zero idea who he is. His take on Little Richard’s “Tutti Frutti” was surprisingly in tune, and undeniably fun to watch, but more in the “wow, I didn’t know my co-worker was so good at karaoke” way and less in the “wow, I’m definitely watching a seasoned performer” way. Clues included: “I reached success at a very young age,” gold teeth, “Everyone took me smiling as me not being serious,” “People wanted me out, and I fell,” blocks that spell ABC, “I’m a lucky guy” and mention of The Masked Singer being his mother’s favorite show. (My guess: No clue. I’m killing it so far this season, guys!)

MOTHER NATURE | Why, exactly, this costume was so disturbing, I cannot tell you. But believe me when I say I found it very hard to look Mother Nature in her unmoving face throughout the episode. She made Night Angel look like a cuddly cherub in comparison! In the minus column: Her performance of Diana Ross’ “I’m Coming Out” wasn’t the most energetic thing I’ve ever seen. In the plus column: She worked Whack-a-mole into her choreography, and who wouldn’t love that? Clues included: “I’ve done it all… but there’s one thing I’ve never had a chance to do: be a mother,” a 1978 penny and Wayne Brady. (My guess: Her laugh initially made me think comedian Tiffany Haddish, but now I’m not so sure…)

BULL | The evening’s best, by far, was Bull, who started his rendition of Train’s “Drops of Jupiter” in the judges’ box and owned every inch of that soundstage by the time he was done. “I’m actually quite shy about singing,” he said… but the way he dropped into that choreography with ease leads me to believe he’s done the song-and-dance thing before — and well. Clues included: He comes from a small town, Cooperstown on a map, a lion, an astronaut and “I became my own boss, and eventually Hollywood — and even Forbes — took notice.” (My guess: Nada.)

THE UNMASKING | Octopus was unmasked and revealed to be Los Angeles Lakers pro basketball player Dwight Howard. Then Mother Nature was eliminated… but you’ll have to wait until tomorrow night to find out who she really is! Don’t worry: I’ll be back with my stellar and insightful guesses for Round 2.

Now it’s your turn. What did you think of the premiere? Grade it via the poll below, then hit the comments with your guesses about Mother Nature’s — and everyone else’s — identities!